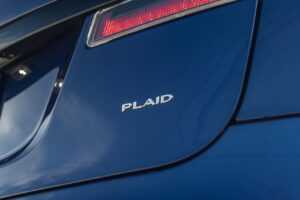 Tesla can’t just make a car. They have to deliver an experience that’s fresh, innovative, fast as all hell, and sometimes a little perplexing, too. The Model S Plaid follows this recipe to the letter, and it’s probably the best Tesla to date. However, you might have noticed it’s missing a typical shift lever.

In fact, Tesla has ditched the old setup in favor of a predictive shifting system that puts the car in Drive or Reverse without the need for driver interaction. Should the driver need to take over, they can use a touchscreen-based option, which requires the operator to drag a little icon of the car toward the top of the screen for Drive or toward the bottom of the screen to engage Reverse. It’s arguably an answer to a question no one asked, even if the setup proved rather intuitive during our time testing the 1,020-hp electric sedan. Well, at least until the infotainment system crashed.

Fortunately, Tesla prepared for such a situation, as the automaker fits a small touch-sensitive control panel beneath the infotainment display that includes more traditional shifter controls (and the hazard light switch). Accessing these controls requires a generous tap of the panel (or the infotainment system to crash), otherwise, the icons for the shifter controls are hidden from view.

Admittedly, we prefer the column-mounted shifter stalk of prior Model S EVs. That said, we appreciate that Tesla’s included this hidden shifter as a failsafe in the event of an issue with the infotainment system.