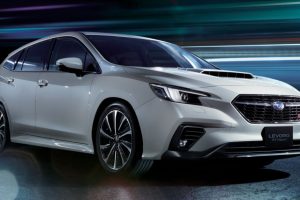 This is it, the all-new Subaru Levorg. The second-generation wagon has made its debut in Japan and becomes the latest model to make the switch to the Subaru Global Platform (SGP), which also underpins the Ascent, Forester, Impreza and XV.

Suffice to say, the finished product appears to remain faithful to the 2019 and 2020 show cars, with a bolder styling approach based on the company’s “Dynamic x Solid” design philosophy. The pointier front-end is highlighted by a larger, hexagonal-shaped grille that cuts into the kinked LED headlamps.

Meanwhile, the lower apron features scalloped sections that hold the fog lamps and LED light strips, with a noticeable crease linking the latter, just above the centre intake. On STI Sport variants, a portion of the bumper lip gets a dash of chrome to distinguish themselves from regular Levorg models, along with some badging at the front and rear. As before, the bonnet is where you’ll find an air scoop that feeds the turbocharged engine underneath, which we’ll get to later. Down the sides, squarish wheel arches can be seen instead of rounded ones on the outgoing models, complemented by muscular haunches. Two distinct character lines can also be seen from this angle, including near the base of the doors as well as another running through the door handles.

Around back, the C-shaped taillights have been slimmed down from before, with a black trim piece linking them instead of a chrome. Further down, you still get dual exhaust outlets, which are now joined by triangular-shaped housings for the reflectors.

With the reveal, we finally get a good look at the wagon’s interior, which bears a close resemblance to current Subaru models, but with some major twists. The most prominent is the 11.6-inch, portrait-format touchscreen that takes up the centre of the dashboard, flanked by two vertical air vents, which provides access to all infotainment and climate functions. The big screen also sees the end of the secondary display found on the top of the dash, as seen in the outgoing model.

However, where one display is removed, another takes its place. In front of the driver is a new 12.3-inch digital instrument cluster display that can be configured to show a variety of information, including driving-related data, navigation and onboard active safety systems. Lesser, non-EX variants make do with a smaller 7-inch unit instead.

Additionally, unlike other Subaru models, the centre console is a lot more minimalist, with just the gear lever, electronic parking brake switch and around-view monitor button residing in the space. The slim air vents in the corners mimic the look of those beside the centre screen, and are of a new design as well. As with the exterior, STI Sport variants get additional touches to showcase their sportiness, including red stitching, STI badging and red accents for the digital gauges.

The larger dimensions also help to promote boot space, which now stands at 561 litres from 522 litres, inclusive of the underfloor stowage. The loading aperture is now 1,070 mm wide, while the depth and height are 1,602 mm and 771 mm respectively, so loading most items shouldn’t be much of an issue. To go along with the new skin and platform, the Levorg also gets a new 1.8 litre turbocharged boxer four-cylinder petrol engine. Codenamed CB18, the direct injection unit churns out 177 PS (174 hp) from 5,200 to 5,600 rpm and 300 Nm of torque from 1,600 to 3,600 rpm, with drive going to all four wheels via a Lineartronic CVT and Subaru’s Symmetrical All-Wheel Drive system.

In Japan, the Levorg will be available in six variants – GT, GT EX, GT-H, GT-H EX, STI Sport and STI Sport EX. Only the STI Sport cars come with a more comprehensive drive mode system, with four options – Comfort, Normal Sport, Sport+ and Individual – selectable via buttons on the steering wheel. Every other variant makes do with the carmaker’s SI-Drive system that consists of just two modes – Intelligent and Sport.

Other safety improvements include the additional of a pedestrian airbag that deploys at the base of the front windshield, while the others are found in the cabin front, side, curtain, driver’s knee. Along with the Starlink SOS feature, these are Subaru’s initiative to reduce the number of fatal accidents to zero by 2030.