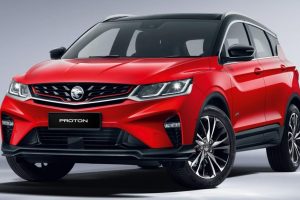 And here it is! The hotly-anticipated 2020 Proton X50 has been officially revealed by the national carmaker, showing off the new compact crossover with the trademark Infinite Weave grille, blacked-out roof and red interior. Looks mighty good, doesn’t it?

There are little surprises here, of course, with it being very closely based on the Geely Binyue (or Coolray in the Philippines), with just the grille and Proton logos marking it out. Nonetheless, it’s a handsome and thoroughly modern design, far more edgy than its bigger brother, the X70.

Design highlights include the subtle red splashes on the grille, both front and rear brake calipers and of course, the black and red interior. The high-angle view shows off a panoramic sunroof too, which is definitely a first for this class of cars. Not too long ago, we also sighted the key fob that comes with the car, which doesn’t differ heavily from its counterparts in China and the Philippines, save for the Proton script at the back.

There are no specifics released just yet, but the Proton X50 is likely getting a 1.5 litre turbocharged and direct-injection three-cylinder petrol engine with 177 hp and 255 Nm of torque, paired with a seven-speed dual-clutch transmission as available in both China and the Philippines. The 0-100 km/h time as claimed by Geely is 7.9 seconds.

Built on the modular BMA platform, the X50 is expected to be offered with class-leading safety features. Six airbags and electronic stability control will be standard, while the upper variant(s) are likely to have autonomous emergency braking (AEB) and even adaptive cruise control (ACC) with active lane keeping assist. Proton CEO Dr Li Chunrong even confirmed that it will get a full-fledged Level 2 semi-autonomous driving features!

Now that we have our first official look at the new Proton X50, it’s clear that we’re very close to the new model’s official debut. Li himself mentioned to expect big news this coming Tuesday, so as usual, stay tuned to paultan.org!