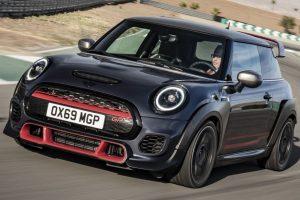 Aside from the MINI Cooper SE, BMW Group Malaysia has also launched the new MINI John Cooper Works GP. In stark contrast to its pure electric sibling, the GP takes Oxford’s internal combustion engine to the absolute zenith, becoming the hottest, most hardcore MINI you can buy.

It’s also the most expensive MINI you can buy – it’s priced at RM388,888 on-the-road without insurance, and with the sales and service tax (SST) rebate, this figure drops to RM377,491. The GP is limited to 3,000 units worldwide and Malaysia gets an allocation of just ten.

The secret to the GP’s cili padi performance lies under the bonnet. Here, you’ll find BMW’s most potent four-cylinder ever built – an extensively modified B48 2.0 litre turbocharged engine also found in the Clubman and Countryman JCW, along with some BMW M Performance models. It gets a reinforced crankshaft, new pistons, bushless connecting rods and a new torsional vibration damper with optimised cooling. On top of that, there’s a new turbocharger with a blow-off valve, integrated into the exhaust manifold. The direct fuel injectors are also more precise and have an increased flow rate, while the larger oil sump has been reshaped. Last but not least, the cooling system gets twin coolant coolers, a bigger expansion tank, a unique coolant storage module and a more powerful electric fan to cope with the increased outputs. All in all, this engine kicks out 306 PS from 5,000 to 6,250 rpm and 450 Nm of torque from 1,750 to 4,500 rpm.

Sadly for purists, you can no longer get the GP with a manual gearbox, the F56 version being only available with an eight-speed automatic transmission (incorporating a Torsen mechanical limited-slip differential). Still, the performance figures – which include a zero-to-100 km/h sprint time of 5.2 seconds and an unrestrained top speed of 265 km/h – should be enough recompense. A specially-designed exhaust system, fitted with twin brushed stainless steel tailpipes, adds some aural drama.

That’s just the start – to save weight, the GP, just like its predecessors, is only available as a two-seater. It also comes with a whole host of chassis tweaks, such as stiffer engine mounts, a front strut tower brace and a massive rear brace that takes the place of the rear seats. Going hand-in-hand with the increased body rigidity is the retuned suspension. For a start, the track widths have been increased for the first time on the GP, necessitating the fitment of wider fenders to clear the 18-inch forged alloy wheels. Those alloys weigh less than nine kilograms apiece and come in a distinctive eight-spoke design, shod with 225/35 R18 tyres.

Setting the GP apart from lesser models visually are the aggressive aerodynamics, consisting of a unique front air dam design, a larger front splitter, a beefier rear diffuser and a massive bi-plane rear wing. The boxy wheel arch extensions are made of carbon fibre and not only hide the wider track but also optimise the flow of air. The numbering of the limited series is applied to the front wings using a new paint transfer process. Inside, you’ll find JCW sports seats with integrated headrests, stainless steel pedals and a unique three-spoke steering wheel with a 3D-printed metal 12 o’clock marker. The passenger-side trim panel, which bears the serial number, is also 3D-printed, while the instrument cluster is a 6.5-inch digital display much like the Cooper SE, with unique graphics and displays.

Just one colour combination is available for the GP – Racing Grey with a Melting Silver roof and door mirrors, gloss black exterior trim and red side stripes and highlights. Inside, you’ll find leather and Dinamica microfibre upholstery, red GP logos and the gloss red rear brace.