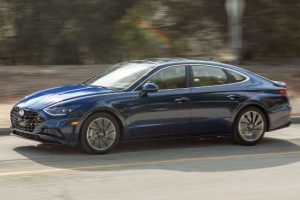 Not long ago, I wondered how I ever lived without a rearview camera in my car. Fast-forward a few years, and I wonder how I ever got along without adaptive cruise control tech, a major stress saver on highway drives and a feature that is now common on mainstream vehicles, including the Hyundai Sonata. Not all these systems are created equal, however; so how well does the Sonata’s smart cruise control work?

Every Sonata includes adaptive cruise control with stop-and-go functionality. Our year-long tester takes it one step further with Highway Driving Assist, which helps keep the Sonata centered in its lane. The tech can also help the car adhere to speed limits based on GPS data. Although it’s not perfect, this semi-autonomous system is quite successful at easing the driver’s workload. It keeps a reliable distance between the car in front and maintains its promised speed, even on hills, while handling stop-and-go traffic with aplomb. One downside: Sometimes it’s a bit slow to catch up when the traffic ahead starts moving faster. The system also often veers to the left side of the lane within the lane markings. Steering assist isn’t always reliable in major curves, but it’s quite precise on relatively straight portions of a highway.

The system doesn’t automatically change lanes for you like a Tesla would. But I do appreciate that when I’m in the process of switching lanes, it speeds up when necessary to match the flow of traffic.

Speaking of changing lanes, the Sonata offers another very helpful feature called Blind View Monitor. Whenever you activate the turn signal, an image appears on the instrument cluster display that provides a live view of the lane you intend to switch into, revealing any cars that could be in the way. It’s an excellent feature, although it took me a while to get in the habit of using it. The image can appear a little bit grainy at night.

So how much does this tech cost? If you get Highway Driving Assist as part of a $2,700 technology package on the SEL Plus, you’re looking at a price tag of around $32,000. The feature is standard on the N Line and Limited models, which cost around $34,300 and $35,000, respectively. It’s worth the consideration if you frequently drive long distances. Blind View Monitor is standard only on the top-dog Limited.