2020 Audi S4 Review: Lost in the Shuffle or Ready to Hustle?

In a crowded field of sports sedans, the Audi S4 has gotten lost in the shuffle a bit. New entries including the Genesis G70 and redesigned BMW 3 Series have recently stolen much of the thunder, but Audi gave the 2020 S4 a refresh that it hopes will help the performance variant jump back to the front of consumer’s minds. I headed to Palm Springs, Calif., to see how the updates shake out and if the S4 has enough to stand toe-to-toe with the rest of the class. (Per our ethics policy, Cars.com pays its travel and lodging expenses for such automaker events.)

The 2020 S4’s changes echo those also found in the 2020 A4 that include new styling (especially up front) and an extensive reworking of the dashboard and multimedia system. It’s still hard to tell these two cars apart, but there are some S4-only flourishes like a quad-tailpipe exhaust system, subtle rear spoiler and aluminum caps on the side mirrors. Anywhere more than 50 feet away, however, and you won’t catch those unless you have a keen eye.

This makes the S4 a bit of a sleeper car. It looks like an A4 but has a lot more power hiding under the hood (101 or 161 more horsepower depending on which A4) and some serious suspension upgrades.

Before I drove the S4, I tested the larger Q7 three-row SUV that got a 2020 refresh of its own).. The two vehicles actually share the same engine and transmission combination: a turbocharged 3.0-liter V-6, eight-speed automatic transmission (traditional torque-converter automatic versus a dual-clutch transmission) and standard all-wheel drive. Initially, this didn’t bode well for the S4 given the Q7’s powertrain put a real damper on the driving experience. A performance car without a performance engine would be even more disappointing.

Not all hope was lost for the S4, however. It gets some important changes including unique tuning and transmission gearing, plus it ditches the 48-volt mild-hybrid system found in the Q7. Those changes end up working for the better in the S4 (as does the car being 1,235 pounds lighter than the Q7 55 TFSI variant).

The S4’s engine and transmission feel tightened up and it’s much more responsive to throttle inputs. Those tuning changes also give the S4 349 hp and 369 pounds-feet of torque, just like 2019. There’s still a tad more delay than I’d like to find in a performance-oriented sedan wearing an S badge, but it’s at least livable, and the way the car blasts off at around 2,500 rpm helps make up for it. The S4 is estimated by Audi to run from 0-60 mph in 4.4 seconds, but it feels quicker than that to me.

My vehicle was equipped with the S Sport Package ($2,500), which included an adaptive damping suspension, red brake calipers and a sport rear differential that adds torque-vectoring capability to the all-wheel-drive system. Audi says 75% of S4 buyers will opt for this package, and it’s a good idea if you intend to drive the car for fun. The adaptive damping suspension doesn’t overdo it in Dynamic mode; I left the car in that setting for the majority of the drive and it didn’t feel too busy while maintaining a welcome sense of tautness.

I wish I could say the same for the car’s steering, which lacks both weight and feedback. Audi does offer a Dynamic Steering option that might help in that regard, but my test vehicle didn’t include it. When you start to hustle the S4 through the corners, its capability is readily apparent, but the whole experience feels a bit numb. A lack of steering feel, the muted exhaust note (though it sounds great outside of the car) and a hint of lag from the gas pedal all contribute to that feeling of disconnect. You’ll go fast, but it won’t make your heart race.

The S4 gets the same interior updates for 2020 as the A4, with the biggest change being a brand-new multimedia system that ditches the old rotary dial controller for a large 10.1-inch touchscreen. Even better, it doesn’t opt for the dual-screen setup found in the Q7 (among others), keeping physical climate controls that are easier to use. The screen looks great and responds quickly enough to inputs. I was also grateful that I could reach the far side of it without leaning out of the comfortable sport seats, though that also meant that I left fingerprints all over it from just a few short hours of use. (The screen is a magnet for prints, so keep a microfiber cloth handy to clean it off regularly.) Wireless Apple CarPlay and wired Android Auto come standard, and a USB-C port has been added up front.

The biggest problem I have with the system is a common one with the most recent Audi vehicles: a volume knob that prefers to hang out with the passenger. This time it’s also tucked behind the gearshift, so you have to reach over or around it to reach it if you want to adjust the volume. The button does double duty as the tuning/track-skipping controller, which just compounds the issue.

The car’s dimensions haven’t changed in the refresh, so the backseat is still tight and there’s a significant floor hump that makes it complicated to fit three folks. If you have taller passengers, you’ll have to be smart in arranging the seating to allow everyone to fit. I’m just under 6 feet tall and I had trouble fitting behind myself comfortably, though visibility is actually pretty good thanks to rather large rear windows. 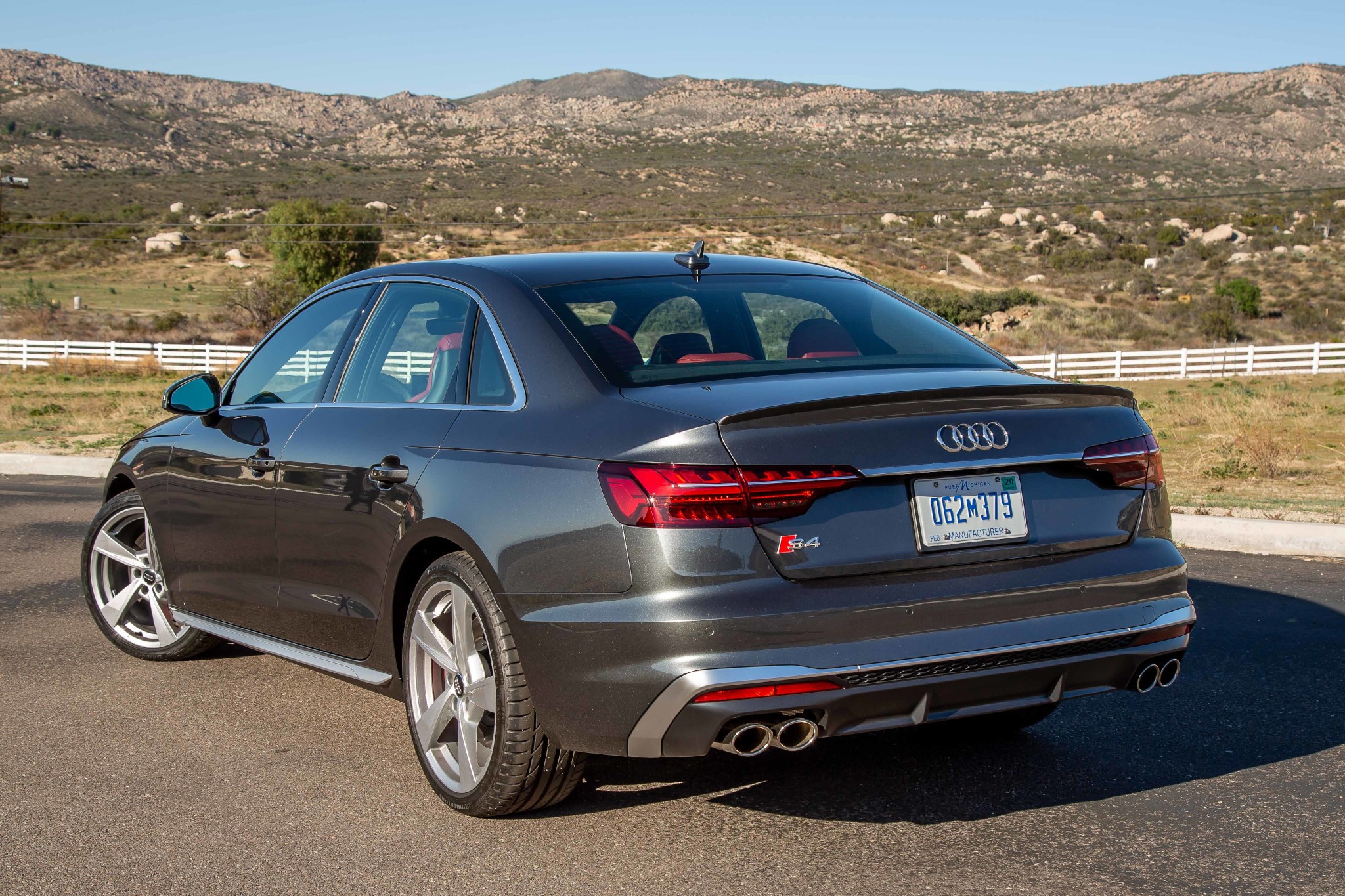 S4 Price: What’s It Going to Cost Me?

The S4 starts at $50,895 (prices include destination) and comes in three trim levels, much like the A4: Premium, Premium Plus and Prestige. The starting price is marginally less expensive than 2019. My test vehicle was a mid-grade Premium Plus with some extra additions, including the S Sport, Navigation and Driver Assistance packages. This bumped the price up to $62,840, which isn’t cheap but is comparable to the rest of the field. The 2019 BMW 330i we last tested cost $57,420 and the 2020 BMW M340i we tested cost $69,570, which puts the S4 in the middle of those cars when it comes to both price and performance.

Against the M340i, the S4 doesn’t really stand up. The BMW sprinted from 0-60 mph in just 3.89 seconds in our testing, which is a different world than the S4’s claimed 4.4-second time. An RS 4 might have a better shot, but that car is only offered as an S4 Avant wagon in Europe at this time — rats. I’d also put the S4 behind the 3.3T version of the G70 that we owned for a year., The G70 3.3T might not be quite as fast as the S4 in a straight line, but it’s an absolute joy in the bends. Swap the G70’s steering into the S4 and then you’d have something.

There’s a lot I liked about the S4: The interior changes are an improvement and I think its styling updates look great (especially those aluminum trim pieces around the air inlets). Until you get close to it, it can be hard to distinguish from the standard A4, and that makes it somewhat of a sleeper car. That exhaust note ends up being a solid analogy for how it ultimately feels to drive the S4: From the outside, it will sound like you’re having a blast, but from the driver’s seat, the experience goes by with more of a yawn than a bang.