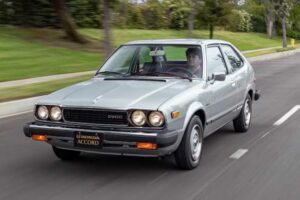 I am trying to drive this first-generation 1978 Honda Accord like the museum piece it is, and the Accord doesn’t like it one bit. I’m short-shifting at 3,000 rpm, and the Accord is hesitating and bucking in response, as close to an armed revolt as a Honda ever gets.

But now the on-ramp to the 110 freeway looms ahead, and I can’t afford to be gentle. The Accord’s 68-hp 1.6-liter four-cylinder engine produces a mere 85 lb-ft of torque, and I’m going to need every last ounce-inch. I downshift to second and mat the accelerator, wincing as the tach climbs towards the 6,000 rpm redline—and the Accord loves it! The engine’s buzz transforms to a meaty snarl, and the 43-year-old Honda pulls cleanly and strongly, if not exactly quickly, right up to freeway speed.

Soon I’m doing an indicated 80 mph (a true 72 mph according to GPS), and the Accord feels smooth and stable, its engine humming happily. The Honda seems eager to go and go and go, and I feel as if I could point its little noise east and drive all the way to New York. Simple and reliable, that was Honda’s unique selling proposition in 1978. Nearly half a century later, it still applies.

Finding the right historical perspective for the first-generation Accord is difficult, because it’s not merely an old car; it’s the old car that changed the entire American automotive industry. Seen through modern eyes, this ’78—a denizen of Honda’s unofficial Los Angeles museum and a stand-in for the first-year 1976 Accord—does indeed feel like ancient history, a distant ancestor of today’s Accord whose only discernible relation is a few common nucleotides in its DNA. The first-gen Accord is even smaller than it looks in the photos; we’re so used to 18-inch-and-larger wheels that the Accord’s 13-inch steelies produce an optical illusion of greater size. In truth, the Accord is scarcely an inch longer—and three inches narrower—than a Honda Fit.

But there’s another way to consider this car, and that requires casting your mind back to the darkest days of the malaise era, when the Big Four (AMC still existed!) were struggling to deal with new pollution standards and a new consumer demand for better fuel economy. Saddled with clumsy emissions equipment, American cars were hard to start and ran like crap, and their builders were falling all over themselves to slash horsepower and heft.

Honda, meanwhile, was trying to make its cars bigger and faster. It had already made its small-car beachhead in the U.S. with the Civic, and the Accord was Honda’s first serious attempt at something more substantial. For all its thoughtful touches—more on which in a few—the very first thing I notice is how easy the Accord is to cold-start. One pump of the accelerator, one turn of the key, and the Accord’s engine springs to life—typical today, but a minor miracle in 1978.

It’s all the more miraculous when you consider that the Accord was saddled with its own complicated lean-burn fuel system, called CVCC. The Accord’s 1.6-liter CVCC engine is a stroked version of the Civic’s 1.5, with a 12-valve head, ignition prechamber (yes, just like an old diesel), and a three-barrel progressive carburetor. It was an embarrassment to the domestics who whined about the costs of adding a catalytic converter—CVCC didn’t need one.

Not that CVCC was perfect. Look at the under-hood pics and you’ll see two heat shields sandwiching the carburetor. Honda located the carb right above the exhaust manifold, and early CVCC engines had an unfortunate habit: When you shut them down, the gasoline would boil out of the fuel bowl and condense in the intake manifold. Restarting sucked that gasoline into the engine, prompting my past-era colleagues at MotorTrend to dub it “the self-flooding carburetor”. (The heat shields seem to have mostly solved the problem. Still, while most carbureted cars recommend depressing the accelerator slightly when warm-starting, this Accord is the only car I’ve driven that actually means it.)

The warm-up is slow. The engine races for several minutes, scenting the air with the unique fragrance of catalyst-free exhaust. A light tap on the gas pedal drops the engine down to a slower idle, and the Honda and I are ready to go. I shift into first gear and the Honda takes off without stumbling, a feat few domestic cars of the era could manage without a lengthy warm-up drive (crossing a state or two was usually sufficient).

Babying the Accord, as I noted, makes for less-than-ideal progress, so I ditch the kid gloves, feeding in more power and letting the revs rise to 4,000 rpm or higher before shifting. The Accord is not quick—back in ’78, we timed it at 15.2 seconds to 60 mph—but it responds eagerly to this more aggressive driving style, accelerating smoothly.

On MotorTrend‘s test route in Palos Verdes, the Honda shows me more of why it was the most in-demand car of its era. The clutch is light and the shifter remarkably precise, characteristics that would become a Honda trademark. The low beltline and compact size make for excellent visibility—there’s no right-side mirror, but a glance over my shoulder tells me more than any side-view camera could. Forty years on, the cabin is mostly rattle- and squeak-free. But what really blows me away is the steering.

Power steering was new to Honda in ’78, and was standard in the then-new LX model I’m driving. Available exclusively in silver or maroon paint, the luxury-themed Accord LX added air conditioning, a clock, a cassette deck, posh burgundy upholstery, and power assistance that my MT colleagues of old were positive the car didn’t need. The non-assisted Accord steered just fine, and we fretted that power assist would cost the car its feel—but we didn’t understand Honda’s true genius.

The Accord’s novel variable-assist steering system is one-finger-light at parking lot speeds and all but eliminated steering boost once the car was on the move, providing the heft and feel of the non-assisted Accord. We’d never experienced anything like it back in 1978, and frankly, in these days of numb electric power steering, it’s every bit as impressive.

The Accord’s ride is firm over small bumps and soft over the big ones, and to drivers accustomed to domestic land barges, it felt like a European sportster minus the reliability problems. Climbing into the hilly curves, I start to push the Accord a little harder. The 155-cm-wide tires don’t offer much grip, but the Accord is perfectly happy to run right up to the edge of its modest limits. It doesn’t feel sloppy, and it never does anything unexpected—it just goes where you point it before giving in to gentle, slow-onset understeer. Like the engine, the chassis is happiest when you run it hard.

At the top of the hill, I pause to give myself and the Honda a rest. Due diligences dictates that I take in all the thoughtful touches pioneered by Honda, things we taken for granted today but were novel to American drivers in the Carter era. The instrument panel shows a top-down view of the car with red lights that warn of open doors and trunk. Mechanical maintenance minders turn from green to red when it’s time to change the oil and the filter and rotate the tires. There’s a coin-holder, a very useful bit of kit for the toll-both-laden East Coast. (Said George Carlin in 1988, “You can’t back out of your driveway in New Jersey without some schmuck in a hat wants 50 cents. “) There are demister vents that blow hot air at the corner of your side windows so you can see your mirrors. And just as MotorTrend in 1978 was awash in cigarette ads, the ’78 Accord boasts ashtrays galore.

It’s time to take the Accord back home to Honda. (The odometer turned 50,000 miles literally right in front of Honda’s headquarters—how perfect is that?) As I zoom back out into traffic, the whole experience gels, and I see the true meaning of the first-generation Accord. I am not merely driving a car; I am reliving history. I am experiencing the sights, sounds, and sensations that completely changed what Americans expected from their cars.

What the oil crises started, the Honda Accord finished. For the first time, the car that Americans really wanted came from distant shores. Slow as it may be, the rev-happy Accord blew the domestics’ doors off and redefined their entire business model into a decades-long game of catch-up.

Such automotive history needs to be preserved, to be experienced, to be cared for—but not to be driven gently. To really experience the industry-changing nature of the original Honda Accord, you need to drive it like you hate it.