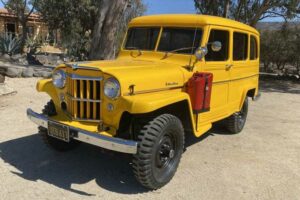 Why daily-drive a newer late-model Toyota Prius when for the same money you can have a fully restomodded Willys Wagon? Exactly—you shouldn’t! For the purposes of this article and this article only, we punched in a search to see what you’d expect to pay for a soul-sucking 2017-or-newer Toyota Prius and found they seem to range anywhere from the low $15,000 range all the way up to $34,000. For that money you get a plasticky enjoyment-deprivation chamber that, although miserly with fuel, delivers little in the way of fulfillment. So we say, why choose a Prius when for just a tick under this seller’s $20,000 asking price you can purchase a nicely restored and upgraded 1957 Willys Wagon? We found this one being offered by a seller in Ensenada, Mexico, on the San Diego regional section of Craigslist. Yes, people still sell stuff on Craigslist … seriously.

Ah, the 1950s, when metal was plentiful and plastic was a rarity. The interior of this 1957 features a lot of the former and very little of the latter, with a full steel dash housing the standard complement of gauges for its day.

Above the factory steering column and huge factory Willys two-spoke steering wheel that looks to be in fantastic condition sits a half-sweep, vintage-looking tachometer and a Motorola radio, probably from the early 1970s.

The front seating would have originally been a 60-40 split bench seat, which isn’t what’s in there now. The center portion, with flip-up armrest that turns into a backrest for a potential middle passenger, reminds us very much of the design of a Wagoneer or Cherokee Chief front bench. Whatever the case, it’s recovered in diamond-panel vinyl and looks well done. The rear seats look like factory units and have been given a similar reupholstery treatment. The interior roof and sides are treated to some custom paneling that looks the part without going into the realm of hokey, and we’ve always loved the hardwood floorboard strips on the interior of these old Willys Wagons, which allow big items to be slid inside without scratching or denting the vulnerable sheetmetal floor.

All of the glass looks like it’s been replaced, with none of the checking or delamination that’s somewhat common for side and windshield glass of this era. The factory split clamshell tailgate looks to be in good working condition as well.

The ad claims that, aside from a swapped-in 327ci Chevy V-8, the drivetrain is original and in good working condition, and a cursory look-through of the seller’s images provides no reason to doubt that. Who knows what the engine really came out of, but the ram’s-horn exhaust manifolds and short water pump tip off its being from a late 1960s car. Before the 350 was introduced the 327 was GM’s workhorse engine, put into virtually every auto the company offered that a V-8 could fit into. We like the addition of the Edelbrock Air Gap intake manifold, which helps protect the intake runners from unwanted engine heat, boosting performance a bit and helping keep detonation in check. The Edelbrock valve covers are a nice aesthetic upgrade and we’re guessing a Holley carb lies under the Holley open-element air filter. While the radiator is stock, the heater box on the passenger-side of the firewall is not, and we’re betting the blower motor and heater core housed within work worlds better than any auxiliary offering from 1957.

Backing the 327 V-8 is most probably the factory T-90 three-speed manual transmission and Spicer 18 T-case. Both are up to the task of handling a moderate amount of V-8 power, as long as you don’t try to bang-shift at max rpm or feed either a steady diet of 500 hp soup. Since the 327 is probably pumping out, by our guess, 250-ish horsepower, we’re betting both will be around for a long time to come. Given that the Spicer 18 can accept an aftermarket auxiliary overdrive, making this Wagon haul at modern freeway speeds should be simple, too.

Keeping up with modern freeway traffic with a V-8 and overdrive is one thing, but stopping in a hurry from 75 mph is another. The factory Dana 25 front and Dana 44 rear axles look fairly stock. If the original engine was the 134-cube F-head the axles should hold 5.38 gears, but if this Wagon came with a six-cylinder the gears could be either 4.88 or 5.38. Either way, we’re betting they’re still wearing their factory drum brakes. When adjusted properly, these do an admirable job of hauling a Jeep with stock tires down from speed, but if you’re the type who likes to tailgate or play lookie-loo out the side windows, a bolt-on disc brake upgrade may prove a worthwhile investment when you’re daily driving this thing.

There’s no getting around the fact that the paint is yellow. Really yellow! To the untrained eye it looks like a nice paintjob, which it no doubt is, and if you take a closer look at the rear wheel openings you’ll notice some custom body work as well. The factory rear wheel openings would not be as flared out as these, which we’re guessing was an addition made when the body was being prepped for paint. We think we can spot some welds at the upper seam, which may mean the flares are actually steel rather than fiberglass that’s been grafted in. Either way, they’re tastefully done and don’t detract in a significant way from the vehicle’s otherwise factory-looking exterior.

Having something like this as your daily driver simply brings a level of cheer and enjoyment to your world, and not just because the color is so uplifting. With a modern vehicle you leave the key fob in your pocket, push a button to start the engine, turn on the A/C and radio to drown the outside world, and plod forth in sterilized numbness. With something like this you slide the key into the dash-mounted tumblers, fire up a roaring V-8, roll the front windows down and lift open the rear tailgate glass to provide a fresh flow of outside air, and live life. Don’t drive a coffin, drive something that makes you feel alive. You’ll have enough time in one of those when you’re dead.

Pat Soffe takes us on a tour of the sick Willys pickup, workstations, and gear inside his shop. Then check out what Soffe brought to Ultimate Adventure 2021.