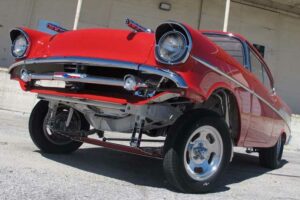 Ok, so you’ve decided you want to get into hot rodding, but you’re on a tight budget and you don’t have the patience for a two-year build. Or maybe you’re too busy working, and being worked over, by life to spin wrenches in the garage to build your dream ride. Well, contrary to what the internet trolls say, there’s no shame in buying a done, or mostly done, hot rod to enjoy and tweak to your vision.

One way to make this happen quickly is an auction. Sure, some cars get swept up in bidding wars and go for crazy money, but most cars at auctions sell for less than it would cost to duplicate them, and sometimes far less. At HOT ROD we love gassers and have always wanted one, so when we saw this red 1957 Chevy Bel Air Gasser come up at the 2022 Mecum Kissimmee Florida auction (Lot W283) it got our attention and we realized it was a great way for some hot rodder to get instant gratification.

This ride is owned by Joe Whitaker, owner of Read Deal Steel in Sanford, Florida, where they craft reproduction Tri-Five bodies (and other makes) for those that want to build a car but can’t find a rust-free starting point. Joe had been lusting for a red 1957 Chevy since he spied one in Super Chevy magazine back in 1979.

Related: MotorTrend+ is the exclusive streaming home for Mecum Auctions! Sign up for a free trial today to catch all the action, plus the best automotive shows anywhere!

As part of his business, he bought four Tri-Fives from New York for product development work, but eventually one ’57 from the group really wasn’t needed and just sat in the corner. Well, Joe decided this would be the perfect car to build into his version of that red gasser he’d spied in Super Chevy decades ago. Turns out it had some bottom-end rust, but, given his business, that was an easy fix. Stacks of cash and many months later, Joe had his dream gasser.

We asked Joe why he decided to part with his ’57 and he told us, “Why sell a car that I have always wanted and considered my ‘dream car’? Many people I know don’t sell anything, some of them seem to have their first pair of shoelaces. I’ve never been that way about anything, even cars. The joy I get from my old cars is the search, the research, the build, the finish, and then I enjoy it for a few months or a year. After that it’s time for another project! I’m currently working on an LS-powered ’57 Chevy Cameo truck and I just purchased a ’55 Chevy two-door sedan project. This means I need more room in my garage and more cash in my wallet! Selling it at the Mecum auction seemed like the lowest-hassle way to go.”

As for the Chevy, it checks off all the right boxes. It was built to cruise and look great doing it, so it fields a Laws Racing-built 1957 high-compression 283 V-8 with 327 heads, backed by 1967-dated M20 four-speed transmission that feeds power back to a period-correct 1957 Pontiac rear. Overall, the car just looks ‘right,’ as if it was ripped from the pages of an old 1960s issue of HOT ROD. We especially dig the faux machine guns jutting out from the hood. The car just oozes coolness and if you’re looking to cruise a gasser around your neighborhood next week then this is probably the quickest way to make it happen. Next week? Yep—this 1957 gasser is going across the auction block on Wednesday January 11th. So if it flips all your switches the way that magazine car did for Joe back in ’79 then you might want to consider getting a bidder card. And even if you miss this one, remember that auction cars can be a good way to score a deal and get cruising in time for spring.