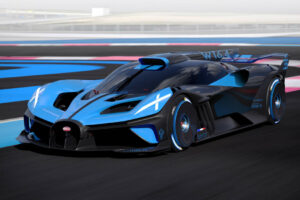 Last year, Bugatti unveiled the Bolide experimental hypercar concept. A project designed to investigate just how fast the brand’s 8.0-litre W16 engine could propel a car shorn of the luxuries in the Chiron – and now Bugatti has confirmed that the Bolide will go into production in limited numbers.

For the Bolide Bugatti developed an all-new lightweight carbon fibre body and liberated 1,825bhp from the engine with bigger turbochargers and remapping to account for higher-octane fuel. The result was a claimed 0-311mph time of just 20 seconds.

Now, as part of its Monterey Car Week announcement, Bugatti has said that it will build 40 production-spec Bolide models. Currently, the hypercar is being pushed through the final stages of its development programme, but Bugatti aims to commence deliveries in 2024. Prices will start from €4 million (around £3.3 million).

While the limited-run Bolide looks almost identical to the concept, there have been some major mechanical revisions underneath. Bugatti has reined in the concept’s colossal power output, capping it at the same 1,578bhp as the Chiron Super Sport.

The company cites fuel availability as the main reason. The Bolide concept was designed to run on 110 octane racing fuel but, for reasons of practicality, the production model will run on regular 98 octane super unleaded, which can be bought from many petrol stations worldwide.

However, Bugatti has still made plenty of modifications to the engine to make sure it can stand up to the punishment of a racetrack. The cooling system has been overhauled, while the intake and exhaust systems have been tweaked to improve response.

The production model will also be a little heavier than the concept. Bugatti says it’ll weigh 1,450kg, which is half a tonne less than the Chiron, but around 100kg more than the Bolide prototype. The result is a power-to-weight ratio of 1,088bhp per tonne.

Bugatti’s engineers have been working hard to make the Bolide meet international FIA safety standards, which required a host of new components. As a result, the seat is now compatible with a HANS device and there’s an automatic fire extinguisher plumbed into the cabin.

We haven’t seen the production-ready Bolide’s interior but, like the concept, we expect it’ll be a race-ready affair, with heavily bolstered bucket seats, a minimalist dashboard and a trimmed-down race-style steering wheel.

Bugatti hasn’t yet disclosed how much downforce the production-spec Bolide will generate. For now, all the brand has revealed is that the bodywork has been designed with “maximum downforce in mind.”

The brand’s engineers have also made a few tweaks to the shape of the hypercar’s key aerodynamic parts. The front bumper has gained a pair of new winglets, while the V-shaped spoiler on the concept has been swapped for a flat replacement. The stabilising fin over the engine cover has remained, though.

The Bolide concept’s front splitter can generate up to 800kg of downforce at 200mph – all on its own. The massive wing adds another 1,800kg.