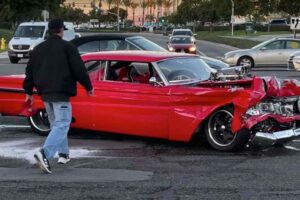 Twenty-three years, over 200 grand, and two wives – these were the costs of restoring and modifying this 1,300-horsepower Mercury Comet. It was all well and good for YouTuber AutotopiaLA as they feature the car. However, the situation turned sour at the point where they have to drive the car on the road.

Just a bit of a warning, though – the video was a bit graphic but we think we can learn a thing or two from this encounter.

First, let’s discuss the car. It’s a 1964 Mercury Comet restoration and modification project, powered by a 632 Merlin big block Chevy V8 engine with a 1471 BDS supercharger, for a total output of 1,300 hp. The kicker, however, was that the brakes were done 17 years ago. Stover recognized this and said that he should have probably put a bigger set of brakes on the car. We agree.

The presenter and Stover went on to drive the Comet for the rolling shots. They decided to not use the harness and just use the lap belts since they will just be cruising for the shots. However, Stover then mentioned that he was riding the brakes since the accelerator was sticking to 2,200 rpm and had an idle surge. The presenter even smelled the brakes at one point.

Then, the harrowing accident happened. The Comet lost its braking power, crashed on a minivan, and grazed another car – both the other cars innocently waiting at a stoplight. The presenter smashed his face on the metal dashboard while the owner suffered arm injuries as he straightened his arms to brace for impact.

There are things that we (and Stover) should take away from this incident. When there are seat belts or harnesses, use them; there were good reasons they were invented. Next, never neglect the brakes. The fact that the car made over 1,000 hp meant that it needed an equally powerful stopping force, which wasn’t accomplished for this car. Both lessons should be charged to safety, and this video should serve as proof of that.

We’re sure the owner of the car and the presenter are both okay at this point, but we sure do hope the occupants of the other cars were also okay and got compensated for the damages. There wasn’t any mention of them on the video (if there were, we missed it and that says something).