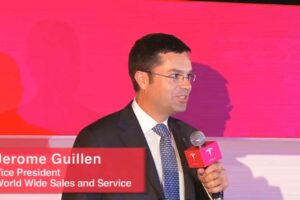 Will this have any impact on the Tesla Semi?

In what many are calling an unexpected move, Tesla’s President of Heavy Duty Trucking – and one of CEO Elon Musk’s top executives – left Tesla last week, on June 3, 2021, which was ironically the original date of the Model S Plaid delivery event.

Tesla has had top executives leave in the past, and it’s not necessarily uncommon in the business world, but Guillen’s sudden departure still comes as a surprise. According to Bloomberg, New Street Research Analyst Pierre Ferragu shared in an email:

“That is a huge and unexpected loss. Jerome’s contribution to Tesla will remain part of the company and the company will continue to attract other top-guns.”

Guillen had been with Tesla for 10 years, and is one of just a handful of the more well-known Tesla employees over the years. One of Musk’s other key players, JB Straubel move to an advisory role at Tesla in 2019, essentially departing after 15 years. Chief Financial Officer Deepak Ahuja left Tesla for the second time in early 2019, and Jon McNeil, former president of global sales and services, left Tesla to move to Lyft in 2018.

Guillen’s departure from Tesla was revealed via a regulatory filing with the SEC. It reads as follows, via Electrek:

“As of June 3, 2021, Jerome Guillen, President, Tesla Heavy Trucking, of Tesla, Inc. (“Tesla”), departed Tesla. We thank him for his many contributions and wish him well in his future career.”

Guillen had a major part in helping to ramp up Model 3 production in 2018. Prior to becoming the heavy-duty trucking chief, he was Tesla’s President of Automotive. Before that, Guillen held the roles of VP of Trucks and Programs, as well as VP of Tesla Worldwide Sales and Service. He got his start at Tesla as the Model S Program Director back in November 2010.

Guillen is currently only 48 years old. At this time, there are no details as to what his plans are, or where he might be headed next. His LinkedIn page hasn’t yet been updated.

Perhaps Tesla fans’ biggest concern is the fate of the Tesla Semi, which was unveiled back in 2017. Like many of Tesla’s future projects, it has been delayed. Guillen was the primary person responsible for the all-electric hauler, so we’ll have to wait and see how Tesla plans to move forward.