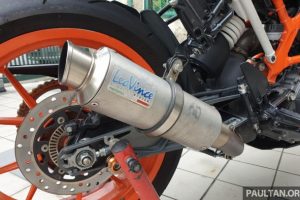 Illegally modified motorcycle exhausts, or the eradication thereof, should be a collective effort by all relevant Malaysian agencies, says Transport Minister Datuk Seri Wee Ka Siong. Speaking during the launch of the Diesel Multiple Unit train at Pasir Was, Kelantan, Wee said the import and sale of illegally modified motorcycles and components needed to be addressed, as reported in The Star.

“Some say loud exhausts should be banned but it may not come under the Transport Ministry’s jurisdiction as it could involve the Customs Department and such,” said Wee, responding to social media posts accusing several ministries of allowing the sale of modified motorcycle parts. “Some people questioned how these exhausts entered the market and accused the Domestic Trade and Consumer Affairs Ministry of not stopping the sale of such prohibited items,” he said.

Saying that the sale of modified parts for vehicle use does not fall under the jurisdiction of the Transport Ministry, Wee suggested the relevant ministries collaborate on finding a solution. “We don’t want to trouble the people but there are complaints that the loud sound from these exhausts is causing some to lose sleep,” said Wee. Wee emphasised the Ministry of Transport is taking an advocacy approach to the issue of noisy motorcycles, with offenders being called up for interviews by JPJ under Article 114 of the Road Transport Act, instead of being issued a summons. Those found guilty of modifying their motorcycle exhaust face a maximum fine of RM2,000 or six months’ jail, with seizure of the non-compliant motorcycle an option under Section 64 of the Road Transport Act 1987.

The issue of motorcycle exhaust noise came to the fore around mid-February this year, after police and JPJ took what was felt by some in the riding community to be excessive action. Riders were subject to roadblocks and checks, leading to allegations from the public a minority segment of the vehicle population in Malaysia was being unfairly targeted and persecuted.