Home » Malaysian police: Use the motorcycle lanes or else – paultan.org

Malaysian police: Use the motorcycle lanes or else – paultan.org 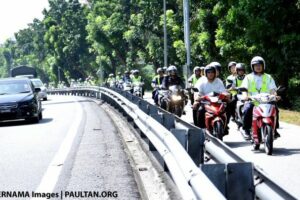 Lamenting the fact that many motorcyclists still fail to use the lanes provided, ACP Mohamad Fakhruddin Adbul Hamid, Petaling district police chief, said failing to use the lanes is dangerous to both the riders and other road users. He also noted that many motorcyclists are using toll entries and exits as short cuts to avoid using the motorcycle lane bypass around the toll plaza.

Commenting on incidents at police road blocks set up during the Covid-19 Movement Control Order, Fakhruddin said four accidents were recorded on the Federal Highway. These accidents were the result of driving under the influence of alcohol, reckless driving and failure to pay attention to traffic, resulting in damage to police equipment at the road block.