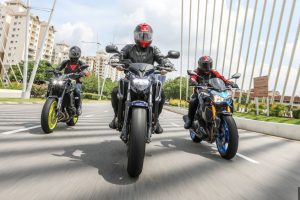 In an effort to save lives of motorcycle riders and pillion passengers across the nation, a call has gone out for segregated motorcycle lanes to be built. This was said by social activist and Alliance for a Safe Community chairman Tan Sri Lee Lam Thye in a press statement, appealing for the government to build such lanes on grounds of safety.

Praising the recent amendment to the law imposing heavier penalties on those convicted of drunk driving resulting in an accident, he lamented that no attention was paid to the issue of road safety, especially concerning motorcyclists. “This proposal concerns the safety of motorcyclists, the most vulnerable category of road users to crashes, particularly fatal ones that have claimed thousands of lives of Malaysians and mostly in the youth age group,” Lee said. In his proposal, Lee called upon the government to include construction of such motorcycle lanes especially on highways and city streets as part of the 12th Malaysia Plan, scheduled for next year. “The best example of such live-saving lanes is certainly along both flanks of the Federal Highway stretching from Petaling Jaya to Shah Alam and up to Klang,” said Lee.

“The Federal Highway is, without doubt, one of the busiest with traffic virtually round-the-clock but according to statistics, an average of only two fatal crashes involving motorcycles has been recorded annually,” Lee continued. Lee also called for motorcycles to be speed limited saying, “a law has to be enacted to reduce the speed limit of motorcycles from the existing motorcycling culture where riders are by and large speeding at their whim and fancy and with impunity.” Lee also called upon the Transport Ministry and police to restrict motorcyclists to the left lane of highways and roads, demarcating a lane for their use with double white lines. “In this way, the two-wheelers are barred from riding on the fast lanes competing for space with the bigger vehicles, which is obviously the main cause for the horrific high death tolls among motorcyclists and pillion riders,” Lee elaborated, adding this approach should lead to fully segregated lanes for motorcycles.

“The Alliance for a Safe Community views these measures as highly doable, practical and above all, are not rocket science without the necessity of further research into its pros and cons. It is pure common sense,” said Lee. Noting the increase in the number of motorcyclists, Lee said it is all the more imperative the government implements this programme.