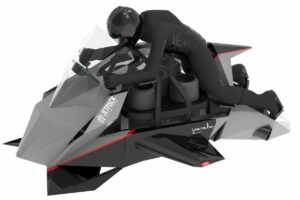 While the world is quite a long way away from speeder bikes like those seen in the “Star Wars” movies, US firm Jetpack Aviation (JPA) has successfully hover tested the Speeder flying motorcycle. Still in development and flight testing, with first full flights expected later in the year, the Speeder called for JPA to develop a new type of flight control software.

JPA’s system does not use rapidly varying thrust unlike the drones we are used to for camera and video work. Instead, the Speeder prototype uses what JPA calls “Jetovators”, servo-controlled nozzles that vector thrust 360 degrees, similar to the system used in the British Aerospace Harrier and McDonnell Douglas AV-8B V/STOL military aircraft.

A completely new flight control software had to be developed for the Speeder, and features the ability to hold itself in a stable hover using LiDAR. JPA aims to have the final version of the Speeder simple enough to operate as to not require a pilot’s license, with control and operation simplified to the level of a motorcycle. JPA plans several versions of the Speeder, including both civilian and military variants, as well as a pilotless cargo version that is tipped to do well over 480 km/h. In its current prototype configuration, the Speeder uses four jet engines located at each corner of the airframe, rotating on gimbals.

Testing has proven the Speeder can take off and climb vertically, do turns and hold a stable hover. The final form of the Speeder has yet to be decided, including pilot accommodation and wing configuration for level flight, but it is envisioned there will be twin engines at each corner of the Speeder.

Preliminary specifications for the Speeder include an unladen weight of 104 kg and a maximum thrust of 750 kg, enough to propel the flying motorcycle to speeds well above 250 km/h with a flight time of between 10 and 22 minutes. The Speeder is multi-file capable, utilising kerosene, Jet-A or diesel, and preorders are being taken for a provisional price of USD 380,000 (RM1.6 million).