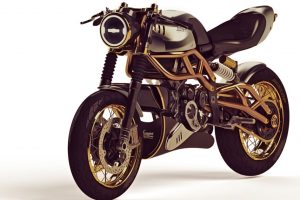 Speak to a rider over a certain age, and they’ll probably get all misty-eyed at the mere mention of two-stroke. Making a lot more power for their size than the equivalent four-stroke, two-stroke engines were once a huge deal in the motorbike world, but emissions rules mean they’re not really a thing anymore.

Some are trying to change that, however. One such party is Langen Motorcycles, a British company busy preparing a brand new 250 two-stroke sports bike. That’s the two-wheeled equivalent of someone building an all-new, ultra-lightweight sports car with an N/A six-cylinder and a manual gearbox. A tasty prospect, in other words.

The bike will use a 90-degree V-twin with a counter-rotating crankshaft from Italian firm Vins, producing 80bhp 11,800rpm. A healthy output, considering that the 250 – which features carbon fibre panels on an aluminium frame – weighs just 112kg.

At the front you’ll find 43mm Ohlins forks, while at the back – shirking the de rigueur monoshock setup – is a pair of Ktech Razor dampers with piggyback reservoirs.

Designed to evoke the classic cafe racer style in a contemporary fashion, the bike includes real 24-carat gold details and naked carbon on display. Each one will be slightly different, however, with a big emphasis placed on customer choice. “During the design and build of the motorcycle each new owner will have an input over the final design, ergonomics, geometry to truly create a unique machine,” Langen says.

It isn’t going to be cheap, then. Pricing hasn’t been confirmed, but Motorcycle News is reporting that it’ll be around £30,000 when launched this summer. However, We suspect a lot of OG 250 two-stroke fans will consider that a small price to pay for reliving the smoky glory days in a modern setting.