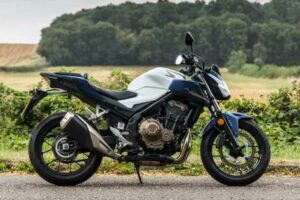 I passed my motorbike test over ten years ago, but that ‘A’ category entitlement on the back of my license photo card hasn’t exactly been well used. I quickly bought a motorcycle (a Yamaha TRX) after completing my ‘Mod 2’, used it quite a bit for nine months, and then fell off it due to rider error. Oops.

I repaired the bike, replaced damaged safety gear and got back in the saddle a few weeks later, but it felt different. I wasn’t enjoying it as much I had before. After riding sporadically for the next year, I sold the bike (for a fraction of what these sought-after modern classics go for now, of course), put all my bike garb in a box, and told myself I’d revisit the two-wheeled world in the future.

For years, though, I didn’t. I’d flirt with the idea and put it off, and after the best part of the decade, it was looking like my brief stint in motorcycles was nothing more than a failed experiment. My fascination with the things remained, though, and last month, I decided it was high time I had another go.

Despite my complete lack of riding for an extended period, Honda was happy to loan me a CB500F press bike, which I’ve clocked just under 200 miles on. Thus far, it’s been brilliant. Here’s what the experience has taught me.

Some things came back straight away, others don't

Eight years is a hell of a long time. I wasn’t convinced that my second go with motorcycles would be, well, ‘like riding a bike’. I wondered if it’ll feel like I’d never tried a motorcycle before, and sure enough, my first ride did feel pretty alien to begin with. The bike felt heavy and unwieldy as I slowly made my way around the local housing estate.

However, to my surprise, the first time I went to change gear, I did so quickly and efficiently without even thinking about the process. Score one for the long-lasting joys of muscle memory!

As the speeds rose, I started countersteering, again without really thinking about it. While it was clear my low-speed manoeuvring needed a lot of work, it was nice that some elements of riding still seemed natural.

Everything feels incredibly fast at first

There’s a 40mph road going down the back of the estate I live on, but on my first ride, getting the CB500F up to this speed limit felt more akin to hitting 170mph on Silverstone’s Hangar Straight in a supercar. On a naked bike with my gangly body providing plenty of wind resistance, slowly nudging 40mph felt hugely fast and a little terrifying.

The sensation of speed and acceleration is completely different when you’re so exposed. Everything over 30mph felt awfully quick, and although this did start to fade, I still don’t often find myself at full throttle despite the CB’s modest power output.

The bike should be carefully considered

Simplicity is the aim of the game. Jumping straight on a superbike like a Ducati Panigale V4 with an aggressive riding position, over 200bhp and load of pricey components after so long away would have been stupid. Particularly for someone like me, since I wasn’t a particularly brilliant rider before that gap.

The Honda CB500F and other entry-level big bikes are pretty much the exact opposite of this. The Honda has an unintimidating (and A2 license-friendly) 47bhp parallel twin, a relaxed riding position, and as a ‘naked’ bike, no fancy fairings to damage if – heaven forbid – you drop it. The CB is just a bike, and that’s perfect for me for the time being.

It also has ABS plus a slip and assist clutch which reduces the chance of the rear wheel locking up during high-RPM downshifts. Finally, there’s a clear to read LCD screen giving plenty of information, in stark contrast to my old Yamaha, which didn’t even have a fuel gauge.

But training is more important

Even more important than bike choice is getting some training. My first ride was only a five-mile biff around the local area to get used to the controls and the feel of the bike, and I left it at that, knowing I had a one-to-one refresher course booked the next day with a Shires Motorcycle Training.

A lovely chap also called Matt turned up the next morning with a high-vis vest and a helmet with an embedded intercom, and off we rode on a mix of residential streets, dual carriageways and winding country roads.

Under Matt’s instruction, the difference between my riding at the beginning of the day and the end was colossal. It boosted my confidence massively. Plus, knowing that a qualified instructor had deemed me to be safe and in control was incredibly reassuring.

I need to loosen up

On that training day, I clocked around 110 miles during five hours of riding. And good God did it hurt when I got off, and even more so the next day. As is common for new riders, which I effectively am at this point, I tense up when on a motorcycle.

In time, as my confidence grows further, I’ll hopefully be able to banish my rigid back and handlebar death grip. Doing so won’t just cause me less pain, it’ll also make me a much smoother rider.

I should have done this years ago

The biggest takeaway? I’m in love with riding again. The sense of freedom, the feeling of being at one with the machine (no car can quite replicate this), the camaraderie in the bike community, the joy of going out for a ride with a mate and stopping for unhealthy food – it’s all brilliant.

See also: The Real Cost Of Being A Motorcyclist: A Complete Guide

I should have done this a long time ago. Perhaps if I’d arranged the kind of one-on-one training I’ve had with Matt when I was struggling for confidence back in 2013, I wouldn’t have quit. But as the adage goes, better late than never.