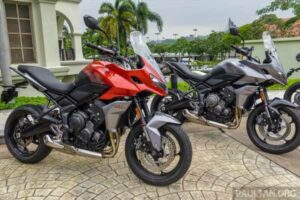 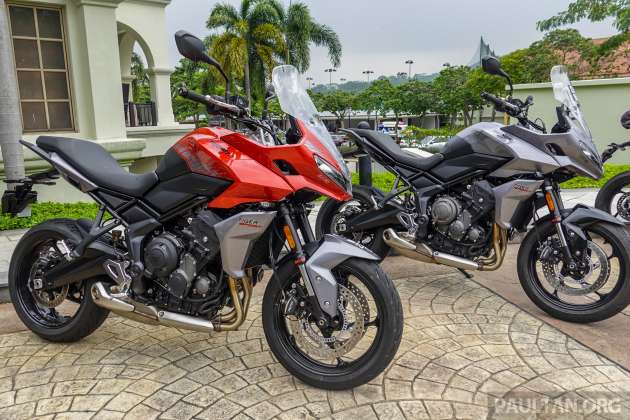 During the media launch of the Triumph Tiger 1200 GT Pro and Rally Explorer, the 2022 Triumph Tiger Sport 660 adventure-tourer was also on display, with pricing from RM49,900. On sale in Malaysia since last February, the Tiger Sport 660 comes in Lucerne Blue, Sapphire Black dan Graphite/Black, while the Red and Graphite colour variant retails at RM50,900, not including road tax, insurance and registration.

The TFT-LCD instrument panel is specific to the Tiger Sport 660, with connectivity to the MY Triumph app via Bluetooth as a an optional accessory. This gives the rider connection to a smartphone and GoPro camera, with specific functions for both able to controlled via the handlebar switch pod.

Standard on the Tiger Sport 660 are two ride modes – Road and Rain – along with two-channel ABS and switchable traction control for off-road duty. Braking is done by Nissin, twin two-piston callipers clamping 320 mm discs on the front wheel and 255 disc with single-piston calliper at the back while wheel sizing is 17-inches front and rear, shod with Michelin Road 5 tyres in 120/70 and 180/55 sizes.