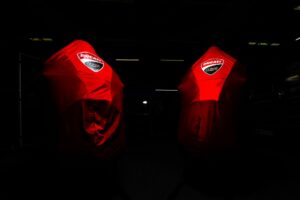 Expanding the Ducati Corse stable in MotoGP from 2022 is the new Aramco Racing Team VR46, after the signing of a three-year team agreement from 2022 to 2024. In conjunction with the sponsorship agreement, VR46 Academy has also entered into a five-year competition agreement with Dorna Sports to race in MotoGP.

Helming the new Ducati team is Pablo Nieto, who currently manages Sky Racing Team VR46 in the Moto2 and Moto3 classes. Nieto will be able to draw upon riding talents developed by the VR46 Riders Academy in Tavullia, and use the resources of the VR46 Moto2 and Moto3 teams.

With the formation of the new MotoGP team, Ducati Corse will have three teams and six riders competing in the championship. The 2021 lineup consists of the official factory team, Ducati Lenovo Racing with Jack Miller and Francesco Bagnaia, and satellite team Pramac Racing with Johann Zarco and Jorge Martin. The VR46 Riders Academy is the brain child of Valentino Rossi, who currently competes with Petronas Yamaha Sepang Racing Team riding a Yamaha YZR-M1. The academy identifies and trains young racing talent from around the world, with Malaysian alumni of the academy including Kasma Daniel Kasmayudi and Muhammad Akid Aziz.

Rossi, now aged 42, is in the final year of his racing contract with Yamaha and owns Sky Racing Team by VR46. Rossi’s half-brother Luca Marini currently competes with Sky VR46 Esponsorama, where he finished runner-up in the 2020 Moto 2 World Championship.

Sky Racing Team by VR46 entered Moto 3 in 2014, adding a Moto 2 team in 2017. Speculation is rife that Rossi, pending his retirement from competition, will continue to be involved in MotoGP as a team principal.