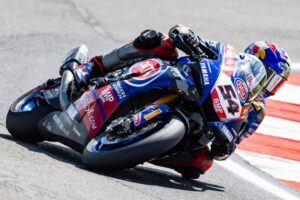 In damp but drying conditions at Donington Park, UK, Toprak Razgatl?o?lu of Pata Yamaha, starting from the fifth row on the grid in 13th place, overtook World Superbike Championship (WSBK) leader Jonathan Rea of Kawasaki Racing Team to win Race 1. Despite his fifth row start, Razgatl?o?lu was right behind Rea after eight corners and as the pack came in for lap 2, was in front.

However, surprise showing for the first race of the two-race weekend was the BMW Motorrad Team, with riders Tom Sykes and Michael Van Der Mark in the saddle. Sykes came in fourth, 14.625 seconds behind, while Van Der Mark settled for fifth place, 1.822 seconds behind his team mate and 16.447 seconds behind Razgatl?o?lu. This meant, after his Race 1 victory, Razgatl?o?lu had cut the championship standing points gap to 15 points behind Rea. Not conceding an inch, Rea stamped his authority with a start-to-finish win in the 10-lap Superpole Race, increasing his points lead to 23 points ahead of Razgatl?o?lu who came in sixth.

At the start of Race 2, track conditions were dry despite a downpour just before the Superpole race, with Razgatl?o?lu starting from sixth position on the grid from the results of his Superpole finishing position. Rea put up a fight despite Razgatl?o?lu being in the lead, wresting back first place on lap 10 at Coppice corner.

Unfortunately, Rea crashed out of Race 2 a lap later, at the very same corner where he took the lead from Razgatl?o?lu. Despite remounting, Rea could only manage to rejoin the race in 23rd place, which was also his finishing position. Razgatl?o?lu finished the race in a time of 34’01.226 with Garrett Gerloff of GRT Yamaha came in second 2.243 seconds behind. In third was Sykes, riding his BMW Motorrad M1000RR 4.522 seconds behind the leader.

Rea, six-time consecutive WSBK championship winner with Kawasaki Racing Team from 2015 to 2020, now sits at second in the championship with 181 points. At the top of the table is Razgatl?o?lu with a very narrow 183 point lead, while Scott Redding of Aruba.IT Racing Ducati is a distant third with 117 points.