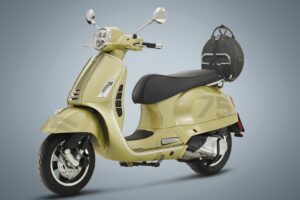 Available only for the 2021 model year, the Vespa 75th Anniversary comes in a special “Giallo 75th” paint scheme, a throwback to the early days of Vespa in post-war Italy. The anniversary paint scheme is a metallic shade of yellow, contrasted with body panels in a darker shade, and emblazoned with a “75”.

Complementing the colour scheme are wheels paint4ed in diamond finish grey along with an leather saddle in smoke grey. Chrome is used to accentuate details such as the Vespa “bow tie”, mudguard badge, instrument cluster surround, exhaust cover and rear-view mirrors while the GTS 75th Anniversary also gets chromed passenger footpegs.

A chromed rear luggage rack is fitted, coming with a Vespa round luggage bag mimicking the rear-mounted spare wheel of classic Vespas. The bag, made from nubuck leather, has a shoulder strap for carrying around as well as a waterproof cover for protection against the elements.