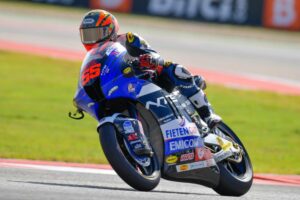 In an Instagram post, speculation is rife amongst his fans as to whether Malaysia Moto2 racer Hafizh Syahrin will be retiring from competition in the Moto2 class this year. Currently riding with NTS RW Racing GP, Hafizh initially competed with Tech 3 Racing, campaigning the YZR-M1 before team principal Herve Poncheral made a surprise move to the KTM stable after 20 years with Yamaha Factory Racing as a privateer.

Saying that he will not forget his fans and supporters, Hafizh said new things await of which he will letting his fans know soon, reported local daily Berita Harian. In 2014, his first full season in Moto2, Hafizh placed 19th in the championship with a career best of ninth in 2017. Moving up the ranks to MotoGP in 2018, Hafizh managed 16th in the premier class champions table in his rookie year, narrowly missing the Rookie of the Year prize after being bested by Franco Morbidelli. Losing his seat to Brad Binder at the end of the 2019 season, Hafizh stepped down to Moto2 with the Speed Up Aspar Team before moving to NTS RW Racing for 2021.

paultan.org has reached out to Hafizh for comment. This post will be updated should a reply be received.