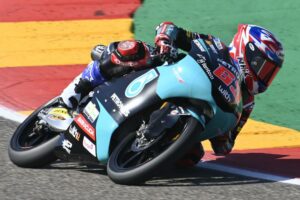 Coming in 13th in the 2021 Aragon Grand Prix, Malaysian Syarifudding Azman, better known as Damok, earned three points in the Moto3 race at Motorland Aragon. Racing under Petronas Sepang Racing Team (SRT) colours, Damok was given a ride for Moto3, replacing John McPhee who moves up to the Moto2 class in Petronas SRT.

Starting the race in 21st position, Damok made up two place in the opening two laps in his debut Moto3 race. Sitting in 18th position at the halfway point, Damok was able to slowly claw his way through the field, eventually finishing 13th while Binder, who started in pole position, was unable to hold on to his lead, eventually finished in seventh.

19-year old Damok, who hails from Selangor, competes in the 2021 FIM CEV Moto3 championship with a win in the Barcelona round last June. MotoGP stays at Aragon for a double-header with racing action taking place on the weekend of September 10-12.