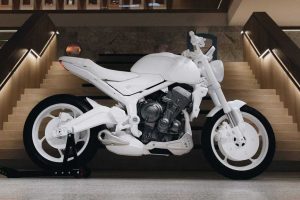 Indicating plans to move into the small displacement market are moving ahead, the covers have been taken off the Triumph Trident design prototype. The design mock-up, finished in white, shows off the general proportions and lines of the upcoming model, with which Triumph intends to enter the middleweight commuter/light sports motorcycle market.

Not as edgy as the more sports oriented 765, nor a throwback to the classic design of the Street Twin, the Trident falls somewhere in the middle ground of an all-rounder motorcycle. Meant to sit in the Triumph catalogue under the 765, it is clear Triumph intends to compete with market offerings such as the Kawasaki Z650, Yamaha MT-07 and Honda CB650R.

In theory, this would place the Trident’s market price around the RM45,000 mark, suitable for the budget-conscious rider who needs a machine a step above a 250. Perusing the press photographs, the Trident’s design has been kept simple with a new frame made from steel tube and welded stampings wrapped around the Triumph Triple.

This also applies to the asymmetrical gullwing swing arm which seems to be a welded pressed unit – cheaper and easier to manufacture – rather than the cast alloy unit on the 765. The engine is also not a downsized unit from the 765 as although there is a resemblance in the head, the engine casing are short and different in design.

The design prototype also shows upside-down forks and we will assume these might be non-adjustable units due to cost considerations. Nissan brake callipers are also shown, with what looks like two-piston units in front and a single-piston calliper at the back. Up top, the twin headlamp design from the 765 has been replaced with a single round LED headlight and inside the cockpit a single round LED display keeps things simple and a little retro looking. The fuel tank looks to be massive, with design lines throwing back to the original Triumph Trident from the 1970s.

There was little other information released, such as displacement or power figures but for this market segment, the norm seems to be around 60 to 70 horsepower. Triumph has stated the Trident will come in a detuned version for new license holders which can then be retuned to provide full power once the rider passes his or her license restriction.