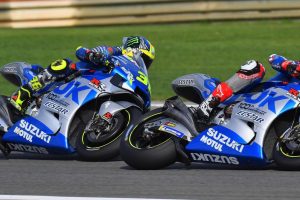 With just two races left in the pandemic shortened 2020 MotoGP season, Team Ecstar Suzuki made it an emphatic one-two victory at Circuit Ricardo Tormo in Valencia, Spain. Taking his maiden MotoGP victory, Joan Mir gained 37 point lead in the MotoGP World Championship, leaving him just having to win one of the two remaining races to clinch the title.

Following close behind to finish second was team mate Alex Rins, who was passed by Mir, then proceeded to fight off a challenge from Pol Espargaro of Red Bull KTM Factory Racing who finished third. The last time Suzuki had a one-two finish was back in the 500 cc World Championship days with a double finish by Randy Mamola and Virginio Ferrari in 1982, racing at Hockenheim, Germany.

It was a tragic for Fabio Quartaro of Petronas Yamaha Sepang Racing Team, who lowsided early in the race and putting paid to his world championship ambitions for 2020. However, team mate Frankie Morbidelli stands fifth in the MotoGP riders standings with his eleventh place finish. Making up for his unfortunate crash in Tereul two weeks ago where he started on pole, Takaaki Nakagami of LCR Honda finished in fourth place, followed by Miguel Oliveira of Red Bull KTM Tech 3 in fifth. Fan favourite Valentino Rossi of Monster Energy Yamaha Racing who was benched after testing positive for Covid-19 returned to racing for this round but crashed out.

Racing continues next weekend for the Valencia Grand Prix with Mir being the favourite to win the race and the world title with 162 points. Challenges come from Fabio Quartararo and Wins, tied with 125 points and needing to win both remaining races for a chance at the championship.