2020 MAM Speedweek starts with first round at Sepang – paultan.org 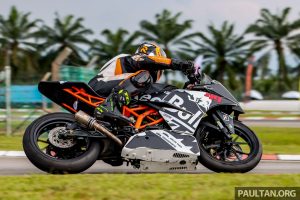 Kicking off its inaugural round for this year’s season at the Sepang Go-kart Track was the 2020 MAM Speedweek. Highlight of the day was the Sepang International Circuit (SIC) MiniGP championship, established with the aim of identifying young talent at the grassroots level, the championship is open to riders aged eight to 18.

There are two classes in the MiniGP championship, 110 and 160 which indicate the engine displacement of the MiniGP race machines. Supported by Zulfahmi Khairuddin and ZK Racing, the MiniGP bikes are prepared to spec with identical engine and tyre setups allowing for rider skill to shine through as opposed to a mechanical advantage.

Conditions were wet in the first race, with eight racers each in the 110 and 160 classes. The 110 class in race one was won by Terengganu lad Qabil Irfan, aged eight, with a time of 15:39.347 and a fastest lap of 1:01.757, followed by Danish Rahman and Adie Putra in second and third respectively.

For the 160 category, Hakim Danish took the first race with a time of 14:44.557 and a fastest lap time of 58.492. He was followed closely behind by Farres Putra in second and Farish Hafly in third.

The sun dried track for race two saw Qabil Irfan repeat his earlier success in the 110 class, with Arif Anaqi in second and Adam Danial in third. Hakim Danish and Farres Putra repeated their positions in the second race with third place going to Irfan Haykal.

For the MP150 underbone class, Muhammad Firdaus took the win with a time of 14:27.796 with a fastest lap of 57.344. Firdaus beat Arash and Shariman Yusof, who finished in second and third place. Going up to the bigger capacity motorcycles, the SB250 class saw Zulhilmi Faiz clock a fastest lap time of 56.617 in the Time Attack format with Haikal Fitri second with a lap time of 58.919 and Azizul Khairi third with 58.996.