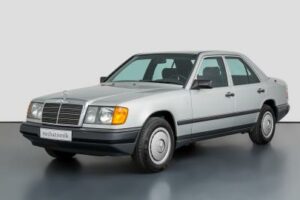 The W124 is said to be in pristine condition and unused, hence being sold as a ‘new’ car.

As per the German dealer, the almost-new W124 is said to have been a showcase vehicle at a local dealership back in 1987. A year after being in the showroom, the car was sent into storage, having remained there for nearly 33 years now. The W124 is said to be in pristine condition and unused, hence being sold as a ‘new’ car.

The 1987 Mercedes-Benz W124 230E comes finished in ‘735 Astralsilber’ paintwork. Inside, the seats are finished in grey fabric upholstery, while the centre console features wood inlays. The W124 is also said to come with features such as a sunroof, anti-lock braking system (ABS), automatic locking differential and a basic radio & audio system; among others.

The Mercedes-Benz W124 230E comes powered by a 2.3-litre in-line 4-cylinder petrol engine. It is said to produce 132 BHP and is mated to a manual transmission unit.