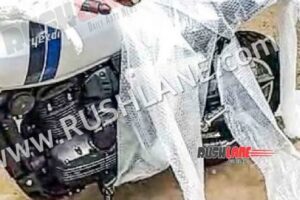 It is likely to be called the Yezdi Roadking & use the same 334cc, single-cylinder engine that powers the Jawa Perak.

The upcoming Yezdi ADV bike has been spied without any camouflage.

The spy shots reveal the white fuel tank with black and blue stripes and the Yezdi lettering on the side. The fuel tank also features a glossy steel cap and a wing-styled Yezdi logo along with the “Legendary Yezdi” engraving at the top. The engine is finished in black.

It is being said that this could be one of the few colour options of the new motorcycle that is likely to carry the Yezdi Roadking moniker. As per the media report, the new ADV could be launched on November 15, 2021, which marks Classic Legends’ 4th anniversary. It would compete with the likes of the Royal Enfield Himalayan.

Some of the expected features of the Yezdi ADV include a round LED headlamp, LED turn signals, a LED taillight, fork gaiters, metal bash plate, luggage rack, and saddle stays. The motorcycle is also said to have wire-spoke wheels fitted with dual-purpose tyres, an upswept exhaust, and a digital instrument cluster.

The Yezdi ADV is likely to use the same 334cc, single-cylinder, liquid-cooled, DOHC engine that powers the Jawa Perak in which it produces 30.22 BHP and 32.74 Nm.