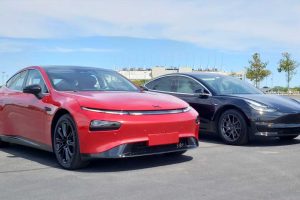 Comparing every new electric car company to Tesla is getting pretty tedious, I know. But some are more obvious in following Elon Musk’s playbook than others—and sometimes the parallel trajectories make this comparison inevitable. There are only so many paths to becoming the world’s most valuable automaker.

You probably haven’t heard of Xpeng, but as of 9:30 a.m. EST this morning, the Chinese automaker is now a publicly traded company on the New York Stock Exchange after an initial public offering that proved more popular than expected. It raised $1.5 billion in a market that’s crazy for any electric vehicle play as one of a handful of well-funded ventures from China to attract big attention from international investors.

The explosion of China’s domestic car industry in the last decade isn’t news, especially its bustling electric vehicle sector. But for American consumers and enthusiasts, with a few notable exceptions, this massive growth has all been happening in the abstract. You catch glimpses of certain cars or companies in our media, but there remains a big question: Just what are these Chinese domestic market cars like to drive, anyway? And are they any good?

Yesterday, The Drive got the rare chance to answer that question by taking a Chinese-market Xpeng P7 for a spin. The P7 is an all-electric sedan that’s been called China’s Model 3—stylish, luxurious and floating on promises of long range and Level 3 autonomy. Xpeng said it had delivered 18,700 units of the P7 to buyers in China as of July 31.

What’s important to know here is that Xpeng has no officially defined plans to sell its cars here in the United States. This is not another story about how this is going to be the first Chinese-branded car to make it in America. Instead, consider it a check-in on China’s auto industry via one of its most promising homegrown electric carmakers, aimed to strike at what’s still the world’s largest car market.

The Xpeng P7 High Performance, By the Numbers 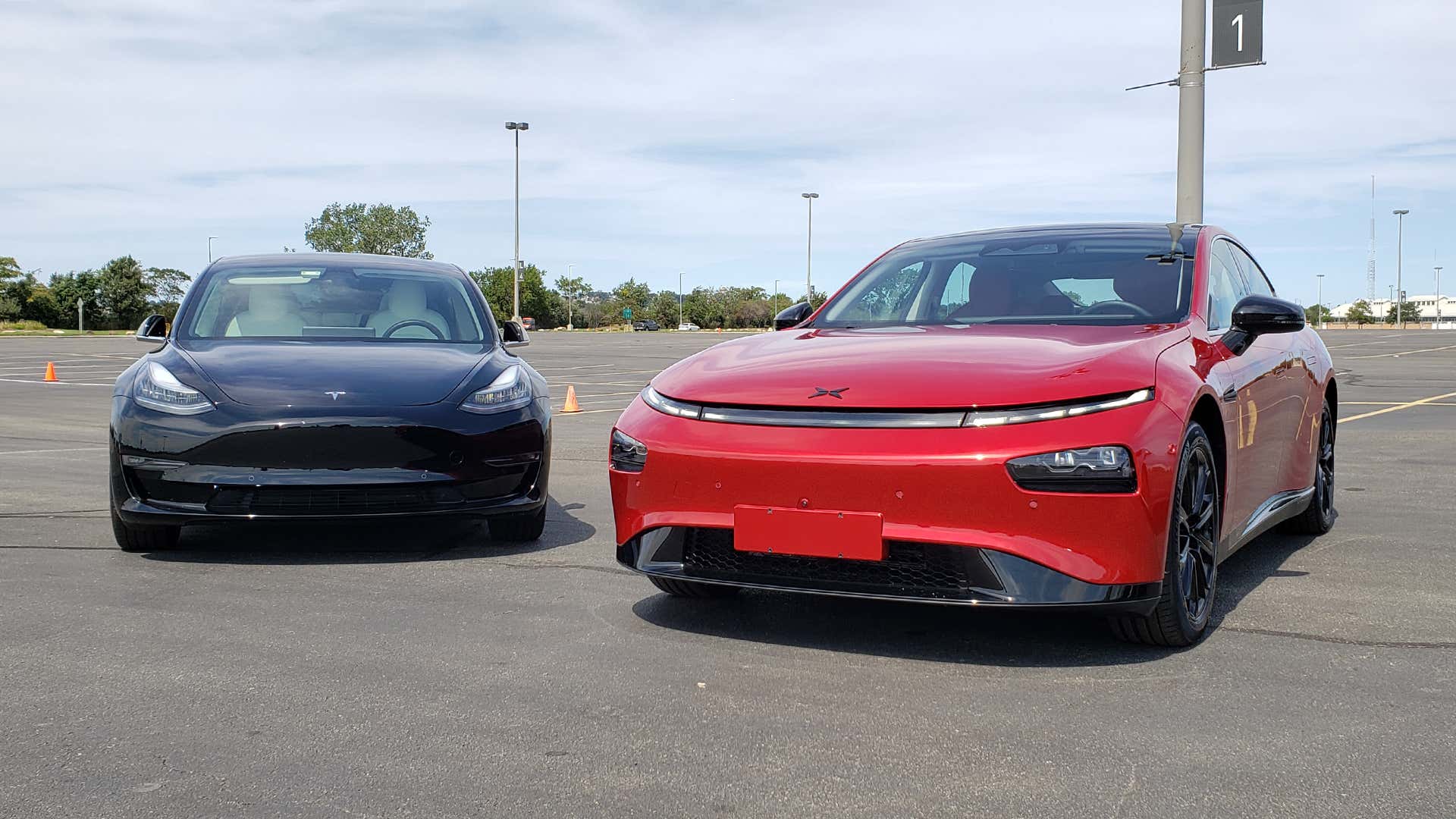 Founded only five years ago, Xpeng launched the G3 compact electric SUV in November 2018. That puts it a bit more than a decade behind Tesla, which got to its own IPO on roughly the same timeline. Xpeng’s second car is the P7 electric sedan, which went on sale in China at the end of June.

The P7 bears some considerable resemblance to the size, packaging, and features of the Tesla Model 3—the single highest-selling EV in the world. But Xpeng describes the P7 as a stylish, luxurious all-electric sedan, with an emphasis on providing comfort rather than sportiness. (By the way, Xpeng and Tesla are currently in a legal battle as well over driver-aid technology; I’ll stick to cars this time, but you can read about that lawsuit here.)

Mine was the top-of-the-line P7 High Performance, with all-wheel drive from two drive motors, powered by the largest-capacity battery. At a length of 192 inches with a 118-inch wheelbase, the P7 is seven inches longer than the Model 3, with five inches of extra wheelbase. Its black-glass roof, frameless windows, retracting door handles, exterior-mounted surround vision cameras, and other touches also echo those of the Tesla Model 3. 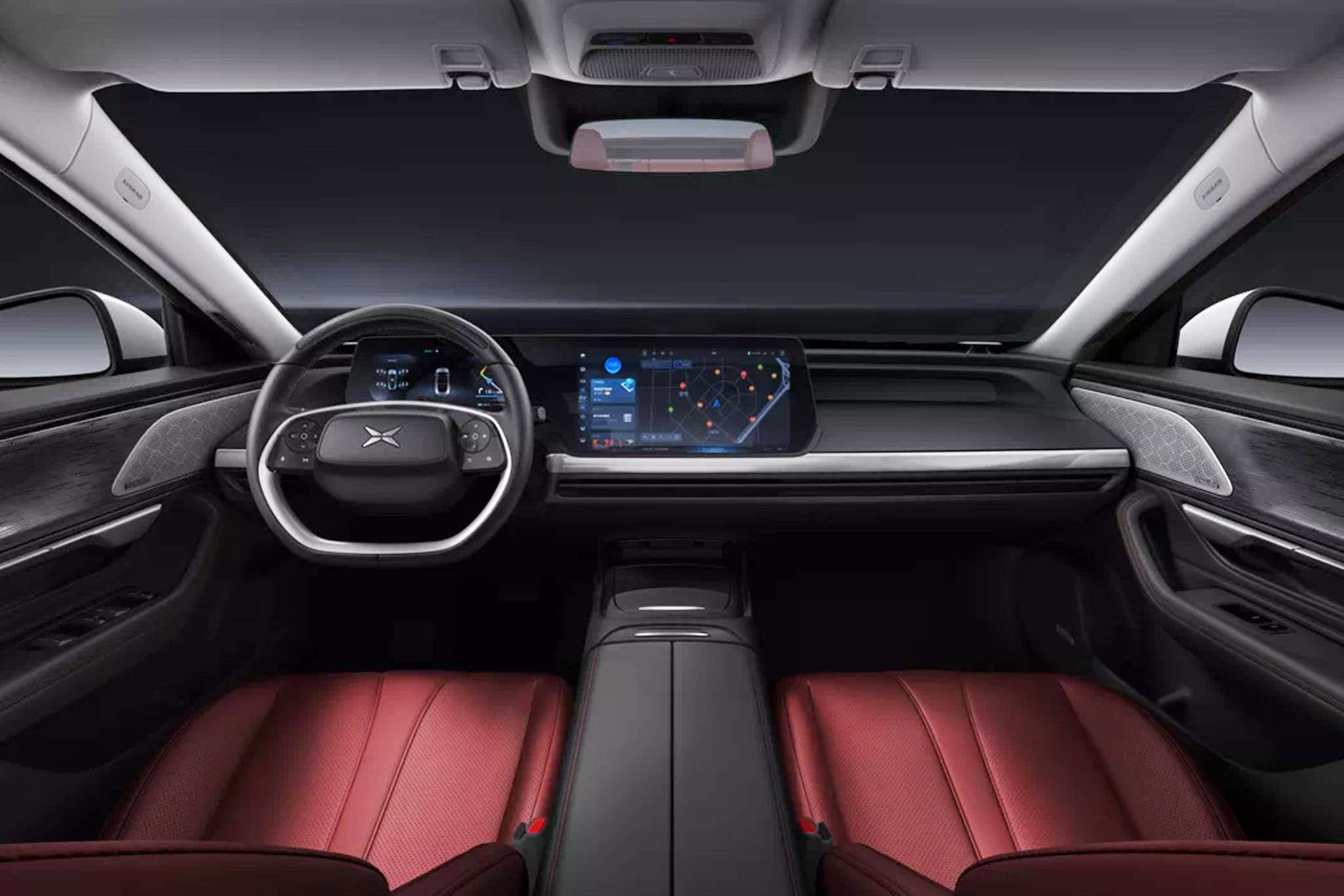 From the outside, the P7 has a clean shape, with not a single hard-edged line stamped into its sheet metal. Inside, the design is clean and modern, with a Model 3-like central touchscreen—but also a more traditional “instrument panel” screen behind the steering wheel. Controls are largely on the steering wheel or via touchscreen. Sound familiar?

Design-wise, there are both lovely touches and some puzzling choices. I was struck by the elegant simplicity of the brushed-metal interior door handles, which looked like they might’ve come off a piece of high end Scandinavian furniture. And the small corner Dynaudio speakers that rose from the outer corners of the dash echoed those in six-figure European luxury cars.

On the other hand, about a quarter of the handsome perforated speaker pattern on the doors was hidden behind the edge of the dash, almost as if the door and dash had been designed by two people who never once communicated. 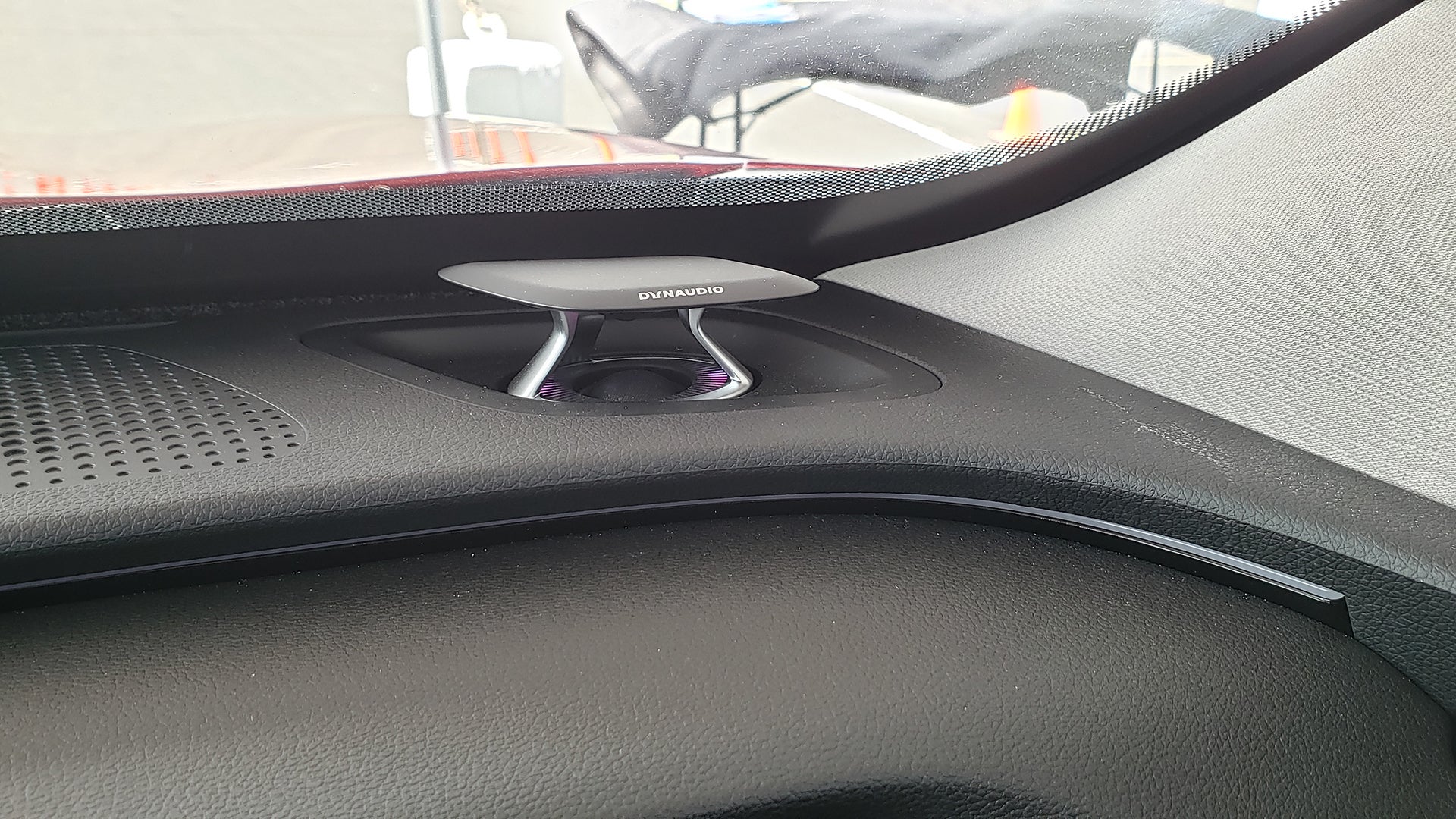 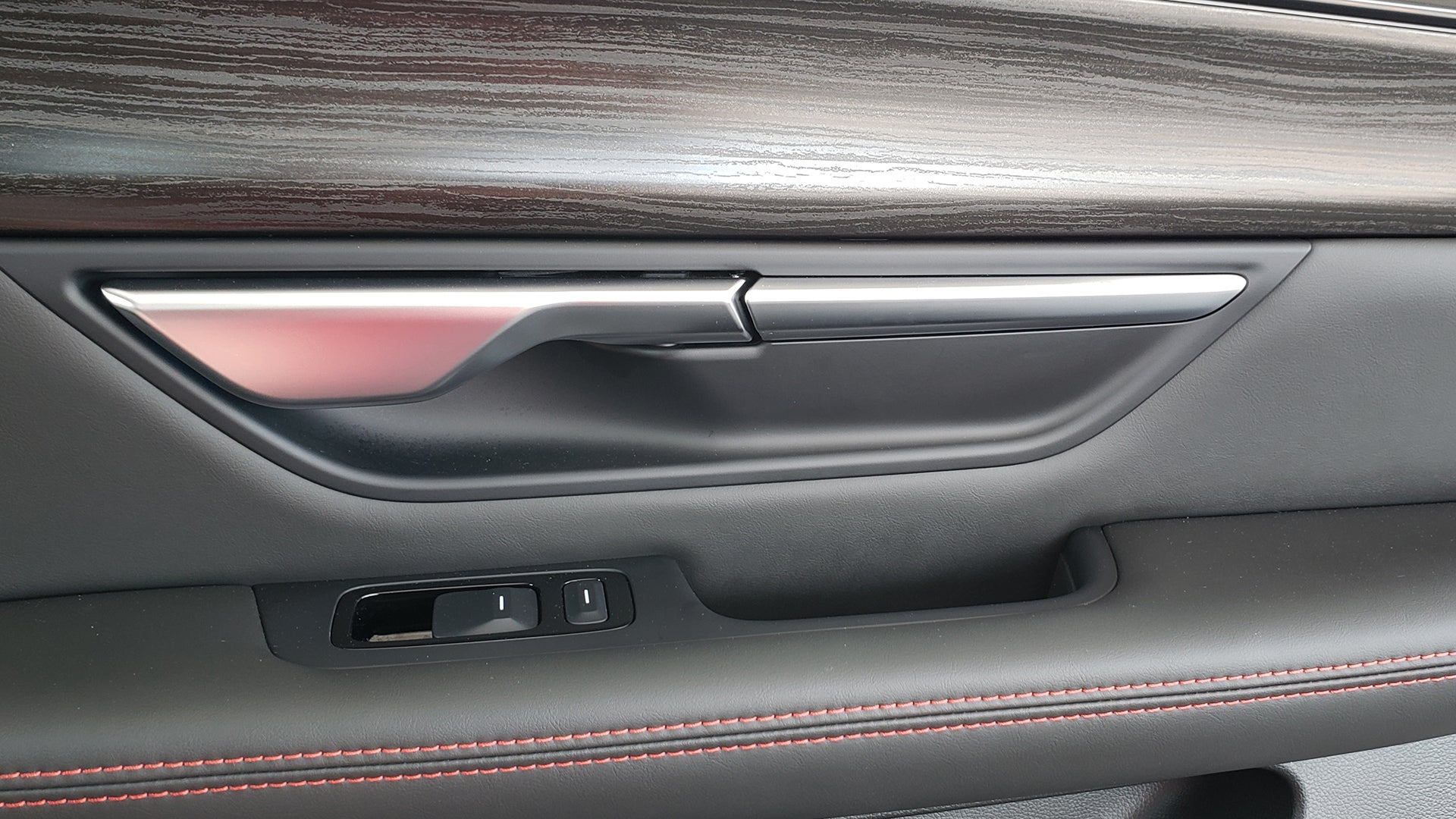 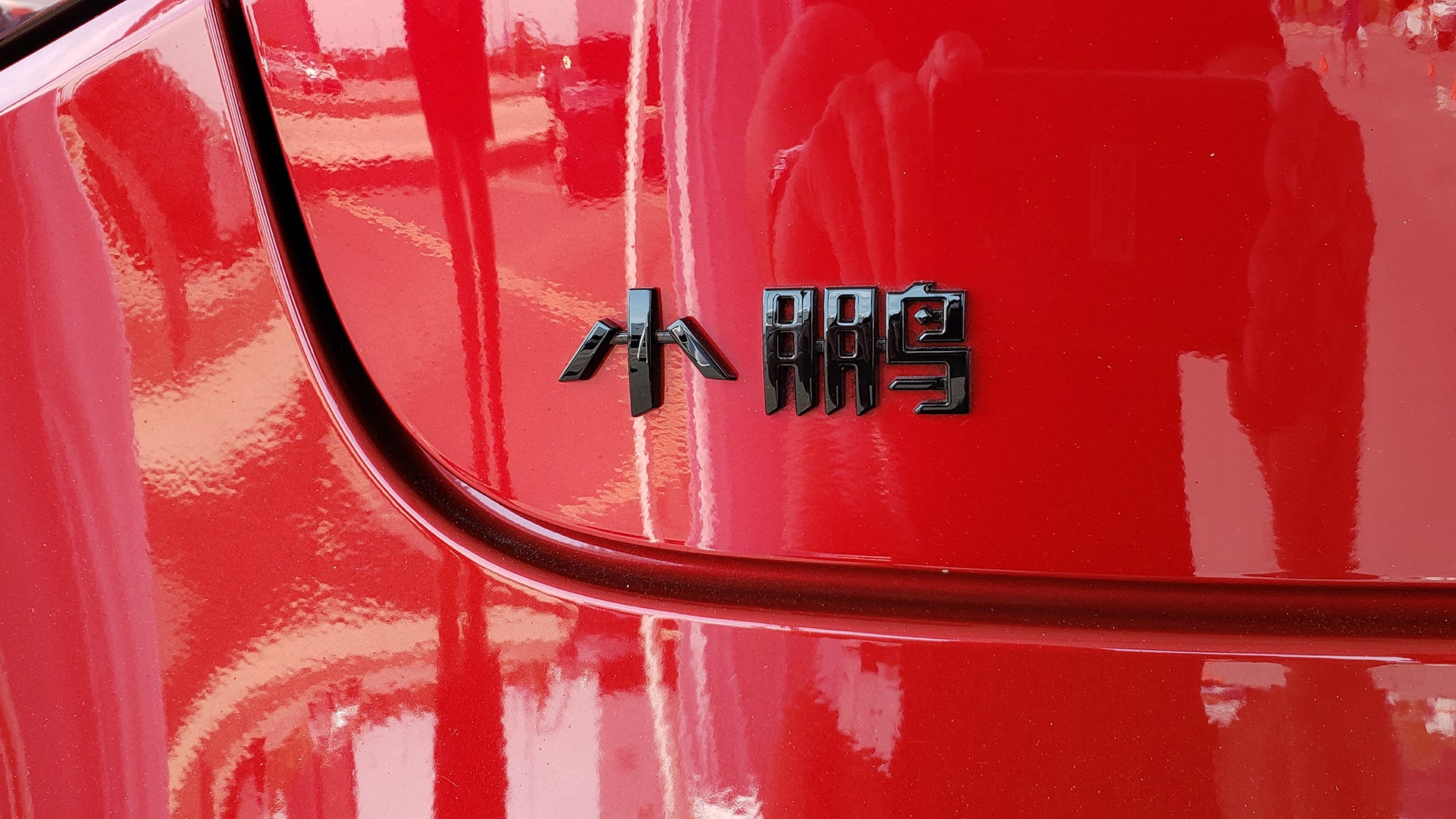 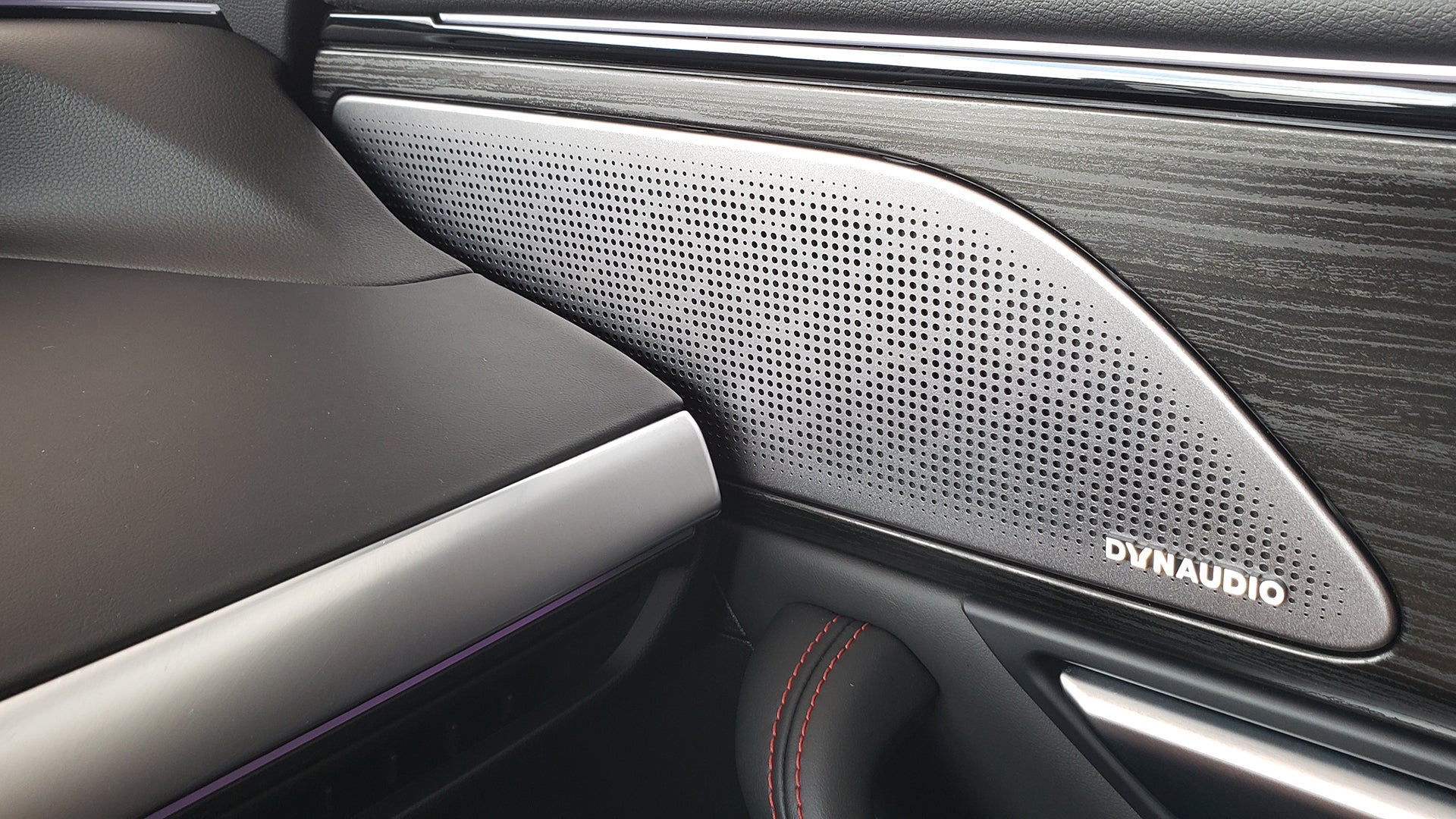 Also, a few worrisome issues of build quality surfaced right away: orange peel in the paint, a creak in one door hinge, and slightly gummy rubber on the back of the interior door pulls.

Three basic variants exist: RWD Long Range, RWD Super-Long Range, and 4WD High Performance. I drove the latter, which shares its 80.9-kilowatt-hour battery pack with the “Super-Long Range” RWD model. (The low-end model has a smaller 70.8-kwh battery.) Its combined motor output was 430 horsepower, with torque quoted at 483 pound-feet of torque. Spicy. Zero to 60 mph comes in a respectable 4.4 seconds, still is over a second slower than the quickest Model 3’s 3.3 seconds.

The quoted range was 349 miles (562 km). But a big caveat: that number comes from the New European Drive Cycle (NEDC), by far the least realistic and most optimistic among global test cycles. An EPA rating might be as much as 30 percent lower, perhaps 245 miles (and the same caveat applies to the Super-Long Range’s quoted max of 439 miles).

My drive course was laid out in a New Jersey stadium parking lot, included a straightaway for testing acceleration and braking, some long looping curves, a moose test, and a high-speed slalom. It’s a limited setup for any review, but several things became clear right away.

First, the P7 is definitely set up to be cushier than any Tesla, something a Xpeng representative was quick to point out as a selling point. That’s definitely true in the Chinese domestic market, with its chronically congested city traffic and few equivalents to high-speed autobahns. A soft ride makes complete sense there. It doesn’t exactly pay dividends on a handling course, though, and the P7 would need some serious attention to its suspension, tires and brakes before any attempted launch in America. 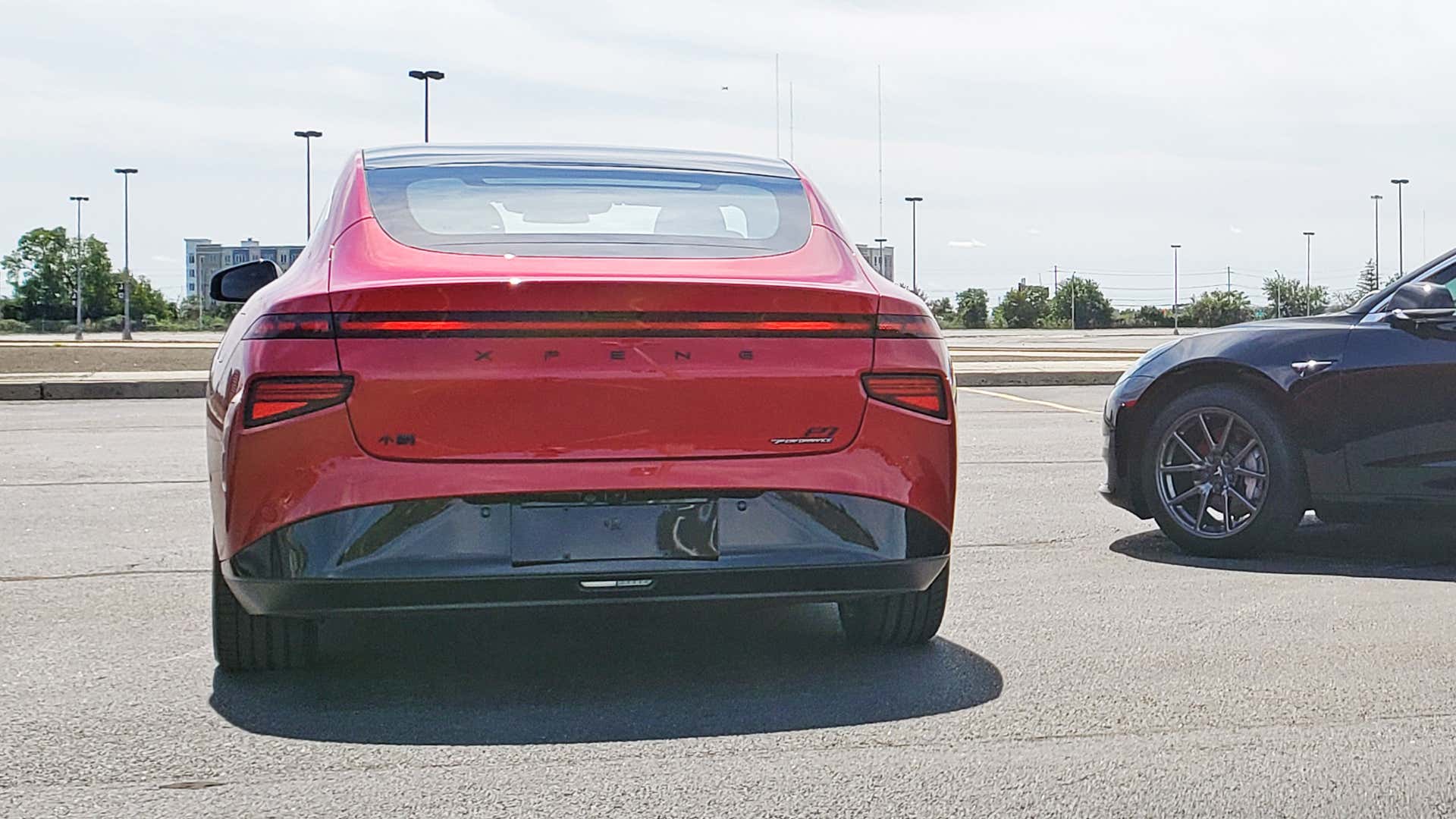 Acceleration was fine, as you’d expect for an EV. But in hard braking at higher speeds—even on this short course—the tires lost traction more than once on the relatively smooth asphalt and triggered the antilock brakes. That’s unacceptable in the cheapest economy sedan. One could argue that the strong Brembo brakes overwhelmed the tires’ grip. But for reference, the last time that happened to me was years ago, during the launch drive for the 2014 Mitsubishi Mirage. Ahem.

In cornering, it was easy to get the tires to squeal in fast turns—and, again, the anti-lock brakes kicked in a few times when brakes alone should have sufficed. I can only conclude the tires were chosen for smoothness and comfort under Chinese city driving, not grip in faster U.S. traffic. But for even what I’d call moderately aggressive driving, let alone full Jersey highway combat, they were nowhere near enough.

Regenerative braking, even on the stronger of the two settings, was weaker than that of a Tesla, never mind a BMW i3. It also lagged slightly when engaging, and the resulting deceleration didn’t feel entirely linear. Subtle things, to be sure—but if you’re gonna mimic Tesla, you’re gonna be compared against Tesla.

One unexpected part of the Xpeng was the deep integration not just of apps, but e-commerce, music, video, and gaming.

I was admittedly fascinated by the built-in racing game, which has surprisingly good graphics and lets you use the steering wheel and controls to play. This is only possible when parked, of course. Similarly, video streaming services and rentals are available for in-car entertainment. Look on that as a model for what the rest of the world’s carmakers aspire to—getting you to spend money regularly via your dashboard. 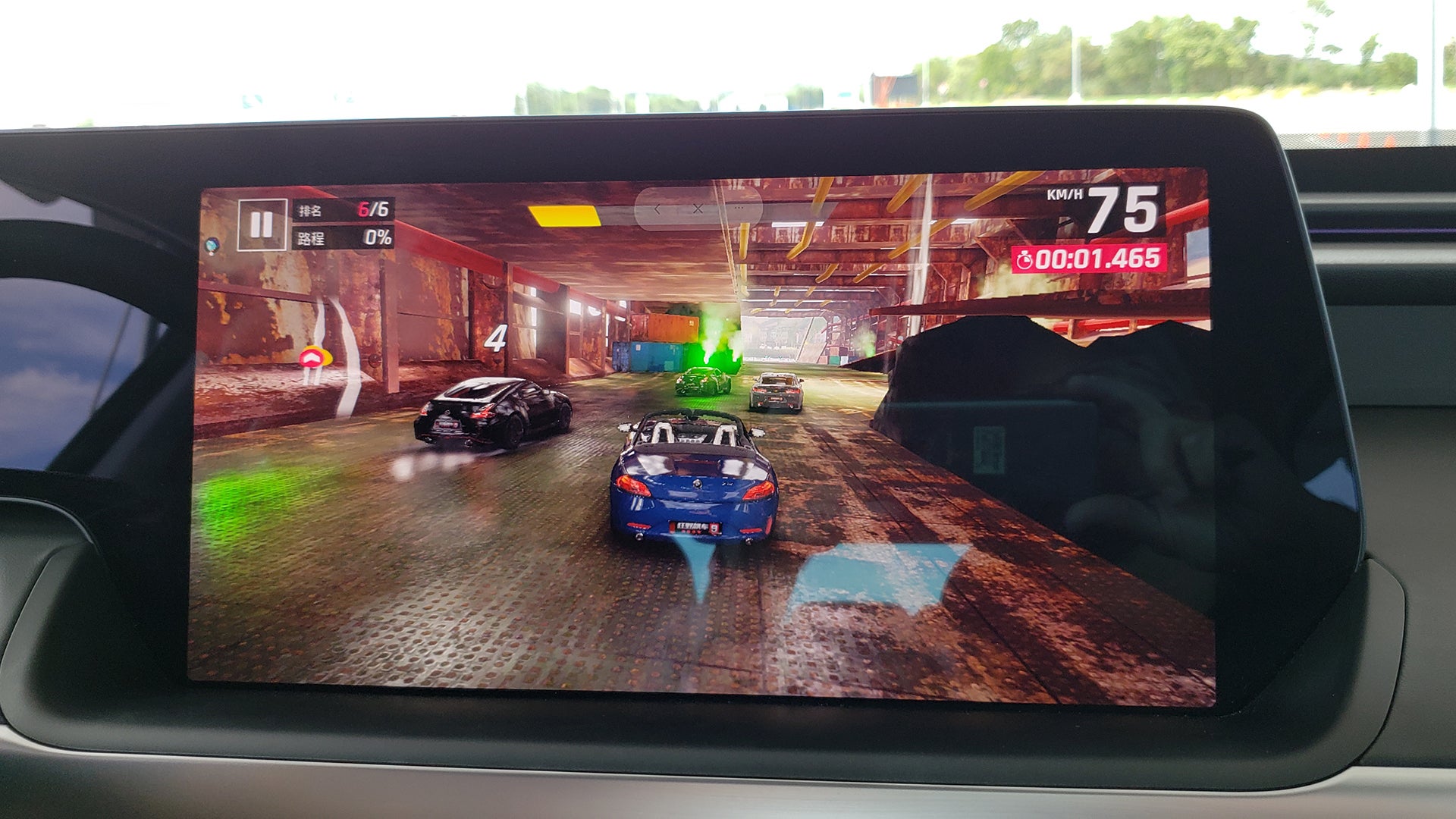 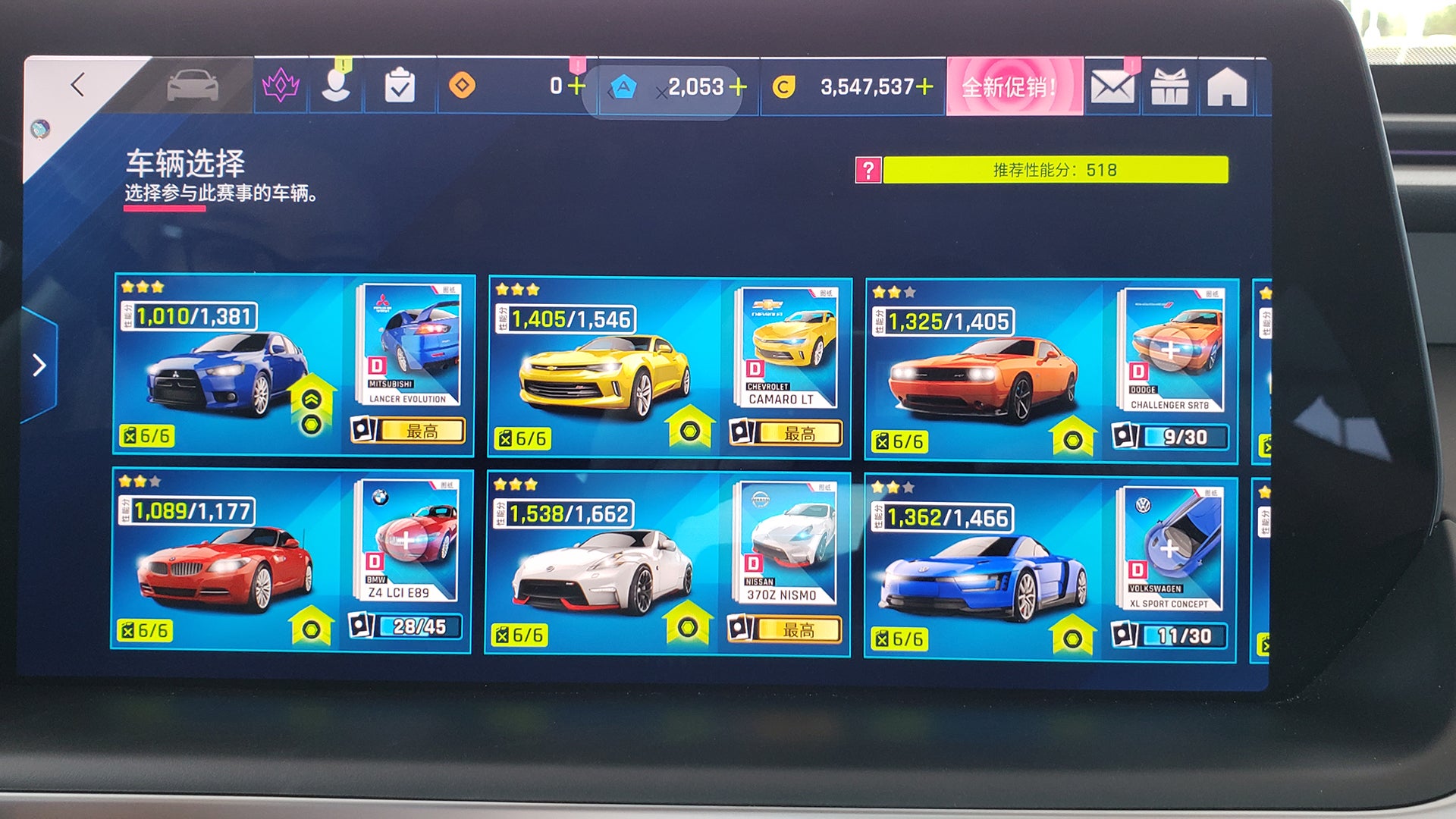 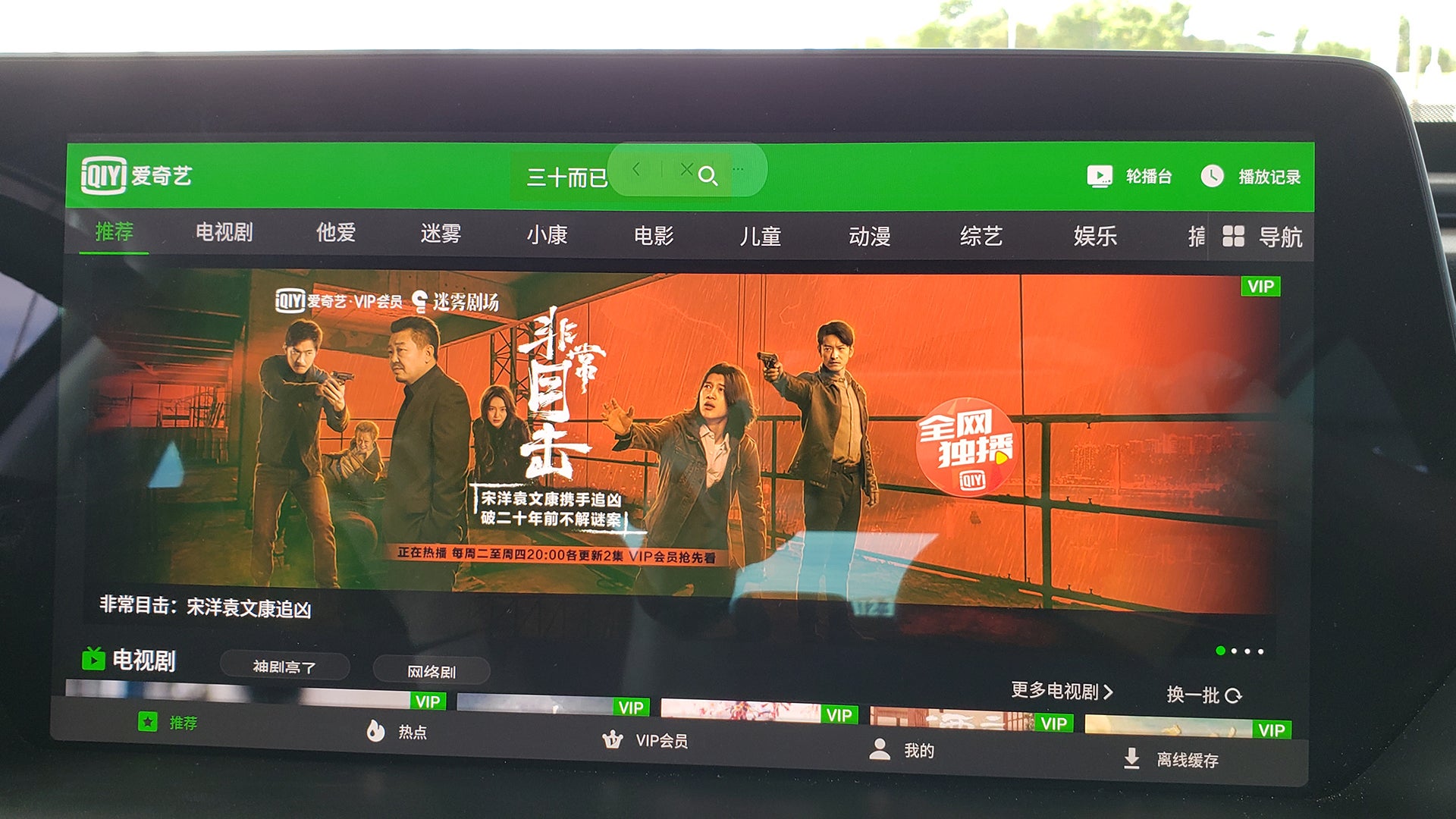 We still have a lot of questions about charging, and the ease of doing so, however. Tesla has deep experience both with setting up its own charging networks and, outside North America, also working with existing networks. Its navigation system not only routes the car via appropriate fast-charging stations for road trips, but specifies how long to charge at each stop to minimize dwell time.

Meanwhile, European makers are starting to integrate ‘Plug And Charge’ capability, meaning the car identifies itself to the charging station, and all billing is handled automatically on the back end—no network membership or credit card required.

Does Xpeng offer similar capabilities in its home market? No answer—the Xpeng rep promised she would get back to me.

Not There Yet. But Closer Than You Think

Predictions that Chinese cars will enter the U.S. and swamp the market are now going on 20 years old. I remember back in 2008 when no fewer than six separate Chinese automakers exhibited their newest vehicles (none electric) at the Detroit auto show. We can be honest here—they were pretty appalling cars, from material and build quality to safety. It all signaled developing market.

But times change. China’s car industry has done a whole lot of growing up over the last decade. The market is so big that its companies don’t need to branch out to America the same way European and Japanese imports needed to in the 20th century. Don’t get me wrong, they’d love to plop an Xpeng dealership in Toledo one day. But the fact that the P7 isn’t ready for that yet isn’t a problem. Not today, anyway.

Sooner or later, it’s likely that a Chinese brand will enter the U.S. market. (I don’t count Kandi, now taking U.S. orders for its tiny, underpowered electric hatchbacks.) Industry analysts say it takes $1 billion to establish a new auto brand in the country: $100 million every year for a decade. You can’t do it on the cheap if you want to reach volume. Just ask Hyundai or Kia.

Will Xpeng be that company? I’d probably put it low on the list, behind, say, BYD or Geely (owner of Volvo and Polestar) or a few others. But if I took one thing away from our Xpeng P7 drive, it was this: A company that was only founded five years ago is selling a car that has perhaps 75 percent of the features and capability of a Tesla. It’s not as fast, efficient, or composed. It’s cheaper, though, starting at the equivalent of $33,000, presumably before any incentives. Reliability? I can’t say, but the bar is pretty low there.

But remember this: China intends to own the world’s largest share of electric-vehicle manufacturing, just as it has done with photovoltaic solar cells and is in the process of doing with lithium-ion battery cells. China has bought more EVs than the entire rest of the world put together to date, and its industrial policy makers are determined to keep it that way. The country doesn’t have a lot to offer the world of internal-combustion engine vehicles, except incrementally lower cost. But its extreme focus on digital technology and energy storage mean it may well swamp whatever electric-car efforts the Detroit 2.5 make.

If that happens, cars like the Xpeng P7 might show up on our streets after all. Hey, at least you’re prepared.