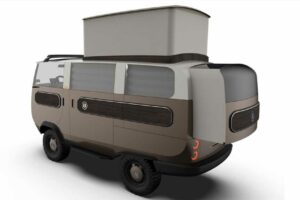 The innovative eBussy electric bus system from German startup company ElectricBrands will never come to be. Say it again: eBussy (insert snickers). What could have perpetually been the butt of every conceivable joke will be joked about no more. The undoubtedly sophisticated Germans who manifested the eBussy project must have concealed muffled laughs (like us) as they engineered, designed, sculpted, and meticulously labored away at the eBussy. Perhaps there were too many slip-ups during meetings. Perhaps there were too many Google-search debacles. Perhaps people just didn’t understand that eBussy was short for electric bus system. Whatever the exact reason, the eBussy name is dead, and it now identifies as the XBUS.

Indeed, long live ElectricBrands’ quest to develop (what it claims is) one of the most sustainable light electric vehicles on the planet, which is now forever referred to as XBUS. We will never, ever, ever, say eBussy again. After three years of development, the XBUS by ElectricBrands is now a fully functional prototype that’s awaiting its imminent world premiere. Production is slated to begin in Germany in mid-2022, which includes the fulfillment of about 9,000 pre-orders and about 10,000 orders from a European network of about 600 dealers.

The first XBUS prototypes are emerging in Germany and other European markets, but guess where it’s also headed? To the North American market. According to the company’s website, the ordering system for folks in the U.S. of A. will open on September 1, 2021. Naturally, ElectricBrands will have to reevaluate the feasibility of the XBUS in all potential markets in the coming years, but it’s a bit exciting that, theoretically, we could see this groovy van-like thing on our roads.

The XBUS electric bus system, built upon a standard or off-road chassis, is all about modularity—body modules and battery modules. Like Legos, there are multiple modules that can change the rear configuration of the XBUS. Basically, 10 interchangeable bodies can transform the XBUS into a convertible, station wagon, pickup, van, camper van, or box in no time. We’d opt for the XBUS Offroad Camper. It offers more than 370 miles of driving range (courtesy of a 30-kWh battery pack) and can carry up to 2,200 pounds, per the manufacturer. Is the XBUS too good to be true? We’ll see.