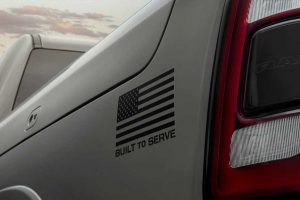 Ram recently announced the release of the latest—and, apparently, last—variant of its full-size 1500 pickup’s Built to Serve special edition trim. Each Ram 1500 Built to Serve honors a branch of the United States military: the Army, Marine Corps, Navy, Air Force, and Coast Guard. Notably missing from this list, however, is the recently formed Space Force. How, then, can this fifth iteration of the Ram 1500 Built to Serve be the end of the line for this special trim when the military contains six branches? We reached out to Ram’s parent company, Stellantis, for an answer, but have yet to receive an official comment.

Although Ram states the newest, Coast Guard-inspired Ram 1500 Built to Serve pickup marks the “final phase” of the limited-edition line of trucks, the brand still could at some point release a Space Force-inspired 1500 model. If the prior Ram 1500 Built to Serve trucks are anything to go by, then this theoretical sixth model would follow a familiar formula: an interior with contrast stitching, seat-mounted Velcro panels on the seats, gray 20-inch wheels, body-color fender flares, darkened headlamp bezels, and a black grille, as well as black trim pieces, badges, exhaust tips, and side steps. Likewise, Ram would surely include the 4×4 Off-Road package with its all-terrain tires, locking rear-axle, various skid plates, and heavy-duty shocks on the truck.

In other words, the content of a theoretical Space Force-inspired Ram 1500 Built to Serve is rather predictable. What’s less predictable, though, is how Ram might opt to paint such a vehicle. The brand honored the Army with the hues Gator (green) and Diamond Black Crystal; the Airforce with Anvil (gray) and Billet Silver Metallic; the Marine Corps with Tank (green) and Flame Red; and the Coast Guard with Spitfire (orange) and Bright White. What sort of color might a Space Force-themed Ram 1500 Built to Serve wear? Well, why not space itself?

We’d like to think that Ram would spray the truck with a deep, mysterious coat of black paint to the truck and add stars to further drive home the Space Force angle. Sure it’d be a more expensive route than a simple flat color, but such a color scheme would grace a limited-edition model. Ram might as well spend the extra bucks to properly honor the Space Force and create a Ram 1500 that’s truly special.

Whether such a Ram 1500 Built to Serve ever sees the light of day (or the darkness of space) is another question entirely. We doubt it, given the language the brand used in its accompanying press release for the latest Built to Serve truck. Still, stranger things have happened, and if Ram decides to reverse course and honor the sixth branch of the U.S. military, it might want to follow our lead by giving the limited-run truck a paint job worthy of the Space Force.