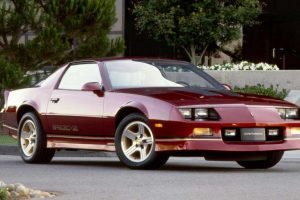 For those who came of automotive age in the 1980s, there was only one Camaro to have: the IROC-Z. Chevrolet offered the IROC-Z trim model of the Z/28 from 1985 to 1990, its badge nodding to the International Race of Champions series that sprang from the brain of Roger Penske to become a fixture on ABC’s Wide World of Sports. While real IROC race cars were massaged production Camaro bodies riveted to a Banjo Matthews NASCAR chassis and stuffed with a 450-hp Katech-built small-block V-8, the retail version was, well, something less than that—but it hardly mattered.

The race series invited champions from all walks of racing, including NASCAR, CART, Le Mans, and even NHRA, to compete in identically spec’d cars. No matter who won, they were always driving an IROC Camaro and as the saying goes, win on Sunday, sell on Monday. The Camaro on which the IROC was based debuted in 1982, its wide, low, chiseled looks winning fans instantly, including yours truly; the Z/28 was the top trim, but was supplanted by its IROC spin-off. That car was distinguished by its sexy 16-inch wheels, spoiler, body cladding, special graphics, basso profundo exhaust, and optional tuned-port 305-cubic-inch small-block V-8.

The IROC had a sound and look all its own, and by 1987, the 350-cubic-inch TPI engine (RPO L98) had finally been lifted from the Corvette and placed under the IROC’s hood to the delight of Chevy fans everywhere. The third generation of the F-body platform under the Camaro was shared with Pontiac’s Firebird model, the Formula and Trans Am models of which also got the tuned-port versions of the small-block Chevy in 305 and 350 displacements. This gave GM what seemed like a formidable advantage in Detroit’s muscle-car battle.

It was around this time that I became actively involved. A fresh college graduate with a full-time job, the die was cast after a coworker urged me to test-drive a new Mustang GT in 1986. In those pre-internet days, I read every buff magazine that bothered to print anything about Camaros, Mustangs, Firebirds, Corvettes, and the various FWD 2.2L turbo K-cars coming from Chrysler. In the mix also were Buick’s Grand National and Turbo-T Regal.

The test drive in the ’86 Mustang GT went well, but perhaps being thriftier than your typical 23-year-old, I wasn’t satisfied that a fully loaded Mustang GT was the answer. Then the October 1986 issue of Road & Track hit newsstands with a deep-dive comparison between the 1987 Mustang GT and the 1987 Camaro Z/28 IROC. Equipped with the top-of-the-line 350 L98, the IROC won the top-speed battle, but it just didn’t pass the sniff test. I wondered, how could the IROC, with 220 additional pounds of mass and 5 fewer hp beat the GT? (That publication listed the IROC at 220 horsepower versus the Ford’s 225.) Not only that, the IROC in as-tested form cost a wallet-busting $5,700 more in 1987 dollars.

The argument might have been settled by that story among the Lotus-driving staff at R&T, but it was far from factually accepted out on the street. As cars began hitting the boulevard and head-to-head stoplight encounters became more regular, a pattern developed. The 5.0-liter Mustang drivers kept pulling out the win. Meanwhile, at Cars Illustrated magazine, the gloves were off. Chevy IROC and Pontiac Trans Am test cars were (against press-fleet loaner rules) being street raced and getting slaughtered from Bayonne to Brooklyn. It wasn’t a pretty sight.

In the October 1987 issue, Cars Illustrated reviewer Tony DeFeo tried to put a weak positive spin on the 1988 350-cubic-inch IROC, but in the end showed his disdain for the car by photographing it in front of a row of porta-potties. He hasn’t been seen at a Chevy long-lead press preview since. (You can read that story here. )

The problem with the IROC was three-pronged: too many less-than-great engine choices, too much cost, and too much weight. The Chevy guy looking at new IROC Camaros could choose from the top-of-the-line TPI 350 L98 (225 hp), the midline TPI 305 LB9 (215 hp), or the sleepy four-barrel L69 (190 hp). They all looked the same from the outside, but in practice, almost none on the street had the 350. By the time dealers added thousands in price-bloating options, the 350-cube IROC became astronomically priced relative to the competition. Even a similarly equipped L98 350 Pontiac Firebird Formula 350 could be had for thousands less. In practice, 350-powered F-bodies were barely a match for the Ford Mustang 5.0-liter, which in its lightest variant—the square-back coupe—delivered nothing less than a death sentence to a stock IROC at a stoplight. The running joke: IROCs were owned by hairy-chested Italians wearing gold chains and driven to discos, not drag strips.

That original Road & Track cover story—though it tried to make the case for the IROC—caused me to make up my mind to buy a Mustang LX 5.0. I can trace that decision to a specific detail in the story: “As it happened, our prototype Mustang GT (one of only two in existence) was manned by Product Development Engineer Arch Cothran when it arrived at TRC. After the 148-mph lap, Cothran calmly said, ‘It’ll go faster in fourth.’ Now here was a man confident in his product. The message was duly relayed to our driver, who has something of a penchant for the big number himself. RPM was climbing in fourth, he said from the far side of the track, hitting 5,800, then more. The needle was somewhere very close to the 5,900-rpm redline, he said, when the funny noises began. That was the end of that engine, an engine that had been through many hard miles of magazine and Ford testing. It died 100 yards short of the groundhog. A tie almost.” On the next page, one stat stood out like a sore thumb: the IROC Camaro’s 16.9 pounds per horsepower versus the GT’s 15.9. A fortuitous choice of gearing and superior aerodynamics were the reasons the Chevy had won the high-speed shootout.

The experts in the audience know I’m glossing over a lot of details here, such as the fact Chevy tightened the option sheet later in the third-gen Camaro’s life. Plus the fact that Ford had an almost opposite strategy from Chevy in that instead of optioning a car up (Camaro RS, Z/28, then increasingly powerful levels of IROC engines), Ford optioned down from the GT, to the less-expensive LX 5.0-liter hatchback, then the even less-expensive LX 5.0-liter coupe—all with the same 225-hp 5.0-liter small-block Windsor. Even Buick went that route; if you couldn’t eat a Grand National payment every month, then get a Regal Turbo-T with roll-up windows for $4,000 less—the same car, only you could get it in, like, 12 colors versus the GN’s single choice of black.

Eventually, I arrived at Bob Dunn Ford in Greensboro, North Carolina, on Thanksgiving Day of 1986 with the October 1986 issue of R&T in hand. I’d just come from next door, where I’d driven an IROC at the Chevrolet store. I couldn’t hand over my $500 deposit for a new Mustang LX 5.0-liter hatchback fast enough. Like a lot of youngsters looking for their first new set of wheels, I wanted performance, but I couldn’t afford to pay through the nose. I honestly liked the looks of the IROC better, but between losing a stoplight race and making the higher payments, I just couldn’t abide the F-body.

That’s not to say I never regretted that choice. When the May 1987 issue of Automobile came out with a beautifully photographed pair of F-bodies on the cover, I snatched it off the newsstand. (Click to download the story here. )  It was the first time I’d read anything of substance about the TPI-powered Firebird Formula, a car that seemed to be built just for me—and you could get one with the 5.7L L98 TPI without paying a huge mark-up. It was too little, too late. I was a Ford guy by then but would always be a dollar-per-hp guy above all else. Ten years later, I happened upon a used 1988 Firebird Formula 350 for sale in mint condition at a great price, which I gladly bought and enjoyed immensely. That Formula 350 taught me there’s more to life than just horsepower!