Why a new V8 Defender is just the start for Bowler 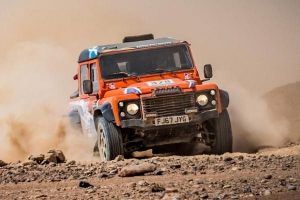 News of Bowler’s Defender-based CSP 575 project ought to be greeted with excitement by anyone familiar with the brand. Not only is the esteemed UK rally firm back on its feet, JLR has granted the Belper-based team access to Special Vehicle Operations’ suite of powertrain technology, technical designs and testing facilities. Bowler’s just-announced supercharged ‘Defender 110’ is an early example of what can happen with those kinds of resources, but it’s the innovation that it could kick-start which is intriguing.

“There’s a lot of imagination and creativity to be shared between the teams at SVO, the [JLR] historic department and Bowler,” Calum McKechnie, general manager of Bowler, told PH when we discussed the future. “For the first time, we have inside access to those people and the technology of JLR. Our CSP base is [technically] flexible – it was already highly flexible for a number of uses before JLR got involved – so we can work with the rigid chassis and take other drivetrains in future versions.”

This inherent modularity to the CSP base, coupled with newfound access to JLR parts, means the sky's the limit for future Bowler road products. Michael van der Sande, managing director of SVO, was keen to emphasise to PH that Bowler’s competition stuff (pictured here) will remain core to the brand. But he said that there are enormous opportunities for the road division, where each brand “can share learnings back and forth”. He said, “it’s very much about selecting the right ideas…to create elegant and exciting combos, with Bowler’s race and chassis mixed with SVO’s technology.”

So, what could we expect to follow the CSP 575? It seems the Defender shape itself might remain of use in future cars, what with SVO having granted Bowler permission to remake the 110 body for its latest project. Van der Sande denied that the decision had been made following the launch of cars like the Ineos Grenadier, and instead argued that “there’s a huge market for those who like the original shape” that is purely driven by “customer demand”, while being “complementary” to the new Defender.

Presumably a Defender 90 version would be fairly easy to achieve, while giving Bowler a lower cost road model that could sit beneath its £200k 110. Van der Sande didn’t straight out deny the chances of that, but he did state that “the 110 is the car that mostly closely hits what most customers are after right now”. He said, “it’s to be very small volumes… but we do see ourselves growing to produce a few dozen cars a year”. It seems demand, rather than technical ability, will decide what sort of Defender Bowler is to produce next.

Other body shapes could be considered, too; Bowler has already produced the old Range Rover Sport-bodied EXR-S for competition, after all. Van Der Sande explained that the 1,000-hour build time required to complete a Bowler ensures that each car will “come with a flexibility to do unique stuff”. He said, “that’s part of the fun,” but was cautious in suggesting this application would venture further than combustion engine machines, at least for now – despite a surge in EV 4x4s of late.

“Electric tech is rapidly catching up with what people want, but it can’t do a 1000-mile endurance race in a desert, not yet,” he said. “We’re actively talking about it to find the right application, but at the moment it’s about making the right choices at the right time.”

Whatever their shape or technical layout, it seems certain that Bowler’s future road machines will be developed and built to the same standard as its world-famous competition cars, with production handled entirely at its Derbyshire base. McKechnie said Bowler’s work will also continue to include “a huge amount of service and parts supply”, and he sees that extending long into the future. He added that Bowler will “keep doing accessory work, development and sales,” and that no matter what, Bowler is set to continue with its “multi-layered product offering”. Only now with the addition of road models to the company’s portfolio.

It seems somewhat inevitable, then, that the Bowler line-up will one day include models that are more attainable than its opening run of £200k, 575hp hellraisers. But neither party wanted to comment on how far the brand’s road cars could reach; understandably, the focus is at first on launching the CSP 575. Still, it’s hard to resist conjuring up the possibilities – especially given Bowler's impressive track record. Providing it with the freedom to explore the economies of scale inside a global car maker – one equipped with a veritable toybox of old body shapes and new technologies – ought to deliver some future British cars to die for.