Home » What You Need to Know About Solid-State Batteries

What You Need to Know About Solid-State Batteries 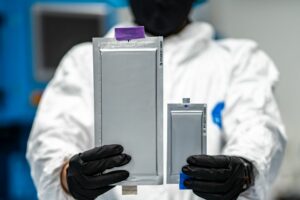 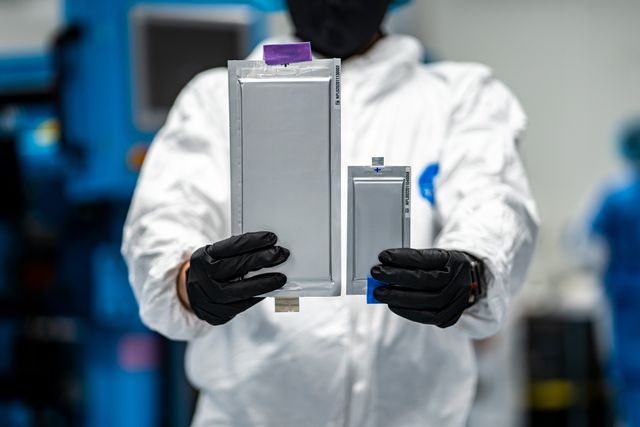 The world of the internal combustion engine will sadly, but very necessarily, come to a close at some point in many of our lifetimes. Hybrids and electric vehicles are becoming more affordable and more advanced at a rapid pace, which means batteries are taking the place of fossil fuels. This has led to an equally rapid progression in battery technology, with the main goals of improving capacity, charging times, and safety. One major advancement in this field is the advent of solid-state batteries, which promise to push the boundaries of the limitations that current lithium-ion batteries carry.

What are Lithium-Ion Batteries?

Electric vehicles have been powered by lithium-ion batteries for years, which are similar to the ones used in laptops, cell phones, and other consumer electronics. They are constructed with a liquid electrolyte inside, which makes them heavy and susceptible to instability at high temperatures. Because each individual battery pack can’t generate all that much energy on its own, several have to be linked together in series, further adding to the weight. The cost of engineering, manufacturing, and installing battery packs makes up a considerable portion of the overall cost of an electric vehicle.

Just like a cell phone, the lithium-ion batteries in electric vehicles need to be recharged. The speed at which an electric vehicle’s batteries can be charged depends on the vehicle itself, the type of batteries it uses, and on the charging infrastructure. In general, public charging stations fall into either the Level 2 or Level 3 categories, both of which can charge an EV far quicker than a standard household outlet. Level 1 and Level 2 chargers provide power to the on-board charger via AC power, which is converted to DC power to charge the battery. Level 3, which can also be called DC Fast Charging, bypasses that on-board generator and instead charges the battery directly and at a much quicker rate. Over time, however, both the battery capacity and the ability to reach peak charging rates degrade.

How Solid-State Batteries Are Different

Solid-state batteries aren’t a new thing, but their use in such a heavy-duty application, such as in an automobile, is. They’ve been in use for years in small devices like pacemakers, wearables, and RFID. Expectations surrounding solid-state batteries’ ability to vastly improve electric vehicles are high, to say the least. The use of a solid electrolyte should save space, due to its smaller footprint than traditional liquids. In the same space that a lithium-ion battery needs under a vehicle, a solid-state battery should have somewhere between two and 10 times the capacity. Their construction also means that they don’t need all of the monitoring, control, and cooling systems that lithium-ion batteries need to function properly. That means more room in the vehicle’s chassis for battery placement with less intrusion into the space typically occupied by passengers or mechanical components.

Greatly improved energy density and a reduction in weight from the removal of the battery’s liquid component should improve range in electric vehicles to a high degree. Solid-state batteries should charge faster, too, at least in theory.

Liquid Electrolytes Can Cause Problems

Solid-state batteries also promise to be safer and more durable over the long run. When damaged or otherwise compromised, lithium-ion batteries can experience what is known as thermal runaway, which happens when one battery cell’s increase in temperature causes a similar reaction on other battery cells. Sometimes, this process halts itself inside the battery pack, but at other times the runaway reaction can cause a fire. The liquid electrolyte can be flammable, making battery fires extremely dangerous and toxic. The process to extinguish a battery fire takes time and sometimes thousands of gallons of water. Solid-state batteries are able to avoid this issue without flammable liquid inside.

Beyond the rare potential for causing a fire, the liquid electrolytes inside lithium-ion batteries aren’t particularly great at longevity. Over time, compounds in the liquid can corrode internal battery components and can experience degradation or solid material build up inside, both of which lead to a degradation of battery capacity and overall performance.

Where are All of the Solid-State Batteries?

Why aren’t we all driving cars with solid-state batteries? Just like other emerging technologies, solid-state batteries are expensive, which is due partly to development costs, but is also heavily related to the fact that they are hard to manufacture on a large scale. Automakers and battery manufacturers also have more work to do before solid-state batteries are ready for primetime. Despite their benefits over liquids, solid electrolytes present difficulties in finding the right balance of materials to deliver enough juice to power an electric motor for a car.

Solid-state batteries are, for now, still in development. Toyota aims to sell its first EV powered by a solid-state battery before 2030, while several other automakers are working in partnership with battery produces on their own projects. Notably, Volkswagen is working in partnership with QuantumScape, a California-based company that hopes to push its batteries into commercial use by 2024.