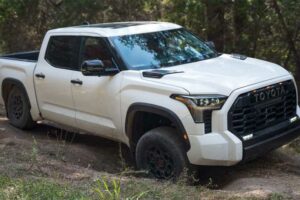 There’s a ton of overlap between off-road diehards and Toyota truck lovers—they go together like all-terrains and rear lockers. Problem is, the brand’s full-size pickup didn’t have a factory rear locker before now. Updates like that are what make the 2022 Toyota Tundra TRD Pro a better, more capable 4×4 in stock form, and that’s before we even get to the rig’s standard twin-turbo V6 hybrid powertrain.

No one can say the outgoing Tundra was bad off-road; it has its own cult following, just like the Tacoma and even the Land Cruiser. It’s got plenty of aftermarket support, too, though it’s safe to say that was out of necessity because these trucks are pretty barren to start with, even the premier second-gen Tundra TRD Pro. I spent some time in one last week and realized it lacked a lot of features that other competitors have had for a while—the aforementioned locking differential, surround-view camera angles, you get the drift.

Handily, the new top-trim Tundra off-roader does have these features, and they’re standard equipment in the TRD Pro’s case. Also making their own respective appearances are updated versions of Crawl Control and Downhill Assist Control, which help you go up and down steep, tricky grades. If you’ve driven a last-gen Tundra with either of these party tricks, you’ll be happy to know they’re far smoother in the new truck—they’re not jerky like they used to be and when engaged, the running gear doesn’t emit a horrible grinding noise. Points to the 2022 model, there.

(Pssssst! Here’s the part where I tell you that the upgrades listed above are also available on lower-trim Tundras featuring the TRD Off-Road package! That way, you can match them with the base, non-hybrid engine and still have a capable rig. You’ll have to make do with monotube Bilstein shocks, but hey, not bad for the coin you’re likely to save.) 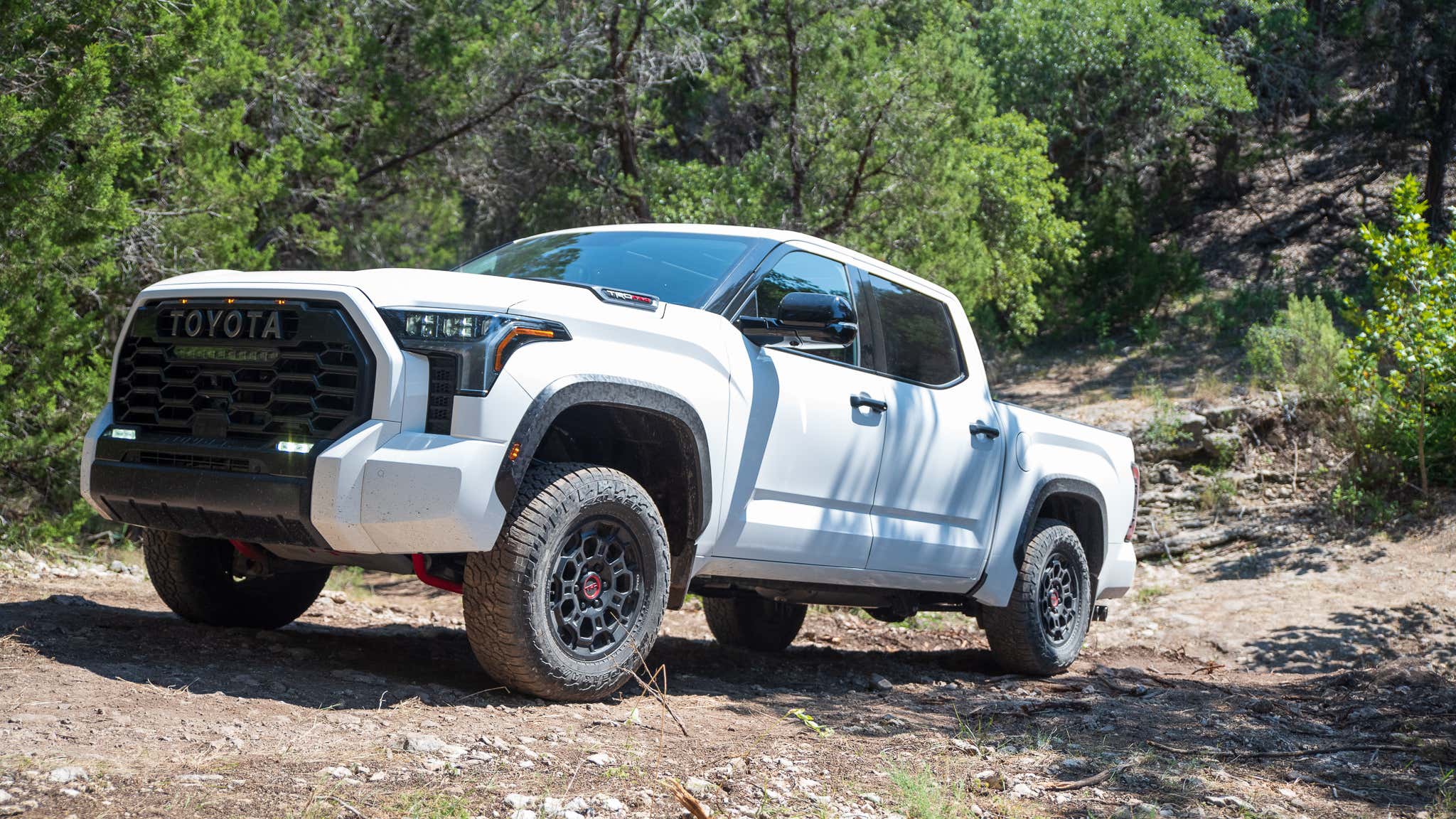 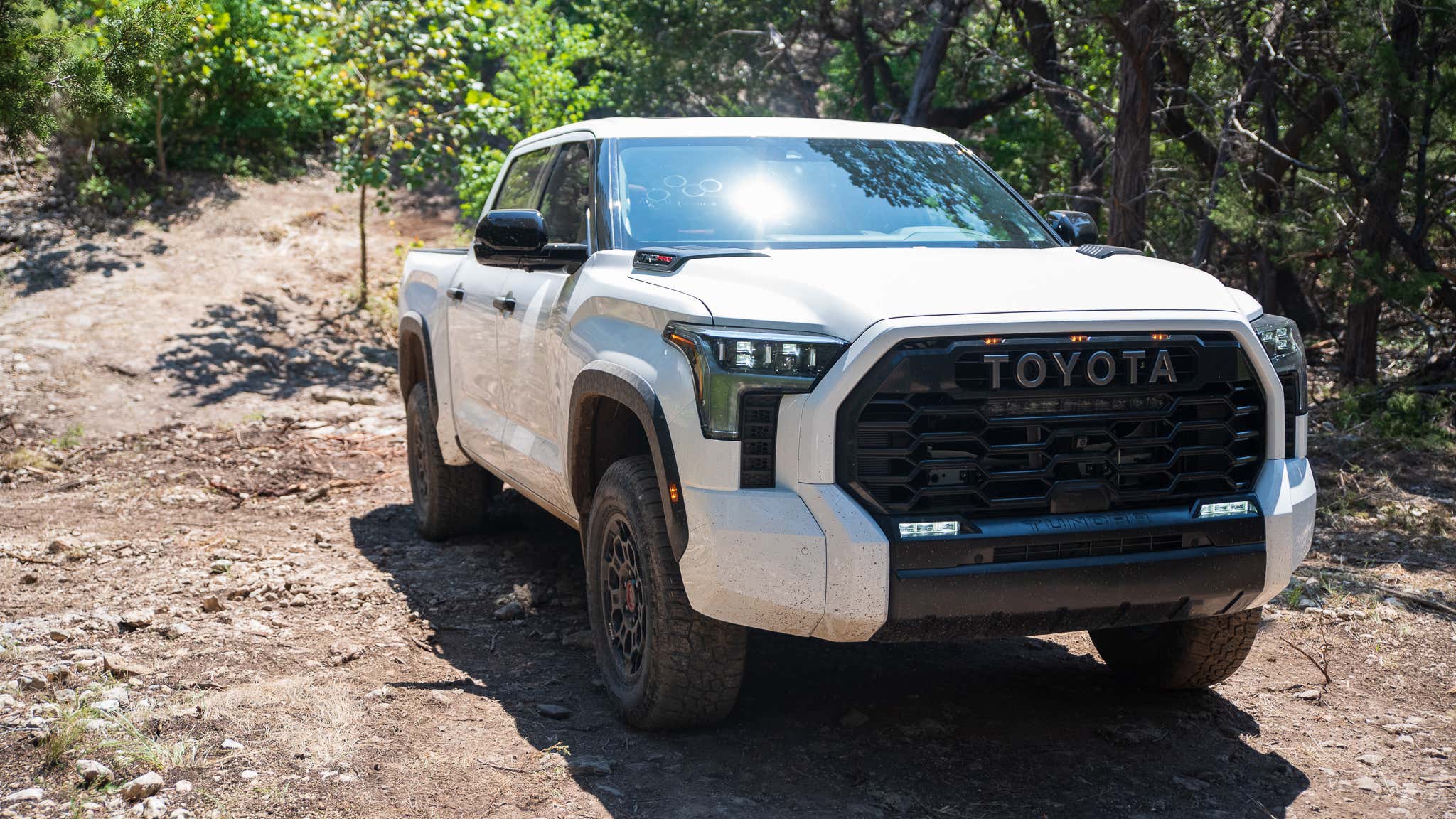 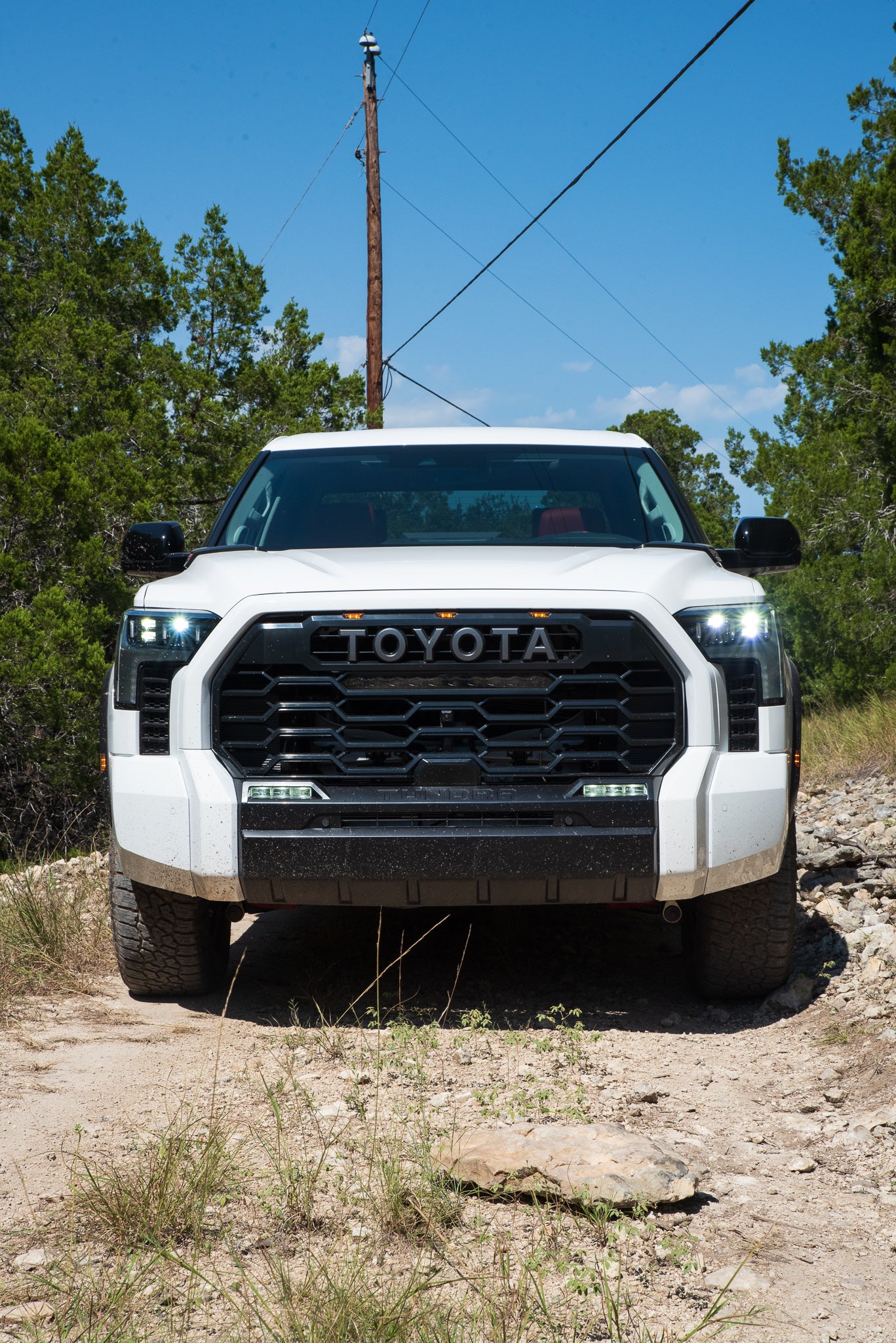 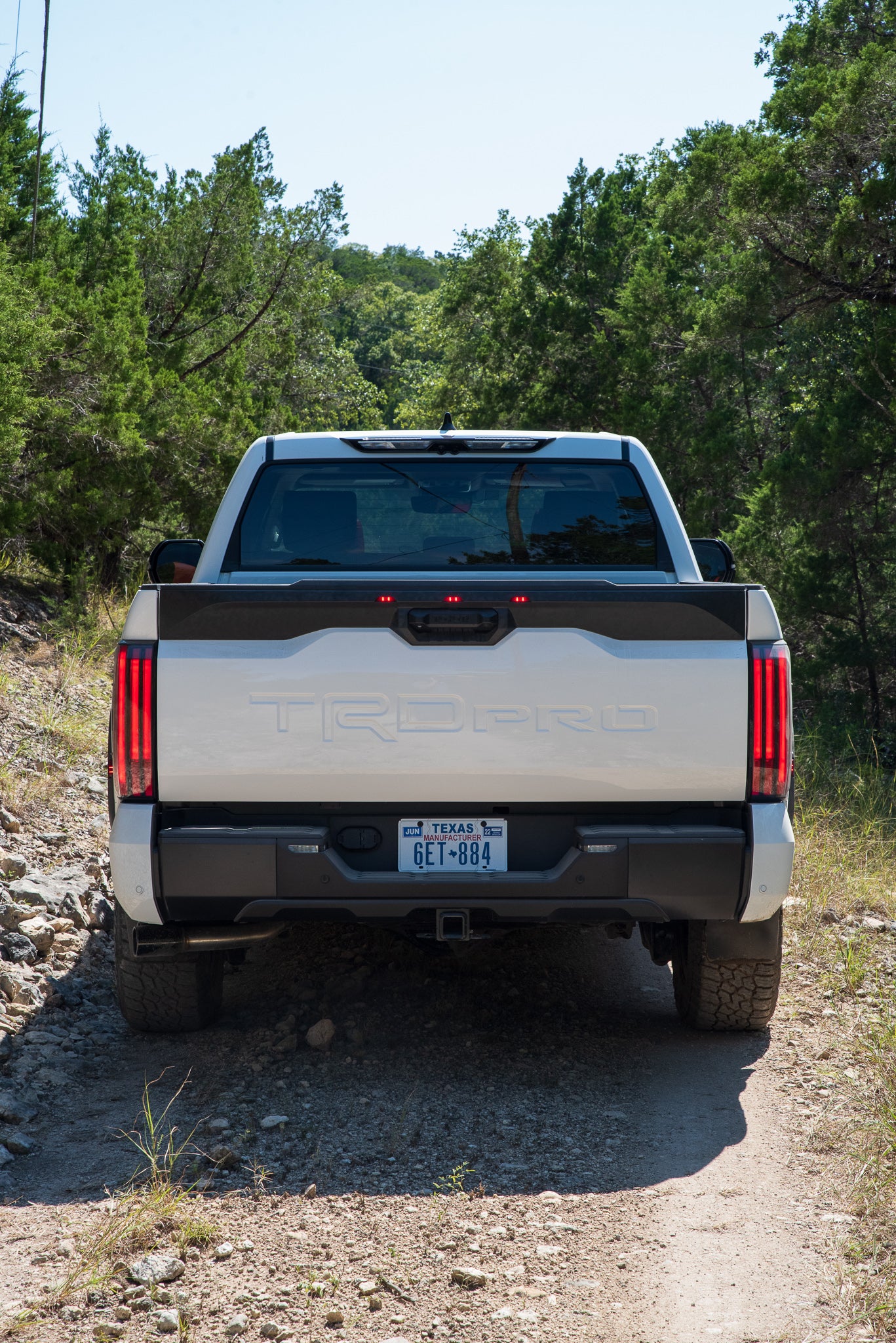 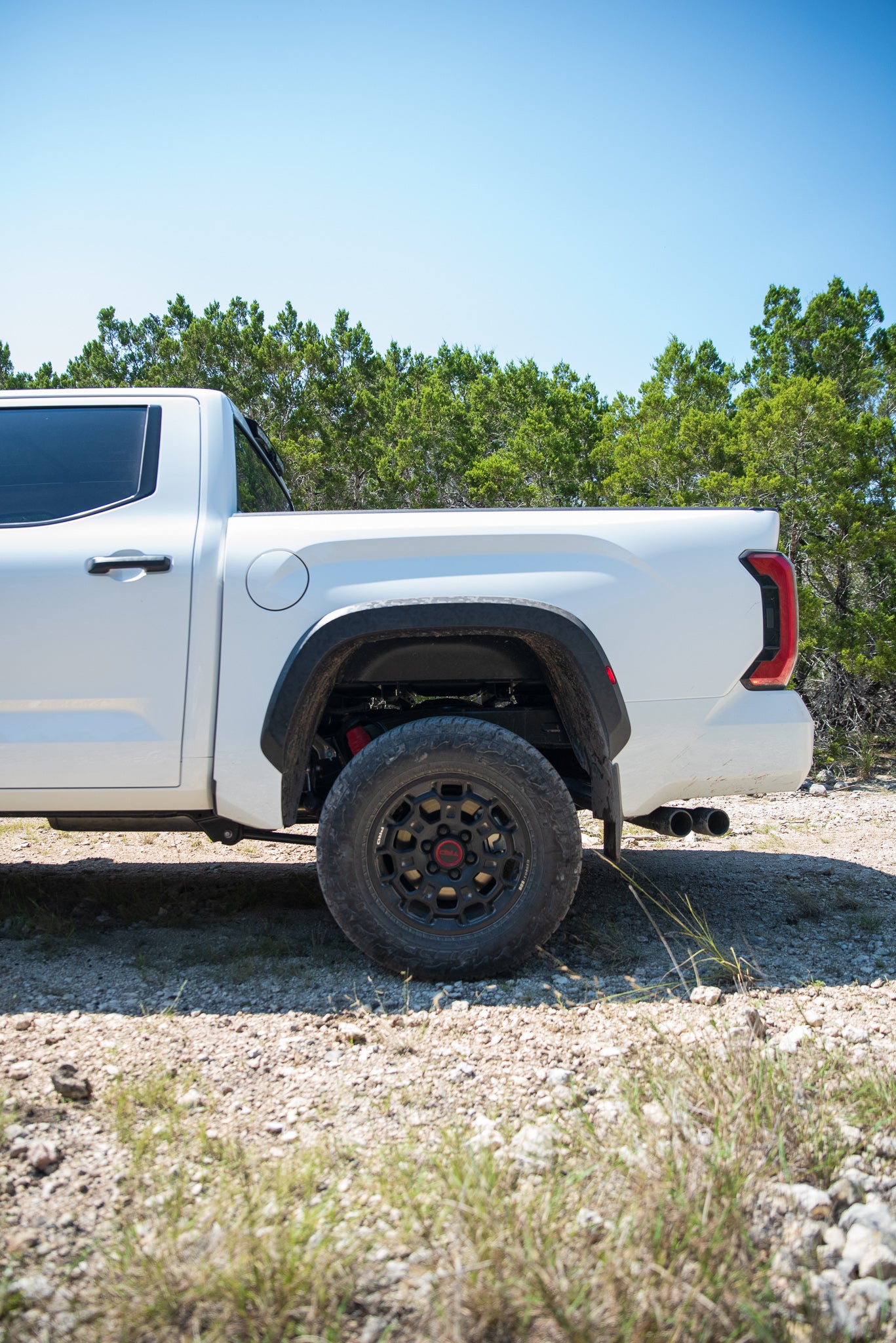 With those necessary updates over the old Tundra in mind, let’s discuss the TRD Pro’s powertrain and suspension. It’s propelled exclusively by the new 3.5-liter, twin-turbo V6 hybrid making 437 horsepower and 583 pound-feet of torque. The latter is unmatched by any half-ton truck this side of the Hellcat-powered Ram TRX, even beating the Ford F-150’s PowerBoost hybrid, which isn’t even available in the off-road-focused Tremor variant. Power is sent to all four wheels, whether the transfer case is in high or low range, through a 10-speed automatic transmission. On the more technical trails, you’re unlikely to see much above second gear.

Peak torque now comes on at just 2,400 rpm, a benefit of the small-displacement turbo engine that sure beats the old Tundra’s 5.7-liter V8, which had to spin to 3,600 rpm to muster 401 pound-feet. This is the most obvious update to the 2022 model and, as a result, we won’t spend so much time talking about it. You can read my full review of the new Tundra here, where I talk about the hybrid iForce Max powertrain being a real good time.

The suspension, as any wise four-wheeler will tell you, is crucial when the going gets rough and rocky. And just as the 2022 Tundra’s five-link, coil spring rear suspension brings about comfort and towing improvements, it also lends itself to better trail performance. Articulation was plenty impressive when driving through purposely dug pits on the trail Toyota put us journalists on, and I nabbed these shots as proof: 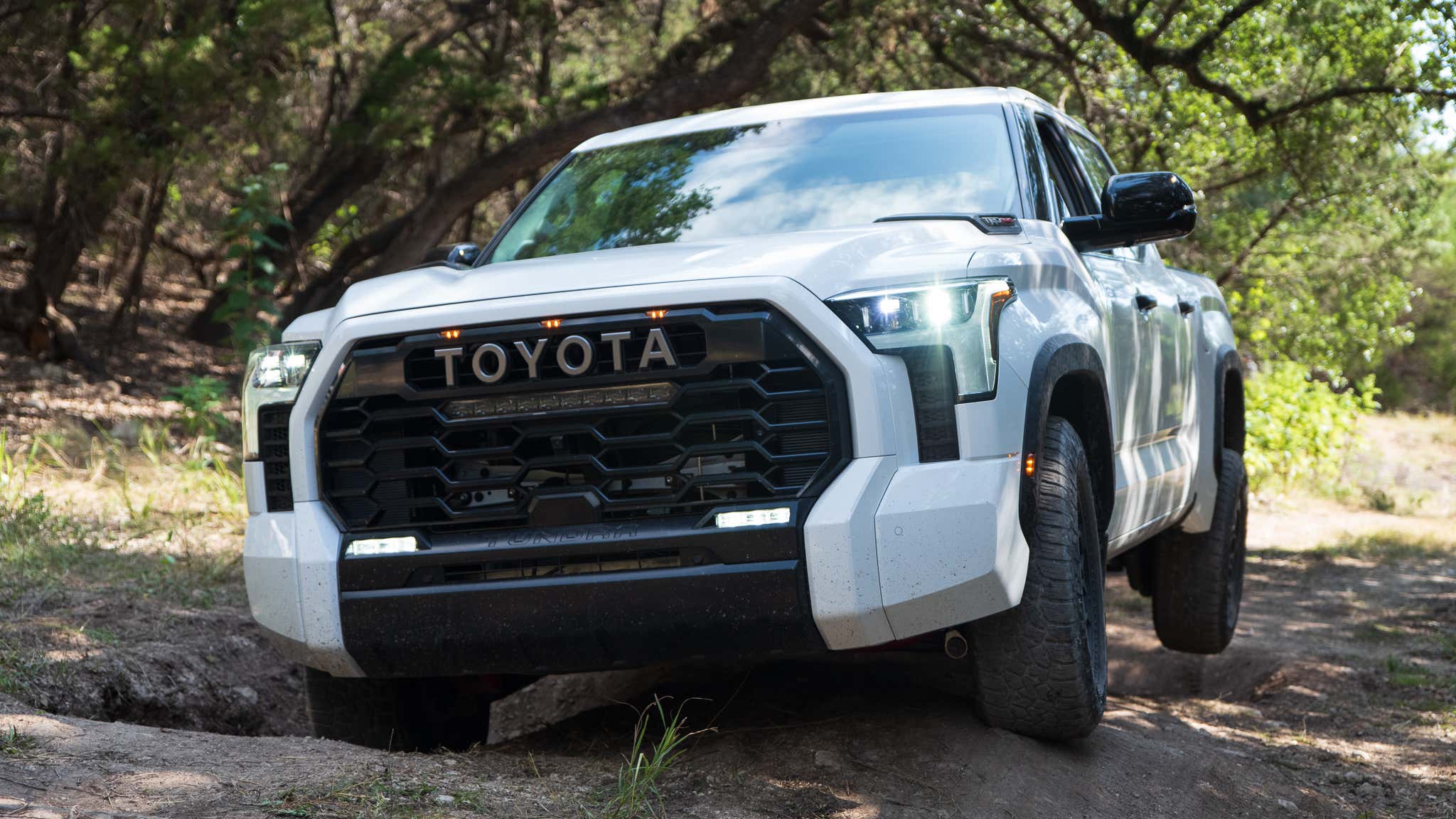 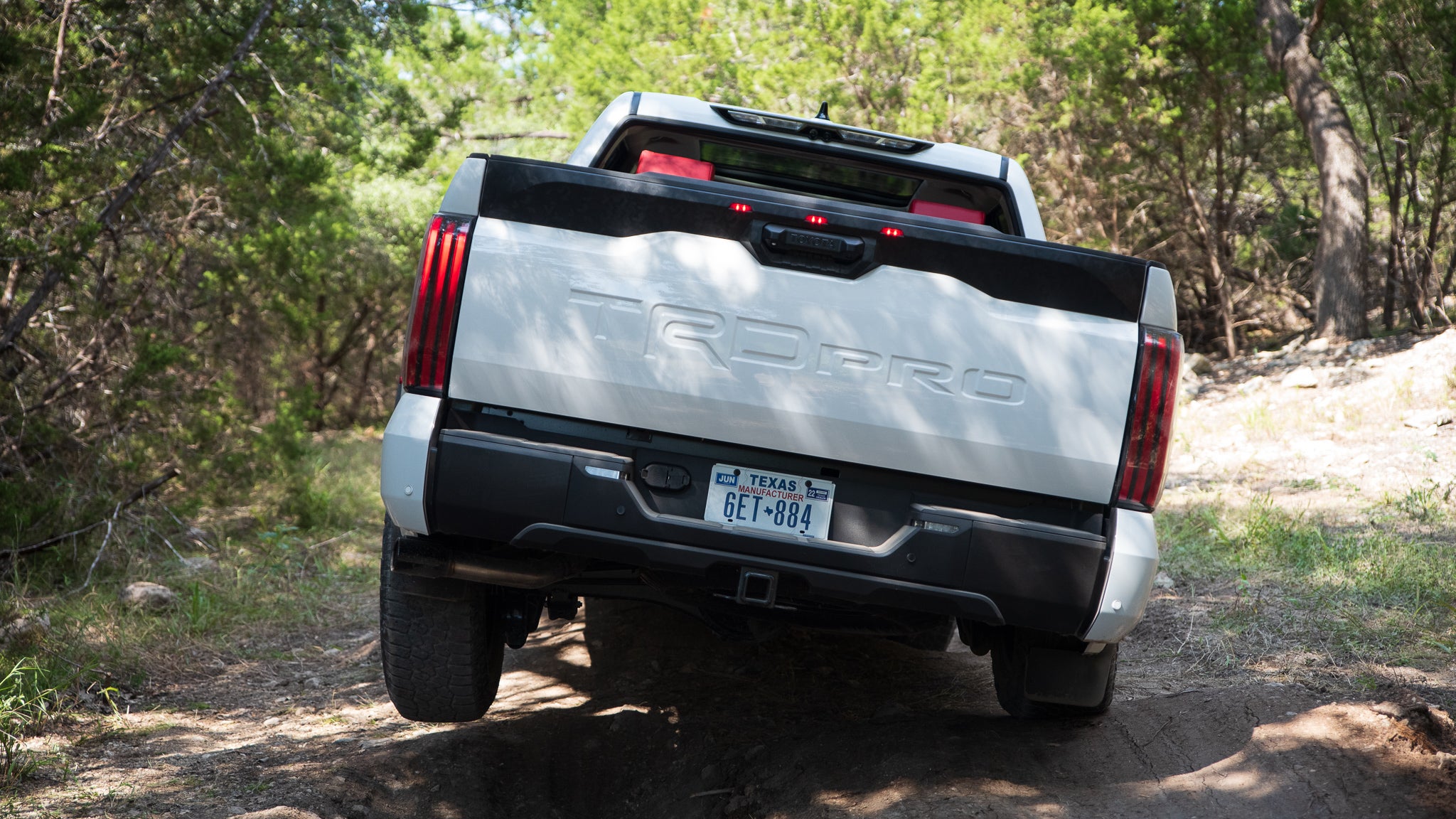 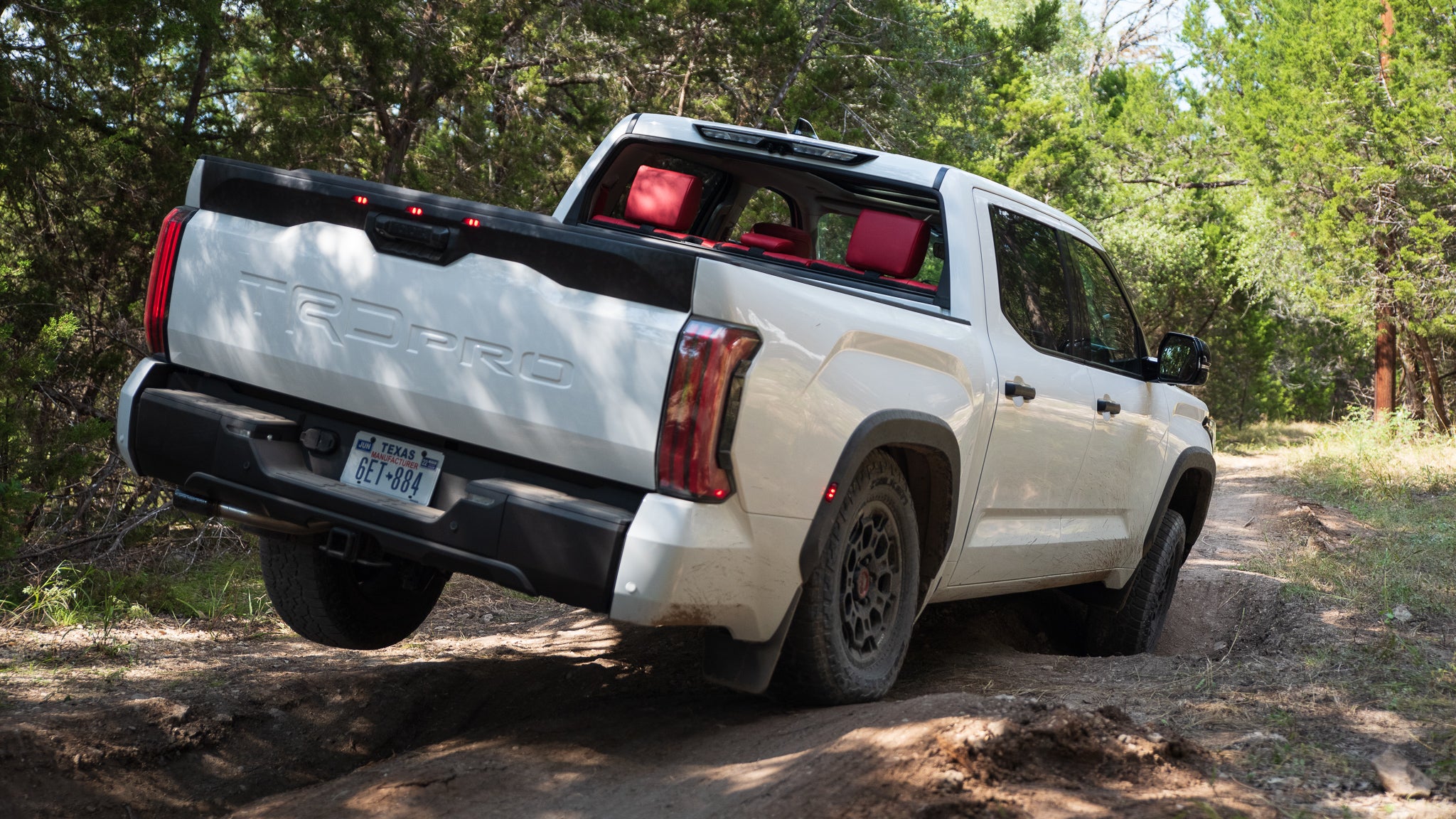 Those 2.5-inch Fox dampers smooth things out noticeably and I wish I would’ve got to test them more at higher speeds. A thick TRD Pro stabilizer bar helps up front as well, though it doesn’t have an electronic disconnect like the Jeep Wrangler Rubicon or Ford Bronco Badlands. The ride is smooth, though, without a doubt, and it’d take some special hardware for an aftermarket kit to be considered a true upgrade.

With a 1.1-inch suspension lift and those 33-inch Falken Wildpeak AT rollers, the Tundra TRD Pro’s running ground clearance measures 10.9 inches. That’s a little less than the Silverado ZR2 offers (11.2 inches), and you’ve gotta keep in mind the Tundra’s size. From front to rear, it measures 233.6 inches; that’s 2.5 inches longer than an F-150 Tremor, and the outgoing Tundra was just 228.9 inches. It’s also wider than the pickup it replaces, meaning you’ll have to embrace the pinstripes if you follow your buddies through the thicket. With its hybrid powertrain and underbody cladding, the TRD Pro tips the scales at just over 6,000 pounds—not Hummer heavy, but still a lot.

These are the prices you pay for going off-road with a full-size truck. People who know what they’re getting into probably won’t mind that it’s so big or else they’d go for something smaller, like the Tacoma. That truck’s next generation should come in the next few years, so if you’re wanting all these 4×4 niceties in a more compact package, you’ve just got a while to wait. Otherwise, the 2022 Tundra TRD Pro is a capable truck you’ll be able to buy directly off the dealer lot in the spring of 2022.

Got a question about the 2022 Toyota Tundra? Drop a comment below or email the author: [email protected]