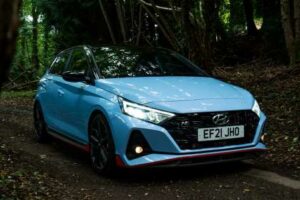 While Ethan has become Car Throttle’s dedicated Skoda reporter, I’ve found myself being thrown the keys to more and more interesting new vehicles recently. I was particularly pleased to check my emails and see that a Hyundai i20 N was headed for my driveway imminently. Growing up in early 2000s Britain gives you a natural soft spot for anything mildly warm that comes bearing a hatched back. In fact watching a tatty Saxo tearing around the local Tesco car park was as enthralling as automotive content could get in the eyes of 10 year old Edwin.

Naturally then, Hyundai’s smallest ‘N’ model shot to the top of my ‘want list’ when it was first announced. A supposed two finger salute to the fat and power heavy ‘hot hatches’ of today. No 400bhp tagline causing pointless forum arguments, no trick all-wheel-drive system saving you from your own terrible driving. Instead; a simple FWD city car tightened up to demolish backroads, with a little extra power. Bliss.

And here it is. Off the bat I think Hyundai has managed to capture that ‘90s and early ‘00s ‘sport’ feel that is so often missing on hot hatches these days. I’m sure the silly little red strips and canards on the i20 N are pointless (regardless of what some windtunnel boffin will say), but they feel right. Paired with Hyundai’s now recognisable ‘Performance Blue’ that this car is painted in, I think it completes the hot hatch package perfectly. It doesn’t take itself too seriously.

Under the skin lies a 1.6-litre four pot making 201bhp and 203lb ft of torque, which when paired with the 1190kg weight, is good enough to send you to 62mph in 6.7 seconds. Just like its arch rival, the Ford Fiesta ST. But figures aren’t what we’re looking forward to most. The mechanical LSD is for me the star of the show, and something I’m looking forward to exploiting as much as possible in the coming months.

So we’ll spend the next few weeks getting to grips with the i20N and report back our findings. For the meantime though, what would you like to know about the i20 N?