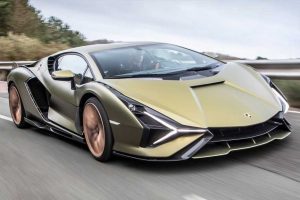 Not your average hybrid.

The 2021 Lamborghini Sián will catapult to 60 mph in 2.8 seconds and hit 220 mph, leaving in its wake a shock-and-awe wall of sound from its mighty 6.5-liter naturally aspirated V-12. The Sián is long and low and extreme, with a menacing, almost alien road presence that signals its status as a tarmac predator ready to pounce and devour random Ferraris. The Sián packs an 807-hp punch, making it the most powerful Lamborghini road car ever built. It’s also Lamborghini’s first-ever gasoline-electric hybrid. But we’re a long, long way from Toyota Prius territory here.

The limited-edition Sián is fundamentally an Aventador SVJ with more radical exterior styling and a redesigned interior that features a new center console with fewer switches and a portrait-oriented touchscreen. Just 19 roadsters and 63 coupes will be built, all constructed to celebrate the founding of Automobili Lamborghini in 1963. The coupe costs $2.64 million, and 15 of them are coming to the U.S. No word on price yet for the roadster, U.S. versions of which will arrive between May and December, but it’s safe to say that if you need to know, you can’t afford it. Finally, its name was amended after its debut to include “FKP 37” to honor late Volkswagen Group chairman Ferdinand Piëch, who was born in 1937.

Hybrid hypercars are nothing new. We tested Porsche’s 918, McLaren’s P1, and Ferrari’s LaFerrari—200-plus-mph hybrid-powered rockets all—way back in 2015. Lamborghini’s Sián is a little late to the party, but it unveils a technology claimed to be the next big thing for high-performance hybrids: the supercapacitor.

A supercapacitor stores electrical energy, but unlike a battery, it doesn’t bind that energy in a chemical reaction. Instead, the supercapacitor stores electricity in a static state. That means it can be recharged almost instantly and can hold more power than a typical lithium-ion battery of the same size. Supercapacitors also have a longer working life than regular batteries and function at temperature extremes that flummox most battery chemistries.

There are downsides, however. Supercapacitors self-discharge more rapidly than lithium-ion batteries, losing 10 times more energy over a 30- to 40-day period. Supercapacitors are also much more expensive than batteries, and their cells have a lower voltage. But automakers around the world are pursuing the technology, and the global automotive supercapacitor market is reckoned by some analysts to be worth $7 billion by 2028.

Three times more powerful than a battery of the same weight and three times lighter than a battery producing the same power, the supercapacitor in the Sián snuggles in the bulkhead between the cabin and the engine compartment and powers a 34-hp electric motor mounted to the side of the Sián’s automated manual transmission. That’s not much—even a Prius Prime packs 95 horses of pure electric power—but the Sián’s hybrid setup has not been designed to allow this Lamborghini to glide with its internal combustion engine shut down. Indeed, there is no pure EV mode. Instead, the e-motor is there to provide quick-fire torque fill at speeds of up to 80 mph.

The Sián shares much of the Aventador’s mechanical hardware, including its seven-speed single-clutch transmission. The single-clutch design demands a rapid cutting of ignition during gearshifts to reduce the torque loads in the transmission. During normal driving in the Aventador’s most amenable drive mode, Strada, that sometimes results in herky-jerky progress; in max-attack Corsa mode, it means thumping shift shock that feels like you’ve been hit in the back of your head with a shovel.

But not in the Sián. Even in Corsa, with the transmission in its manual mode, your right foot buried, and that big V-12 bellowing, the Sián slips crisply from gear to gear, the little electric motor stepping in to smooth the interruptions to the torque flow. In Strada, with the transmission set to automatic, the big Sián will mooch along much more calmly and contentedly than the Aventador. You can watch the boost and recharge displays dancing up and down on the touchscreen display as the supercapacitor first discharges to feed the e-motor, then instantly recharges—ready for more.

Under all the sound and fury is a chassis that, dare we say, feels grown up. Early Aventadors oozed menace, with a wayward demeanor that demanded your total attention through fast corners and brakes that went out to lunch if you worked them too hard on a track. But with each iteration since, Lamborghini chief technology officer Maurizio Reggiani’s engineers have poked the beast back into the cage. The long, wide Sián still fills a road, but both ends of the car know each other. The talkative steering is pin-sharp, the ride taut. You know what all four wheels are up to, all the time. And you can trust the brakes.

This Hybrid Hypercar Is a Proper Lambo

The Sián might be better mannered than an Aventador, but it’s as intensely visceral an experience as you’d expect a big-banger Lamborghini to be. New titanium inlet valves and tweaks to the engine management system mean the 6.5-liter V-12 bangs out 774 hp at 8,500 rpm on its own, the most ever from a Lamborghini road car’s engine. With no turbos to dull the response or muffle the noise, the big V-12 is simply glorious above 6,500 rpm; it’s brilliantly alert and ready to give it all, right to the redline. The world will be a grayer place when emission controls and fuel economy regulations finally consign this engine to the history books.

Yes, the Lamborghini Sián is a hybrid, though the system is fundamentally used to solve a drivability issue in an aging but still deeply charismatic powertrain. The lightning-fast supercapacitor technology is fascinating, right on brand for Lamborghini, and not without promise: Tesla spent $218 million acquiring supercapacitor firm Maxwell Technologies in 2019. Finally, the Sián serves as proof the words “Lamborghini” and “hybrid” are likely to get even better acquainted in the future.