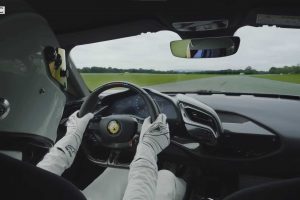 Some say it’s faster than the 488 Pista, and they’re right.

A long time ago in a galaxy far far away, a man named Jeremy Clarkson declared that when Ferrari’s Formula 1 program wasn’t doing so hot, its road vehicles were absolutely sublime. It’s now 2020, Scuderia Ferrari is having its worst season in recent history, and the SF90 Stradale is one of the most potent road cars to leave the Maranello gates.

Thanks to three electric motors – two at the front and one at the rear – and its twin-turbocharged 4.0-liter V8 engine, the Italian supercar produces 986 horsepower (735 kilowatts). Even with such a delicious amount of power on tap, the SF90 is well behaved during its departure off-the-line; after a flurry of gear changes, turn 1 at Dunsfold comes up in an instant.

Even through the hard braking zones required for turn 1 and Hammerhead corner, the vehicle’s brake-by-wire system appeared to provide plenty of feel for the Stig to drop anchor as late as he dared.

Join owners and enthusiasts discussing this topic at FerrariChat.com!

While it does produce immense numbers, the car is designed to be equally sharp in the corners. The SF in its name signifies Scuderia Ferrari, which takes after the F1 stable where Charles Leclerc and Sebastian Vettel reside. Thanks in part to its electric motors, the vehicle is able to give more torque to the outer wheels when cornering, making anyone feel like a hero behind the wheel; even in medium-speed corners like Gambon and Chicago, initial turn-in appeared effortless.

Along with mass amounts of mechanical grip, the Ferrari produces quite a bit of downforce. Thanks to its carefully sculpted body panels, rear wing, and diffuser, high-speed sections of the track like the follow-through are handled at unimaginable speed for a road vehicle. Sure, the SF90 can’t take the corner flat out, but a small lift at corner entry is all that’s required to get the nose to comply.

The video didn’t provide an exact lap time, but we clocked the Italian supercar at just above 1 minute 11 seconds, beating the 488 Pista by a speculative half-second margin. Timing aside, it’s clear that the 488 Pista and SF90 Stradale are two blisteringly fast Italian supercars, and we can’t argue with that.