Watch Kentucky Residents Still Getting Used To Their New Roundabout 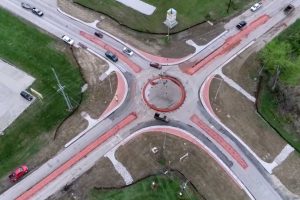 There’s a new roundabout in Kentucky but unfortunately, nobody taught the residents how to use it. Roundabouts may be commonplace across the globe but in America, they’re a rare sight. That means that most Americans don’t know how to use a roundabout unless they’ve spent some time living next to these rare sites. A roundabout recently opened in rural Kentucky to improve safety and traffic flow. Let’s see how they’re doing.

Well based on a video shared on Reddit by u/EVOsexybeast things have not gone to plan. When you first approach a roundabout after spending your entire life using four-way intersections it can be shocking, to say the least. Based on research by Kittelson & Associates there are about 7,100 roundabouts in America which makes them incredibly rare.

According to coverage from CBS WYMT, the Rowan County Kentucky-based roundabout was used to replace a four-way intersection that saw about 4,000 cars a day. This particular intersection had a history of devastating collisions and the town council felt a roundabout would be a great solution to keep traffic flowing and reduce the severity of crashes. This is most likely true on paper, but in practice, drivers need to know proper roundabout etiquette to make it effective. Thankfully GPS services like Google Maps, Apple Maps, and Waze can all properly guide you around a roundabout.

The roundabout has only been in place for a couple of weeks so there’s a huge opportunity for improvement. Based on the video we can see that one mistaken driver can lead a whole caravan of followers down the incorrect side of the road. Let’s hope that experienced roundabout users can help out confused drivers and lead them to safety in the future.