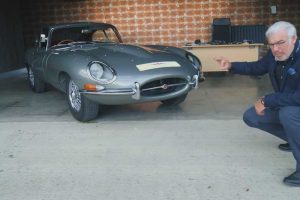 Designer Frank Stephenson, who penned the Mini Cooper, the Maserati MC12, the Ferrari FXX and the F430 as well as the McLaren P1, 675LT, 570S and 720S, has created quite a nice little YouTube channel over the past several months of the pandemic. It started with the “How I Designed It” series and now has moved on to “My Dream Garage.” This episode features the legendary Jaguar E-Type.

Stephenson retells the story of the first time he saw an E-Type, which stopped him in his tracks in Morocco. He quickly goes into a walk around, talking about what he likes and doesn’t like. Spoiler alert, he likes most of it.

He then retires to his drawing desk to do it better.

Stephenson decides to lift the fenders—after explaining he hasn’t rendered a car in a few years—fix the headlights, pull the front end forward and slightly change the air intake, among other things.

He’s a master, and it’s a joy to watch him work.