Watch A Stock McLaren 765LT Smash Out A 9.41sec Quarter-Mile 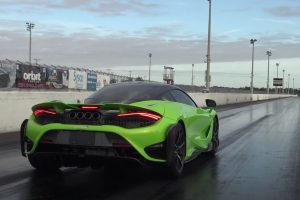 The McLaren 720S is known to be a spectacularly fast quarter-mile weapon, so it should come as no surprise that its 765LT big bro ups the straight-line ante nicely. With 755bhp it’s significantly more powerful, and also 80kg lighter, making for incredible standing quarter potential.

The quarter-mile time comfortably beats the stock Dodge Challenger SRT Demon‘s 9.65sec factory figure, the fastest official time for a production car. It’s also one stock Demons have struggled to better or even match IRL. With that in mind, we the 765LT can be (unofficially) crowned as the fastest production car over a quarter-mile.

You might think a 992 Porsche 911 Turbo S stands a chance of knocking Woking’s finest off its perch, but when tested over a quarter-mile by Car and Driver, it took 10.1 seconds to cover the benchmark, hitting 60mph in 2.2 seconds.

What makes the 765LT’s effort so impressive is the rubber used for the initial runs. It wasn’t even with the stickier Pirelli Trofeo Rs fitted with as standard, rather the more wet weather-friendly boggo P Zeroes McLaren offers as a no-cost option. With these boots, the LT was leaving the line cleanly but spinning up in second.

To remedy this, Brooks from Drag Times chucked on some 720S wheels shod in Toyo Proxes R888R semi-slicks, eliminating that second-gear squirrel and eventually trimming the best time down to just 9.34 seconds.