Watch a Ram TRX Struggle Through a Sketchy Nurburgring Lap 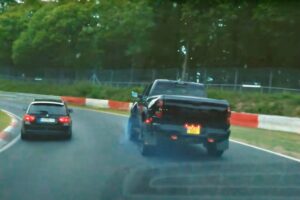 Tipping the scales at 6,350 pounds, the 2022 Ram 1500 TRX is among the last vehicles anyone would consider appropriate for a track day, much less the most harrowing race track on earth; the Nürburgring. But as one British YouTuber found out, the TRX is surprisingly happy at The Green Hell if the driver applies its off-road chops to mow the grass at every apex.

The privilege of wringing this Ram ’round the ‘Ring fell to BTGDale, who borrowed the truck from Audi tuner MilltekSport, which apparently uses the TRX as its tow vehicle. He took the truck out on track pursued by a tuned, similarly powerful Audi RS Q8 chase car, which used a dashcam to capture the best moments over the course of the lap.

702 horsepower and 650 pound-feet of torque haul the supercharged TRX up to its 118-mph speed limit, and force the more than three-ton pickup to brake well in advance of corners to avoid overheating its brakes. Even so, smoke begins to puff from the fronts within a few corners, which BTGDale speculates to be the pads overheating.

After learning to nurse them, though, he finds the truck’s rhythm and ends up passing countless cars with the Ram’s sheer power, oftentimes dipping two wheels off to make sure he has enough space to safely pass. Despite the chase car’s driver observing the Ram “rocking like Noah’s Ark,” the TRX apparently corners remarkably well relative to other trucks that have taken to the ‘Ring, giving him the confidence to kick its tail out a little and lay down a black stripe.

Altogether, the lap looks like quite the hair-raising experience—though it’s one most of us would be all too giddy to have for ourselves.