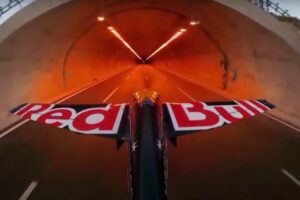 If you’ve played Grand Theft Auto V for a decent period of time via one of its many ports, it’s likely you tried flying a plane through a tunnel. And equally likely you failed. Just to make you feel even more rubbish about that, such a stunt has now been done for real. Twice, technically.

On Saturday, Italian race and stunt pilot Dario Costa took a 1.4-mile flight through the two Çatalca Tunnels on the Northern Marmara Highway near Istanbul, Turkey. The footage, as you might expect, is spectacular. The aircraft is seen taking off in the first tunnel before flying through the second at an average speed of 152mph.

The operating window for Costa’s Zivko Edge 540 V2 was tiny. He couldn’t be any less than 70cm or more than 1.6 metres off the ground. Either side, he had a mere four metres of clearance between the wingtips and the tunnel walls.

Other challenges included crosswinds between the two tunnels and a change in shape during the second tunnel that decreased lift. Costa had to react to any changes in airflow in under 250 milliseconds. Just to complicate matters further, the second tunnel has a slight incline towards the end.

The stunt was a year in the making, with 40 team members behind the effort. Costa had to go through extensive training at the Red Bull Athlete Performance Center in Austria, during which time he improved his reaction times and studied simulations built using a laser scan of his aircraft and accurate measurements of the tunnels. The final piece of the puzzle came from bombing through the tunnels in a car at nearly 170mph.

The preparation was certainly worth it. Along with creating an incredible video for the world to enjoy, Costa set the Guinness World Record of the longest tunnel flown through with an aeroplane (1,730 metres), something we can see standing for some time. It was also the first known successful attempt at flying through a tunnel, the first flight through two tunnels, the first tunnel takeoff, and the longest flight under a “solid obstacle.”