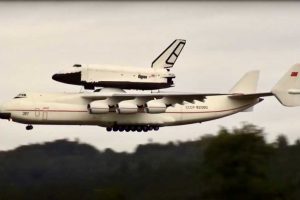 On its surface, scale modeling is one of those hobbies that sounds like a cheap way to have fun with motor vehicles. It’s a tiny car, plane, or train—how much could it cost? As it turns out, shocking amounts of money.

People can drop thousands on detailed brass locomotives that fit in the palm of your hand or building remote-controlled airplanes with real combustion engines. Imagine, then, what kind of money and time it takes to build not just a flying replica of the world’s heaviest plane, but one that can launch a flying version of the Soviet Union’s space shuttle from. If you think that sounds like a job for the Swiss, you’d be right, as we’re featuring the work of a Switzerland-based modeler named Hans Bühr.

Bühr is the brain behind a roughly 1:25-scale model of the Antonov An-225 Mriya, a Soviet-era heavy cargo plane with six jet engines and the biggest wingspan of any plane in service today—yes, the one example ever completed is still flying in 2020. The Swiss modeler’s 11.5-foot, 26-pound Antonov isn’t the biggest known flight-capable An-225 replica, but it is the only one capable of launching a flying rendition of the Buran, the USSR’s stillborn copy of NASA’s space shuttle.

While Bühr demonstrated this capability at an RC air show in 2018, we recently came across the awesome video, so we knew we had to share. The coolest part: hearing the crowd’s reaction when the two aircraft separate.

The Buran was designed only to be transported by the An-225, never launch from it, the lack of rocket propulsion means the Buran can split from its host aircraft and glide safely down to the runway. One can’t help wondering whether it would be controllable if equipped with a small chemical rocket, but that’s for us to wish for and Bühr to decide.

There’s no faulting him, after all, for not wanting to risk incinerating either of his magnificent little models for the sake of what amounts to an awesome party trick. Nevertheless, this is just one example of what you can do with tongs of expertise, patience, and we’re sure a decent amount of coin.