VW Will Use 3D Printers to Make Metallic Car Parts 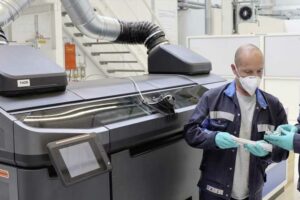 3D printers have certainly become more affordable over the past decade, to the point that you can buy one for about the same money as a laser printer, which has been the goal of 3D printer manufacturers for some time. And while you can certainly 3D-print plastic parts for your own car, for a long time this seemed like it was just about the limit of this type of technology: Private printer owners making small parts out of plastic when they couldn’t source some rare part for their old car.

But automakers are now working on using 3D printing metal parts in the process of manufacturing new cars, and finding ways to make it more cost-effective than using other production methods.

Volkswagen has been working on 3D printing metal parts using the binder jetting process, as opposed to using a laser to fuse layers of metallic powder. The binder jetting process uses a printhead to deposit an adhesive over a layer of metal powder, which then quickly solidifies, and then an extra layer of powder is added over it, allowing the process to repeat. It’s not too dissimilar from using a laser to fuse the powder, but it uses a printhead (like in a paper printer) to deposit a liquid adhesive, which is then cured. This method can work with sand, composites, ceramics or metals.

VW is now using this method, which is faster than the laser and powder approach, to print parts that the automaker points out weigh just half as much as parts from sheet steel. The automaker has partnered with HP on the printers themselves and with Siemens for the software for this type of manufacturing, having invested tens of millions of euros over the past five years in scaling up this technology, with the aim to produce 100,000 parts at the Wolfsburg plant each year by 2025.

“The first components made using the binder jetting process have gone to Osnabrück for certification: components for the A pillar of the T-Roc convertible. These weigh almost 50 percent less than conventional components made from sheet steel,” the automaker notes.

Lighter weight is certainly an advantage of this particular method, but where strength counts automakers still use traditional sheet metal stamping or machining methods to create parts. 3D printing also provides the advantage of being able to produce many different parts in the same workspace by merely loading a different program into the computer—floorspace is thus conserved, and new dies don’t have to be manufactured in order to stamp parts.

3D printing is not new in the automotive world per se, as design studios and schools have been using it since the 1990s to create styling bucks and other components of various sizes, using computer-aided design. Now, it’s a real challenge to find something that isn’t computer-aided when it comes to manufacturing design concepts.

“Today, there are 13 units at the Wolfsburg plant using various printing processes to manufacture both plastic and metal components,” Volkswagen says. “Typical examples are plastic components for prototypes such as center consoles, door cladding, instrument panels and bumpers. Printed metal components include intake manifolds, radiators, brackets and support elements. Over the past 25 years, more than one million components have been produced.”

Have you thought about buying an inexpensive plastic 3D printer, or do you own one already? Let us know in the comments below.