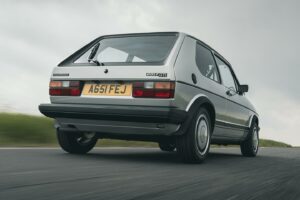 Rather like the Ferrari F40 or Jaguar E-Type, it often feels like we know everything about the Mk1 VW Golf GTI. Decades of reverential praise mean it’s hard to know what to say without fear of repeating what’s already been said countless times before. And yet 2021 marks another momentous year for the long-running hatchback. Having celebrated its 45th anniversary with the recent Clubsport 45, the next big birthday for the Golf GTI will be 50 in 2026. There aren’t many cars that can claim half a century of unbroken production – or the unstinting popularity that has unwritten virtually every generation launched.

There’s a broader point to consider about the GTI’s starting point, too. For the Mk8 Golf the three-door car has been dropped, and it would be staggering if manual outsold DSG Golf GTI. Cars like the Clubsport and R can only be bought with an automatic. With that in mind, is the original a timeless throwback, or now just an impossibly dated relic? Can it really still entertain when the modern hot hatch has reached a level of power, adhesion, responsiveness, rigidity and technological brilliance unimaginable in 1976?

Some history, first off, because we could probably all do with a refresh. After a motor show debut in 1975, what was once the Sport Golf project went on sale a year later with a 1.6-litre engine, 110hp and just the four gears – but crucially a kerbweight of only 840kg. A fifth gear would follow, as would a torquier 1.8-litre engine, and UK sales of the Mk1 began in 1979. From then until some point in the early 1990s when the original cabriolet finally went off sale, around 460,000 GTIs had been built. VW management had originally commissioned a run of 5,000 cars to test demand…

VW UK’s heritage fleet Mk1 GTI is a 1983 Pirelli Edition, meaning the 1.8-litre engine and the P-spoke wheels that would become iconic in time. On an A-reg, it’s from the end of Mk1 production, with the larger, heavier Mk2 Golf going into production the same year.

It’s a well-worn tradition in these sorts of stories to mention the shock at seeing a car so small being called a Golf. But, frankly, we’ve lived with bigger Golfs for such a long time now – and the line so often trotted out about the Mk1 being Polo/Up-sized – that you expect a tiny car. And that is what you get. The bigger surprise is just how good the GTI still looks for a car designed in the 1970s. Predictably, numerous details date it – small wheels and a vast glasshouse, most notably – but like the best industrial design there seems not a wasted millimetre. The Golf is taut, handsome and stylish, even now, which is probably why so many trademarks were carried through to later generations. Still, there’s nothing like being reminded in person just how nicely proportioned the first one really is.

Same goes for inside; a Mk1 now seems basic to the point of being spartan, but we knew that. What’s more relevant is how durable it all seems, and how contemporary it all feels from a driving perspective. Again, that sounds reductive, but no so long ago 40-year-old classics had a choke, the structural integrity of a Jenga tower and wouldn’t work on the days of the week Countdown is on. The (admittedly very well-kept) Golf starts on the key, a taller driver can get comfy and it all just makes brilliant ergonomic sense, with those archetypal dials straight ahead, the speedo reading to just 120mph and tacho going red just after 6 – perfect.

On the road that feeling of toughness and dependability is carried through. Plainly it is not the same driving experience you’d find in a newer Golf, but on the other hand you’d have no reservations about putting this into regular use, which is probably why those for sale now are often showing chunky mileages. It has the performance to sustain a modern pace, brilliant visibility and an ability to soak up the vagaries of a road surface better than might have been expected from a chassis in its fifth decade.

Hero status is not bestowed for those virtues, however. The Mk1 GTI finds itself in the hallowed hall of fame thanks to driving fun. Not until the Mk5 (and perhaps not even until the Mk7 Clubsport S) were reputations and expectations so utterly confounded by a humble Golf. Even in 2021 the 1.8-litre four-cylinder feels gutsy and willing, ensuring the little Golf strolls along confidently. Even allowing for a reluctance to rev and a very long gearbox throw, you’ll soon find the Golf rasping along at a decent speed. In a world of Cortinas and Allegros, it must have seemed searingly fast. In a world of 400hp hatchbacks, brakes that don’t do much braking help the Golf feel quicker than it probably is.

The corners are where the GTI really shows off its genius. Lower and stiffer than a standard Golf of the time, the Mk1 is predictably quite soft nowadays, though with its appetite for apexes is retained. That the steering lacks assistance only draws you into the process more; the Golf corners like a car even lighter than it is, bounding this way and that without concern and often with abandon. Its size makes even country lanes feel exploitable, the engine’s cammy bark perfectly matched to the chassis’ ability and your expectations. It goads you on, and into an easy grin.

If that’s not at the nub of hot hatch appeal, it hardly seems worth fathoming what is. For something old, basic and not that fast, the GTI has an uncanny ability to encourage the driver at every opportunity. Par for the course in a classic without a roof or with a big engine, perhaps – but a pleasant surprise when it’s summoned up by a fairly ordinary VW hatchback. One that still feels usable, too. Every roundabout is there to scoot around, each straight a chance to stretch a gear and hear the exhaust parp in approval, made all the more audible because the window will have to be down. The advancement of four-wheel drive systems and dual-clutch gearboxes and torque vectoring notwithstanding, the Mk1 is a timely reminder that raw, uncomplicated fun is still a mighty asset to have in the speeded-up hatchback’s arsenal. It was the segment’s original virtue, after all.

Which is partly why the cars are now so highly prized. While we’d love to say that the appreciation enjoyed by the Mk1 in the past decade or so has eased off, the very best cars are still commanding big money – this one is £36,500. At least in the Golf’s case (which isn’t always guaranteed with some classics) it isn’t hard to see why prices have risen, the combination of performance, style and good old-fashioned fun being easy to admire. Given what else is out there, perhaps it isn’t quite £30k of hot hatch fun, but then those cars won’t be a Golf GTI; they’ll be imitators. Don’t expect those feelings to get any less fervent as its 50th birthday approaches.