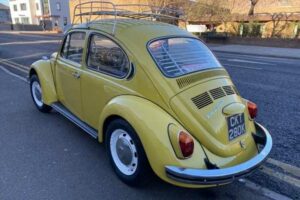 If I’m being honest, my initial reasoning for plumping for a classic Volkswagen Beetle 1300 was nothing more than trouble making: I knew it’d wind up Nic Cackett. He hates Beetles. In fairness, this is a position I can completely relate to. When my mate Adam, who was the eldest of our group, passed his test before the rest of us, he bought one. Therefore I spent a lot of time in it. It was a shiny, red 1300, and I hated it. So did he, actually, but only after he’d found out that underneath its glossiness it was held together by a combination of papier-mâché and hope.

When that little example of rust-bucketiness was offloaded, he only went out and bought another one. This time it was a Jeans special, based on a 1200. I hated that one, too. It came in a similar hue to the Camel-Trophy Land Rovers, which was fine, and inside it was meant to have a jeans-trimmed interior, which would also have added something, I guess. Only his one didn’t have denim: despite denim’s well-known durability, the seats had long-since disintegrated – or been removed and sold, perhaps – and replaced with that other everyday material known for its durability: vinyl.

Now, the other thing that vinyl is well-known for is its peculiar property of flitting between absolute zero and the temperature at the surface of the sun. And just in case your skin hadn’t been entirely melted away by or stuck to the seat material, the heat exchangers would finish the job off with their inept input to the in-car climate. I don’t know how, but somehow these would be stuck at full-on, Sahara-heat setting during the hot, summer months, and then, miraculously, when the ambient temperature plummeted, switched to freezing blasts at a temperature known only to those used to wintering in Siberia.

Beyond the temperature issues, I was also struck by how the Beetle, despite claiming to be a car, had more in common with the Little Grey Fergie, which, for those that don’t know, is the marvellous little Ferguson tractor born in the late forties. It was slow, noisy, rattly and had no suspension to speak of, and, believe me, the tractor wasn’t much better. Bearing in mind my car at the time was a Mk2 Opel Kadett (the same version as the Mk1 Astra), I wasn’t exactly living the high life. Yet in comparison to the Bug, it felt like I was travelling everywhere at the bleeding edge of luxury and modernity. And yet…

Here I am highlighting the bloody Beetle. And not just it to annoy NNC, as it happens. I am writing about the Beetle – or Bug, Bubbla, Boblen, Coccinelle, Foxi, Käfer, Poncho, Pulgaor, Volk, or whatever name you know it by, depending on where you hail from in the world – because over the three decades since I first learned to hate it, I’ve learned to like it. I am not sure when this happened, exactly, but sometime over the last five years or so I’ve started wanting one. Rather than hating its simplicity, I find myself fascinated by it. Not just mechanically, but also in respect to its looks. I like the nice, clean-sweep design that, for me, makes its British rival, the Morris Minor, look staid and podgy. (Please God, don’t let me start warming to that monstrosity anytime soon.)

It’s not just the Beetle itself, but also the story of its resurrection that’s quite charming. That the Wolfsburg factory survived the war at all is amazing, bearing in mind more than two-thirds of the city hadn’t. Then there was a plan was to dismantle it and use Ford’s plant in Cologne to produce cars for Germany’s domestic market. But, thanks to Major Ivan Hirst, that never happened. The factory was reopened: firstly, to repair military equipment, then to repair Beetles, before finally it started building them. From that acorn of productivity, the decimated city that was home to a population of 25,000 in 1949, many living in deprivation, grew to 60,000 by the end of the subsequent decade.

In that time, the factory, now under the stewardship of Heinrich Nordhoff, had become the largest in Europe and was producing 1,000 cars a day. It reached its millionth by 1955 and three-millionth by 1959. Off the back of this enormous prosperity, there was new housing, infrastructure and entertainment facilities built to support the factory’s mass of workers. And all that from a car that started life with around 25 low-compression horses and zero frills. Amazing, really.

You’ll be lucky to see double that power from this one, and although it has plenty of touring add-ons on the outside, inside it’s still pretty spartan. But even if you cannot bring yourself to see the appeal of the Beetle, at least try to appreciate this car’s condition. It’s described as rust free and in excellent fettle, having just had a full service, new brake pipes, fuel pipes and a new fuel tank. It’s also yellow with vinyl seats, so it’s dredged up some – now time has mellowed them – happy memories for me. And how many classics in this condition can you buy right now for sensible money, with the bonus of a flowery ‘love’ sticker in the rear window? None, I’ll bet. If that doesn’t make you smile, you have no heart, which is the reason why his nibbs definitely won’t be smiling when he reads this.