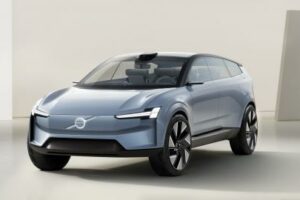 Volvo claims that the tech will not require either the driver’s hand on the steering wheel or eyes on the road.

Volvo has announced that it will introduce its new self-driving technology, called ‘Ride Pilot’ sometime in 2022.

The Volvo Ride Pilot technology will make its debut in the brand’s upcoming pure-electric vehicle, which is a successor to the XC90, previewed by the Concept Recharge last year. The upcoming SUV will feature the full-integrated Roof Lidar system from Luminar. The Ride Pilot system will be powered by a software developed by Zenseact – a Volvo subsidiary.

The Ride Pilot system is classified as a Level 3 autonomous system where the vehicle drives itself, without the need for human supervision. Volvo claims that the tech will not require either the driver’s hand on the steering wheel or eyes on the road. However, the driver will be required to take back full driving control at a moment’s notice.

The technology will initially be available only in California, USA, once the appropriate permissions are obtained. Post its debut, the tech will be offered as a subscription service to customers.