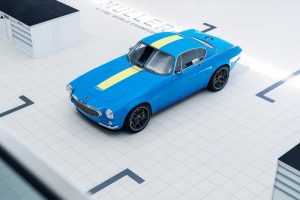 You’ve probably heard of Singer and maybe even Alfaholics, two manufacturers that reinterpret classic cars for the modern age. However, unless you’re a big World Touring Car Championship fan, you probably haven’t heard of Cyan Racing. The company that used to be Polestar is now parent-company Geely’s racing arm, and at present, it has won the WTCC three years in a row. But with the new P1800 Cyan, it is applying modern principles and engineering to one of the best-looking Volvos ever made, commemorating the outfit’s first touring car championship victory.

The original P1800 debuted in 1960—long before Volvo started building the boxy, brick-like cars that history so often remembers it for. It was a sleek 2+2 GT car that made a splash despite modest power from its 1.8-liter engine. The stunning reinterpretation is just as pretty as the original, with a simple yet beautiful unbroken shoulder line that runs the car’s entire length. The strip of chrome that extends from the door handle to the rear deck is there, as is the scalloped character line above the door, just as in the original.

But it has to drive as good as it looks. Thankfully, Cyan has turned the wick up a little bit for its re-creation. Under the new 1800’s hood sits a hot-rodded turbo 2.0-liter four-cylinder that makes 420 hp and 335 lb-ft of torque. Cyan claims it’s as responsive as a naturally-aspirated engine, and it revs all the way out to 7,700 rpm—a very high redline for a turbocharged engine. This engine helped Cyan with the 2017 WTCC and as such is a fitting tribute to the company’s racing success.

A five-speed dog-leg gearbox from Holinger has been fitted—and upgraded—to deal with the extra power and torque, but Cyan notes it stays true to the feel of the manual in the original car. The live rear axle that featured in the original P1800 has been canned in favor of a custom independent rear end fitted with a limited-slip differential that’s been designed from the ground up by Cyan.

The original body of the P1800 was made from steel, but Cyan has taken a more modern approach. The body panels have been made from carbon fiber and high-strength steel has been used where necessary. Weak points in the original P1800 were identified and strengthened by integrating carbon fiber into the chassis structure. The front track is wider than the original—which can now accommodate bigger and wider wheels and tires—and the A-pillars, B-pillars, and windscreen have all been repositioned.

Liberal use of carbon fiber and modern manufacturing methods ensure the Cyan P1800 is light; it weighs just 2,140 pounds according to Cyan. Lightweight 18-inch forged rims wrapped in Pirelli P Zero tires connect the P1800 to the road. Those P Zeros measure 235/40 at the front and 265/35 at the rear. Four-piston calipers clamp down on 14-inch brake rotors at all four corners, and there’s no brake booster to ensure the best possible brake pedal feel.

There’s no ABS, traction control, or other driving aids on Cyan Racing’s P1800. That means it’s just you and the machine—and the buckets full of cash you’ll no doubt need to cough up to buy one. Prices haven’t been announced, but these restorations never come cheap.